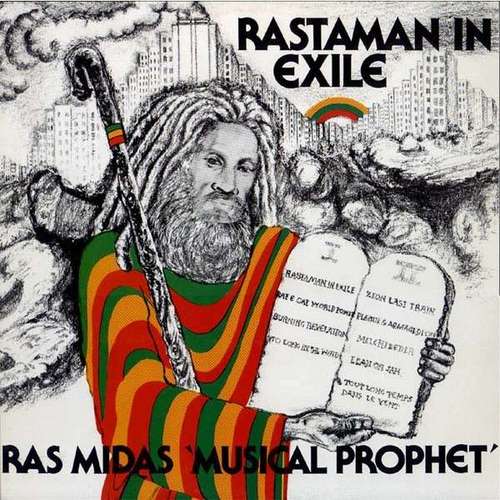 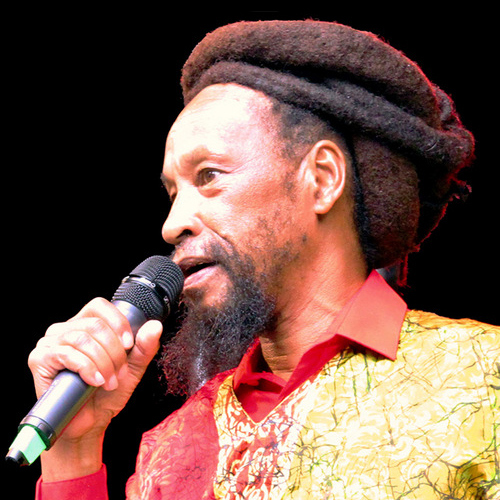 RAS MIDAS is known internationally as “The Musical Prophet;” a fitting name from early in his career. His tremendous catalogue is brimming with thought-provoking and prophetic message music. “Rastaman In Exile” was initially released and internationally celebrated in 1980. 36 years later, this landmark album has been remastered, extended, and is a necessary re-presentation. It clarifies “Musical Prophet” because the tracks are prophecy revealing, and the observations are a mirror reflection of today’s turbulence.

Volumes may be written about Ras Midas (“Head Power”) and his storied career. He’s been releasing his original message music since his 1974 debut, “Cover Me,” which signified the start of a long association at Harry J’s and legendary engineer Sylvan Morris (who remains a close friend to this day). His consistency through the decades is amazing. His first international hit, “Kude-A-Bamba,” sold 500,000 copies in 1978. He followed up with “Rain & Fire” (1979), “Rastaman In Exile” (1980) – voted “Reggae Album Of The Year” in France. He continued with “Stand Up Wise Up” (1984), “Loving Vibration”(1998) – voted Number 3 for Top Ten World Music Album, and the Grammy considered “Confirmation” (2000). His most recent effort, “Fire Up” (2010), saw the humble Rastaman in regal form. He’s a veteran of the international stage, captivating audiences with massive tours in 1976, 1979-80, 1980-82, 1984 and an extensive California tour in 1985-6. In 2014 and 2015, he performed in Europe, including a historic performance at Reggae Central XL (The Netherlands) and Reggae Jam in Germany. Can’t stop this Rastaman now…

The title track sparks the mind from the first note. Over an upfront riddim infused with Mr. Becker’s harmonica, Ras Midas delivers a history lesson with no apology. “Seven walls surround I… Rastaman in exile… will you set him free?” He’s always been a champion of fusing different genres into the Roots, and the Blues feel here is top ranking. In studio or on stage, early in his career, Ras Midas’ backing band was dubbed “The Bridge,” to bring people together with a diverse sound to bridge any gap. “Rat And Cat Power” is one of his finest arrangements. The horn rich and rootically anchored riddim is suited just right for Ras Midas’s poignant observation of what world leaders were up to then – and right now. There’s a superb “JAHzzy” feel that’s instant rewind category. “Trop Longtemps Dans Le Vent” is amazing on many levels. The first Roots Reggae song delivered in French by a Jamaican Reggae artist (he’s no stranger to singing hits in the languages of the world!), it shows how the King’s message is embraced in any language. A Sly & Robbie anchored riddim with Marcia adding ethereal backing vox. The English version is presented later in the album. This is an atmosphere that recalls classic JA sound with Mr. Becker’s harmonica adding pure FYAH. “Burning Revelation” is a Roots anthem with lush arrangements. Such a heartical delivery – “Revelation keeps on revealing… Men, you got to face this burning revelation.” Undiluted prophecy revealing over a richly orchestrated riddim. Remember, this was recorded live; Foundation wiser.

“Zion Last Train” is full Roots locomotion with no commotion. This is a firm look at the falsehood of Babylon ideology – They teach evolution to fight against Creation.” Ras Midas is in full command over a pulsating musical backbone with versatile overtones. “Plague And Armageddon” is one powerful musical episode! Over a horn driven riddim with Bingy Bunny’s gorgeous licks, Ras Midas depicts the atrocities going on locally and globally; truisms occurring to this day. A song to be heard again and again. “Melchizedek” is one of his deepest tracks indeed with pure education and history predominant. “Beware of the Kundalini feed upon your spinal glands of Rastafari.” A dreadly serious track presented in royal manners. Ras Midas has an ability to inject his uniqueness into classics. Consider his lively “Can’t Stop Rastaman Now” (“Stand Up Wise Up” album). On this album, he does an incredible Roots interpretation of the Bill Withers’ classic, “Lean On Me.” “Lean On Jah” was a British chart buster that’s a total upliftment and fulfilment of the essence of Rastafari. Symphonic proportions!!! “Too Long In The Wind” (“Trop Longtemps Dans Le Vent”) is a full display of his songwriting ability, his seamless strength of lyrics to riddim and simply captures the essence of “The Bridge” sound at that time. A thought-provoking track whose power blows in the wind to this very day.

The listener is treated to two extended cuts not included on the original album. “Let The People Go” is a Roots anthem of Zion proportions. A potent look at international financial institutions and their schemes with world powers. The hypnotic vibrations are taken to highest heights by the mastery of Roy Romeijn (Mabruku), whose crisp and tasty approach is so worthy to this project. “Natty Dread Surprise” shows the artiste inna soulful mood. He triumphantly exalts the works of Rastafari whilst exacting a seemingly personal story of his own journey in life. The taut and bubbling riddim is impeccable; dash in the Mabruku treatment and this is something truly special. A choice cut to close out this project.

Conclusion RAS MIDAS' "RASTAMAN IN EXILE" is an album that's been heralded as one of the most powerful and dynamic works in Reggae music history. The clear cut choice to re-present it in such a way was a wise and natural choice. An album that is past, present and future. A project that's a brilliant showcase of singer and players of instruments in one accord. One Love Revolution sounds all the way strong. An exceptional set that will intrigue the listener to seek out his fabulous catalogue. Highest recommendation. GO DEH!!