Various – Lion On The Rise Riddim 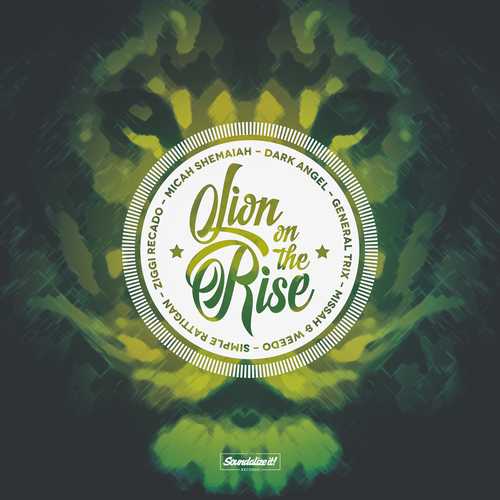 This ‘Lion On The Rise’-riddim album contains just too many tunes to be described as an EP, but not enough to be considered a full album. Nevertheless this digital-only mini-riddim-album is worth listening into definitely. The riddim has been built by Romanian reggae & dancehall producer Lion Riddims, who actually is indeed more a riddim-builder than a producer as he offers the riddims he creates for sale and/or licensing. The ‘Lion On The Rise’-riddim has been obtained by the young digital-only record label Soundalize It! also from Romania, out of Timisoara and they voiced several international artists over it, after already releasing several singles, EPs and an album by Romanian reggae, dancehall and even hip hop artists.

The very well arranged rootsy ‘Lion On The Rise’-riddim, with its horn accents and playful guitar-lick first backs Jamaican Simple Rattigan, whose great voice is used for a tribute to “Reggae Dub Music” and then Dark Angel a.k.a. Mowty Mahlyka from West London speaks out against “Dem Badmind” with his rockstone voice and the smooth singing and laidback-deejaying of Micah Shemaiah is perfect for the lovers tune “Worldwide View”. Holland’s own ZiGGi Recado delivers “High Grade Thing”, the standout tune on the riddim about the (in his country legal) holy herb in the same commanding style he uses on his recent “Ivan The Terrible”-EP.

France’s reggae-duo Missah & Weedo deliver the – despite its French lyrics, because these are probably not understood by all listeners to the tune – very catchy “Universal” before the last vocal contributed to the riddim is “Life Well Tuff”, a nice tune by General Trix. He comes like the Soundalize It! label out of Timisoara in Romania and adds the local flavour, though in flawless English, to this release. For melodica enthusiasts like me the “(Melodica Version)” adds to the strength of this mini-album that is closed by the clean version, highlighting the clever arrangement, of Lion Riddims’ “Lion On The Rise (Version)”-riddim.

Conclusion Recommended for all who like a well arranged modern roots riddim with some great vocals over it!