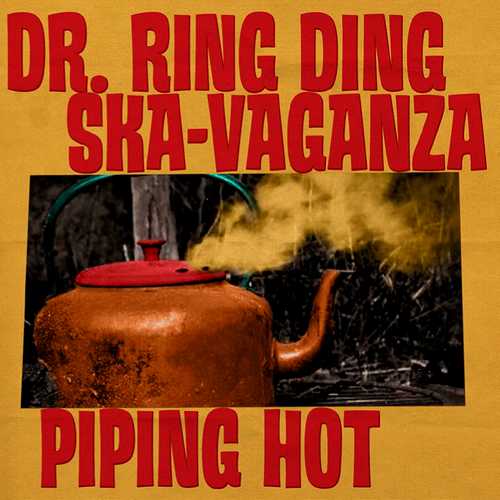 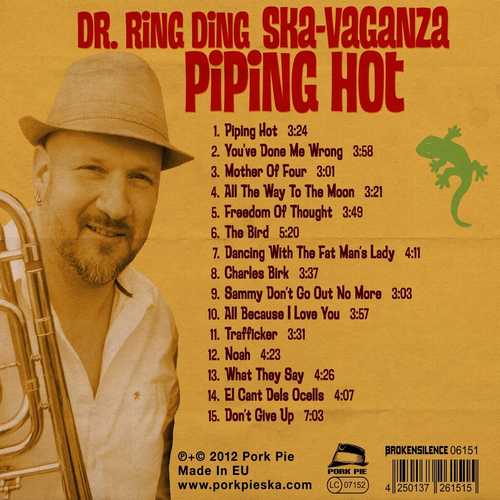 The recently reviewed “Bingo Bongo” was the sophomore album of Dr. Ring Ding Ska-Vaganza and actually, even 4 years after its release, the debut album “Piping Hot” deserves its own review too. Besides Dr. Ring Ding as its vocal and trombone frontman, he formed the band in December 2011 with members of Barcelona’s Freedom Street Band (formerly known as Ranking Soldiers), of course long-time musical companion Markus Dassmann, American songstress Stephanie K. on backing vocals and a Spanish & German mixture of hornsmen and percussion. Special guests each on different tunes are marimba player Altfrid M. Sicking and legenday first lady of ska Doreen Shaffer. The result is a great ska album, firmly rooted in its tradition, yet sounding fresh tune after tune.

The album opens with its stomping ska title track “Piping Hot” and then Dr. Ring Ding sings the very funny “Mother Of Four” and a tune that definitely could have been on any 60s vocal ska album “You’ve Done Me Wrong”. “All The Way To The Moon” is a wonderful sweet love song inspired by Sam McBratney’s beautiful children’s book “Guess How Much I Love You” and “Freedom Of Thought” is based on the German folk song “Die Gedanken Sind Frei”. The very upful original “The Bird” with its irresistable “Tweet tweet tweet” chorus is way slower, over a reggae instead of ska beat before returning to high paced ska for the excellent “Dancing With The Fat Man’s Lady, the instrumental jazzy tribute to his ‘Pépé’ “Charles Birk” and the very entertaining “Sammy Don’t Go Out No More”.

A lot of the vocal tunes on this album once more show that not only musically Dr. Ring Ding’s compositions grab the authentic traditional ska vibe, but so do his lyrics! Another sweet love song, calypso style, is “All Because I Love You” to which Altfrid M. Sicking adds something extra with his marimba followed by the instrumental “Trafficker” and the biblically inspired (not a strange thing for someone born into a parsonage) “Noah”. Almost ‘proverbial’ ska in “What They Say” seldom is the truth. With all the Catalonian in the band it might not be a surprise that a ska-reworking of this ‘secret anthem’ of Catalonia is included before the album is closed with a splendid take on Peter Gabriel’s “Don’t Give Up” sung together with the first lady of ska, Doreen Shaffer. A smashing closer of a must have album for lovers of traditional ska in particular and music lovers in general!

Conclusion A must have album for lovers of traditional ska in particular and music lovers in general!