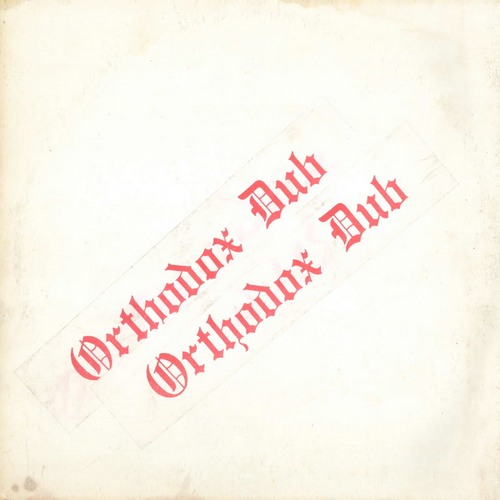 The ’70s saw a growing interest in radically remixed versions, which was called dub music. It was King Tubby along with other dub wizzards such as Errol “ET” Thompson, lee Perrry, Prince Jammy, Phillip Smart and Scientist, who added a further dimension to Jamaican music. By the end of 1976/early 1977 the dub craze had reached its peak with hundreds of dub albums being released, as every producer maximized the financial return of his riddims. However, most of these dub albums were pressed in very small quantities and disappeared quickly. And thus there are a whole heap of dub albums out there that can be marked as ‘rare’. Errol Brown’s “Orthodox Dub” is such an album.

In the early ’70s Errol Brown, a nephew of Duke Reid, was trained by engineer Byron Smith when he started as a junior engineer at his uncle’s Treasure Isle studio. His training was completed by the Duke himself, which turned out to be a serious drilling. After Duke Reid’s death in 1974, Mrs Sonia Pottinger took over and Errol Brown became the senior man in the studio. He dubbed up the old rocksteady and early reggae masterpieces, of which results can be found on three dub albums namely “Treasure Isle Dub Vols 1 & 2” and “Pleasure Dub”.

Errol Brown not only was a recording and mixing engineer, he was also a producer. Together with B.B. Seaton, he produced the latter’s albums “Colour Is Not The Answer” (Jama Music, 1976) and “I’m Aware Of Love” (Roots International, 1979), both recorded and mixed at Treasure Isle studio. Dub versions of tracks from these albums, especially from “I’m Aware Of Love”, form the core of this “Orthodox Dub” album, which was never officially released although a few clandestine copies reputedly did the New York rounds at the time.

Even though Errol Brown isn’t as celebrated as some of his better known peers, this set full of great dub versions testifies of the man’s outstanding skills at the mixing board. No vocal fragments here, solely remixed versions of the riddims. The opener, “Black Forest Rock”, is a true killer – an awesome mix of the riddim that underpins B.B. Seaton’s excellent song entitled “Is Life”. It’s followed by the matching “Gold Toot Style”, a wicked & wild version of B.B. Seaton’s “After All This Time”. Also the title track, “Orthodox Dub” is a captivating mix of a B.B. Seaton tune, in this case “The Morning Sun”.

“Rock A Tone Dub” is the first dub version of this set that doesn’t come from a B.B. Seaton tune. It’s the riddim of Leo Hall’s great 7″ single “People Bawling (Babylon Falling)” from 1977 that gets the Errol Brown dub treatment to full effect. Before the listener is treated to “Roots Rockas”, a wonderful mix of Ken Boothe’s “Who Really Care” – the second non-B.B.Seaton tune – the real nice “Cold Sweat” (B.B. Seaton’s “Walking In The Rain”) comes in.

The last four dub versions, all of them being tough efforts with especially “Dubba Black” and “Africa Roots Style” being outstanding, can be traced back to B.B.Seaton tunes. (“One Thing Leads To Another”, “Lean On Me”, “Somewhere Down The Line” and “Down In The Valley” respectively).

Conclusion A very interesting and totally enjoyable album for fans of roots dub music from the '70s. Not to be missed!