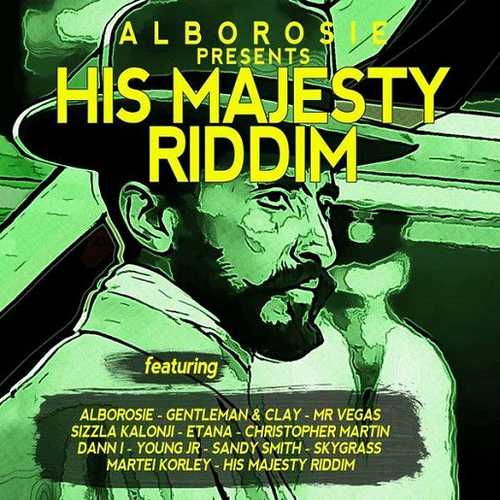 A few relicked versions of the riddim known from the Mikey Dread produced Rod Taylor heavy roots classic “His Imperial Majesty” have emerged since the release of the original single in 1978. However none of them was done in such a stunning way as the most recent one by Mr. Alberto D’Ascola aka Alborosie. Over and over again this versatile Sicily-born reggae star has shown that he’s able to spice up his music with authentic roots vibes of the 1970s in a convincing and exciting way. It not only brought him a strong fan base worldwide, but also respect and appreciation from his peers.

In his role as musician and producer, he has created this juggling project called “Alborosie Presents His Majesty Riddim”, which of course also includes a vocal cut by himself called “Red”, an awesome conscious tune that gets things started in a real big way. BOOM TUNE!!! Although not as strong as the opener, “Dunns River Falls” done by German superstar Gentleman in collaboration with Clay is still worth hearing more than once. Mr. Vegas’ “Unite” is a compelling message tune, in which the reggae dancehall star says we must unite, “no matter if you’re black or white, Palestine and the Israelite, it’s the same blood runs through I&I.” Sizzla contributes a solid cut entitled “No Waste No Time”, while Etana fully shines on her excellent herb tune “Healing Tree”.

Christopher Martin, an artist with quite a number of popular hits under his belt, delivers a brilliant social/environmental commentary. A truly crucial cut with poignant lyrics, beautifully sung by a singer who shows that he’s more than only a crooner who sings for the ladies. Dann-I, the former lead singer of the group Que, isn’t a widely known artist, but with “Put In The Work” he underscores that he’s one to keep an eye on. Junior Reid’s son Yung J.R. caused a stir with his debut album “Start The Movement” and here he also does a good job with the solid “Mr Boss Man”.

Sandy Smith, a criminally underrecorded songstress with a beautiful voice, comes to higher heights with “Crying Out”. The latter is a huge social commentary that keeps you involved throughout. Skygrass, a Jamaican reggae band consisting of Simon Bowden, Rasheed McCallum, Kamardo Blake, Jeremy Ashbourne and John Mark Maitland, makes a decent impression with “Blessed”. Martei Korley, Danish/Ghanaian photographer and creative director of LargeUp.com, attracted notable attention with the 2014 released “Kingston Konfidential EP”. Here he delivers a remarkably good cut entitled “Toxic love”, a tune that really grows on you. At the end the gorgeous “The Majesty Riddim” can be enjoyed to the fullest!