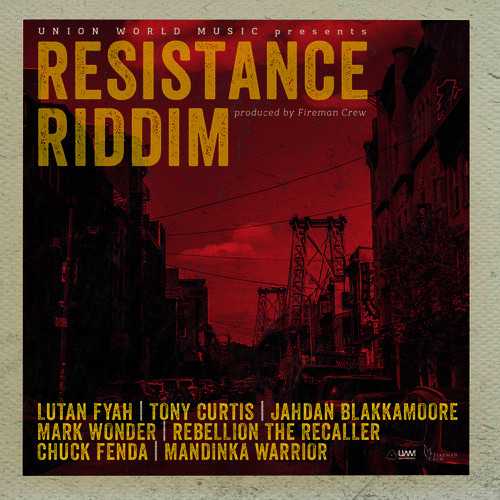 For quite a few years by now, Austria has proven to be fertile ground for producing reggae music of the highest calibre. Probably the best known and most successful production houses are Vienna’s Irievibrations Records and House Of Riddim from St. Pölten. Also the Fireman Crew, a backing band and production team that regularly collaborates with the Union World Music label outta Linz, has slowly but steadily made a name for themselves in recent years with worthwhile production works like Ras MC Bean’s 2014 album “Inlightment” and the juggling sets “Melodical Fyah Riddim” and “Four Seasons Riddim”.

The fruitful collaboration between the Fireman Crew and Union World Music has led to the release of another stellar new compilation of tracks on the absolutely gorgeous “Resistance Riddim”. The latter is a ‘one drop’ riddim that features contributions from a very talented group of artists which is headlined by Lutan Fyah, who gets things started in a big way with “No Assistance”. The latter once again underscores that this artist from Spanish Town, Jamaica is one of reggae music’s finest wordsmiths, which makes that his offerings are always worth hearing more than once. Tony Curtis, a singer in the same vein as Sanchez, hasn’t been very consistent in his output, which prevented him from making a real big international breakthrough. Here he comes up with “Rainy Day”, a surprisingly good conscious tune which fully displays his vocal abilities.

Next comes “You Gonna Lose Her” from renowned soulful vocalist Jahdan Blakkamoore, a beautiful song that deals with affairs from the heart. We’ve pointed it out before… Mark Wonder is a criminally overlooked artist who deserves more appreciation and recognition from the international reggae massive. Listening to his albums and singles it’s hard to imagine why he still isn’t in the forefront of reggae music. The uplifting “Smiling” is another example of how clear and powerful this singer’s sterling voice is. The Gambian born Rebellion The Recaller has been active in Europe for quite some time now. Here he presents the solid “I&I”. Chuck Fenda, who recently put out his fifth studio album “Concrete Jungle”, keeps the vibes high with the awesome “Steppa”. Mandika Warrior rounds off in fine style with the message tune “Who Feels It Knows It”.

Conclusion The "Resistance Riddim" has a really, really nice vibe and is truly worth checking out!