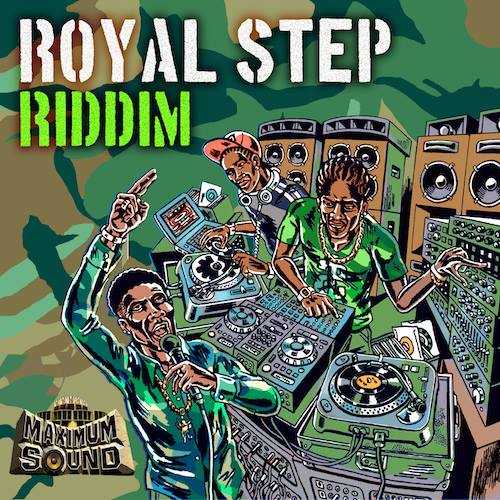 Brand new music from the reputable Maximum Sound label is always something to look forward to as the past couple of decades have learned that you’re constantly treated to a first-rate release. And thus it’s no surprise that this “Royal Step Riddim” compilation with its stellar selection of artists is another great and worthwhile addition to any reggae aficionado’s collection. Apart from Frenchie, who usually does the production work for Maximum Sounds Productions on his own, this juggling project also sees Italo-Jamaican reggae star, producer and multi-instrumentalist Alborosie involved in the production.

As its title more or less suggests the “Royal Step Riddim” is a Steppers riddim with a very modern spin. (Originally Steppers was a more militant development of the Rockers style, dominant in Jamaica during the late 1970s/early 1980s. A facet of Roots Reggae that has never gone out of fashion with groups of fans in the UK and some sound systems there.) The “Royal Step Riddim” is a gorgeous powerful backdrop with great horns and awesome vibes. Morgan Heritage’s outstanding message tune “Conscious Revolution” instantly makes clear that this collection takes no prisoners. An impressive opener, which is followed by Alborosie’s anti-war song “Tearful Days”, an excellent effort with big and vast vibes.

Then talented roots singer Samory-I keeps the vibes alive with the entertaining “Ride On”. The Randy Valentine & Exco Levi combination “Protected” is another strong cut, while Ras Demo’s “Step It like A Soldier” is a massive tune and the same goes for Gappy Ranks’ “Taliban”. Anthony B comes up with the solid “Forward To Africa”, a cultural piece dealing with Marcus Garvey’s attempt at mass repatriation to Africa. Probably the most surprising contribution comes from Augustus Pablo’s son Addis Pablo, who delivers a melodica version his legendary father would have been proud of. Rohan Dwyers’ dub version rounds off this major captivating juggling project.

Conclusion Frenchie's Maximum Sound Productions has come up with many big riddims and this is another one!