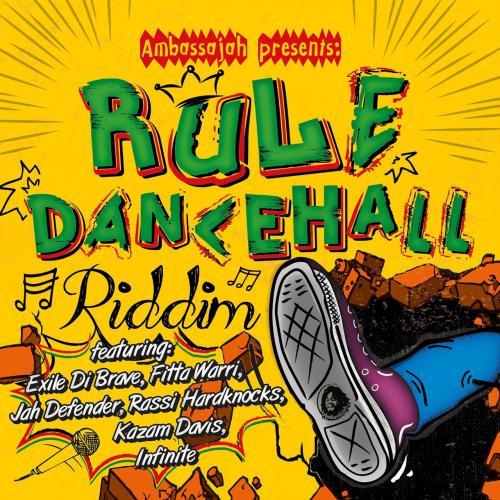 Amabassajah Records is an Austrian based company who surprised us in 2014 with their ‘one riddim’ set caled “Ease Off Riddim”, featuring top tracks by Joseph Cotton, Fitta Warri and Exile di Brave. Their current release is an outstanding riddim set across Bunny Wailer’s tune “Rule Dancehall”, his bubbling answer to the dancehall explosion in the ’80s.

The album brings us 6 vocal tracks and closes with the instrumental lick of the riddim. Opening track comes from Exile Di Brave aka Clayton Johnson, an authentic talent from Portmore JA who belongs to the new breed of roots artists. Although he started out doing hip-hop music, he soon switched to reggae music. He has two solid albums under his belt and here he makes no mistake with his mesmeric roots song “Learn And Teach”. Fitta Warri is a cultural deejay who resides in Germany and has delivered excellent ‘fyah bun’ tunes. “Purify The Dancehall… keep the dancehall clean” is his message in the standout powerful song “Dirty Dancehall”. Infinite aka Roger Thomas handles music from hip hop, world music and reggae. He’s a talented writer and his singjay style suites the riddim perfectly, check out his tune “Early Bird” and you know what we mean.

From Trinidad comes Ricardo Mills aka Jah Defender. As Jah Fyah he entered the reggae stage in 2004. His style reminds us of Capleton, and his tune “More Fire” hits you in a good fashion. Just like Infinite, Kazam Davis is part of the new wave of conscious young Reggae artists who attracted notable attention in recent years. He’s a humble Rastafarian hailing from the Twelve Tribes of Israel. With his blazing roots tune “Many Sons” he demonstrates his talents to the max! Veteran Rashorne Foster aka Rassi Hardknocks was born and raised within the rasta organization of The Twelve Tribes Of Israel. His rasta anthem “We And We” lacks the power of the other tunes, but convinces on the lyrical side. Nice shot!