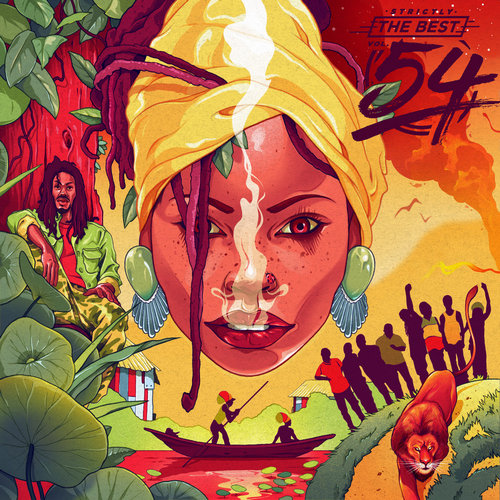 Every year, just in time for the festive season, VP Records releases their “Strictly The Best” albums, two volumes, since they started this longest running reggae compilation in the business 25 years ago. With the exception of one or two years, separately releasing a dancehall and roots/lovers editions each on one disc with most likely a bonus disc. Over the last couple of years we got accustomed to the even numbered STBs being the roots/lovers edition of this “year in reggae” series and thus #54 is that version, accompanied by a bonus disc that will introduce those new lovers of reggae to some truly classic rocksteady, roots, lovers and modern roots singers and vocal harmony groups.

The album kicks off with singjay turned singer here Mr. Vegas’ “Identify My Love” for Riva Nile Productions, followed by a string of tunes showcasing which exceptional talents have risen to the top in Jamaica (more than one of them through the popular Jamaican singing competition Digicel Rising Stars) in the last decade, with the boom tunes “Lovesick” by Romain Virgo, Dalton Harris'”Unfaithful Chronicles”, Ikaya’s “Stuck In The Middle”, Tarrus Riley’s “Cool Me Down” and Christopher Martin’s awesome “Take Me Back”.

Squeezed in between is the completely unnecessary inclusion of Magic!, the Canadian version of Dr. Alban / Ace of Base whose tune is saved from complete disgrace by the Sean Paul feature. Also not contributing their strongest efforts are Sizzla & Jah Cure with “Bad Mind” over the strong “Back Yard” riddim that deserved a better vocal treatment, Alborosie whose “Strolling” isn’t saved from another tune that sounds like all his previous releases by Protoje and the overrated band Raging Fyah with “Get Up”.

But just before this makes you wonder if all strong selections have been included at the start of the disc, Morgan Heritage deliver the fabulous “Natty Bald Head”, before Sanchez delivers the equally impressive “Trap Set” and Freddie McGregor updates U Brown’s “Weather Balloon” riddim for his magnificent “Calling”. I’ve heard better reggae versions already than this version of Adele’s “Hello” by Conkarah & Rosie Delmah from the Solomon Islands, though it’s still a nice cover. Somehow I’m not able to share the enthusiasm that surrounds Jah9’s (recent) releases either, despite it’s great lyrics (addressing child molest) and riddim “Unafraid” it’s her voice / delivery that I don’t feel.

All in all, Strictly The Best, the singers volumes, have had a better killer-filler ratio than the 2016 edition, though I would still recommend it. For all new into reggae, it’s worth buying for the bonus disc alone, a selection that truly is all-killer-no-filler by true legends from rocksteady, through roots and lovers to modern roots. Showcasing what happened in reggae in 2016, “Strictly The Best Vol. 54 surely deserves to be listened to, but the skip-button should not be forgotten while doing so. The bonus disc is worth listening to every second of it over and over again!