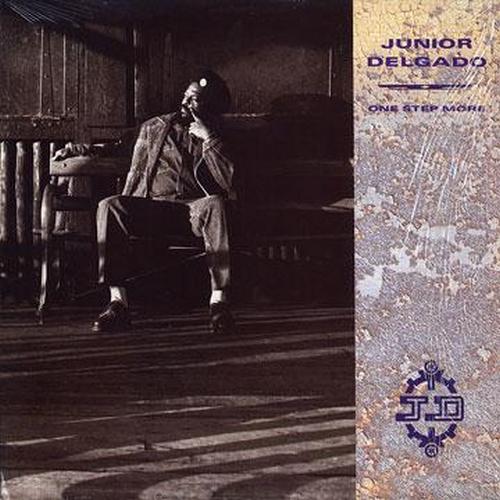 Oscar Hibbert (1958-2005), also known as “Jux” or by his artist name Junior Delgado (Delgado is Spanish for “slim”), had an interesting history in reggae music. Born in 1958, he started in the early 1970s Roots period as singer – under the moniker Junior Hibbert – as still a teenager in the band Time Unlimited, a band taken under the wings of producer Lee Perry. This resulted in the release of the strong single “Reaction” in 1973, that became a hit in Jamaica. Since then, Delgado, first at part of Time Unlimited, recorded for different producers, as common for Jamaican artists. Singles released after “Reaction” by Time Unlimited became no hit (or “went nowhere” as formulated in Jamaica). Probably out of irritation with this, Hibbert started going solo in 1975, then also changing his moniker to Junior Delgado.

Since then it took some years before Junior Delgado had hits in Jamaica. These came especially after moving to Dennis Brown’s DEB label, resulting in hits like “Tichen” and “Famine” in the late 1970s. In the 1980s he released some great songs (like “Sons of Slaves”, recorded with Lee Perry) that became hits or at least popular among reggae fans, internationally, such as in Britain, where Delgado had quite a fan base.

His 1980s songs (like also “Fort Augustus”) still had the “raw”, Rootsy feel of Delgado’s 1970s work. His vocals are (or, sadly, “were”: he died in 2005 at the age of 46) in fact quite unique, and kind of “gruff” (or “harsh” as some describe it). On the one hand such “gruffer” voices seem to follow a specific Jamaican reggae vocal current, going back to earlier deejays like Prince Fari, Prince Jazzbo, followed later by Burro Banton, and still later by artists like Capleton and Buju Banton. On the other hand, however, I think Delgado’s (semi-)gruff voice has also unique qualities and is relatively flexible and certainly “soulful”, often making songs emotionally intense and varied.

Musical and technological changes in Jamaican reggae were notable in later works of Junior Delgado, notably the more “digital” Augustus Pablo-produced “Raggamuffin Year” album of 1986, which for me personally – I must admit – took some getting used to, but it had strong songs, and a catchy intenseness related to Delgado’s voice. “Catchy intenseness” is I think a good way to describe Delgado’s better songs.

This album, “One Step More”, from 1988, also produced by Augustus Pablo, could have had the same “digital” and Dancehall vibe of the 1986 album “Raggamuffin Year”, but it has this “feel” overall less. Sure, it sounds quite “modern” and “digital” (1988-like), yet also has a stronger, organic and Rootsy “live band” feel, though on some songs more than on others. This relates also to a different production, mixing choices and such, being recorded in both the Tuff Gong and Channel 1 studios. An interesting difference, and a good sound.

Crucially, this album has several great, strong Rootsy chunes, with the same “catchy intenseness” as some of Delgado’s biggest, earlier hits (like “Tichen”, “Fort Augustus”, and “Sons Of Slaves”). The opener “What Am I Doing Here?” is very catchy and appealing, drawing you in immediately. The percussive “Hanging Tree” is equally strong, and I think almost a classic, though seeming a bit “harsh” or direct (also lyrically: “bring Botha to the hanging tree…”). The catchy melodic lines, along with Delgado’s powerful yet soulful voice make that “Hanging Tree”, and also “Forward Revolution” definitely belong to the better songs; not just on this album, but arguably even of Delgado’s entire oeuvre. Also the more subtle “Riot In A Juvenile Prison” is good, with a tasteful, “hypnotic’ synth riff, and among the highpoints on this album. “King James” – having a ska-influenced riddim – is a bit more simple, but also quite good.

I would therefore argue that 5 of the 10 songs on this album are good or great. The other 5 songs show other influences – even some mainstream ones. “One Day” has a Dancehall-feel (a bit similar to some Cocoa Tea songs, but with of course Delgado’s much gruffer vocals). This song is okay, but not too impressive, maybe because it is kept too simple. The title track has a “poppy” soul (or simple dancehall) feel, that is bearable and somewhat catchy, but is furthermore not very powerful. Even more poppy and soul-like is “Night Patrol”, almost absurdly poppy sounding, actually. It fails to convince fully, though it shows Delgado’s vocal flexibility, beyond mere “gruffness”. This song is however perhaps too simple to be catchy (it is a thin line…). In my opinion, Delgado’s love songs (which “Night Patrol” also is) tend(ed) to have differing quality, less consistently good than his more (lyrically) “cultural” songs (though his 1979 “Love Thickles Like Magic” is very nice and worth to check out).

Slightly better and more varied than “Night Patrol” on this album are “Love Will Bring A Sunshine Day” and the simple-yet-catchy “Hey Good Looking”, though the latter maybe a bit too mainstream (reminding a bit of Aswad’s crossover “Don’t Turn Around” period), but with an interesting “edge” added through Delgado’s characteristically intense, semi-gruff vocals.

Not all songs on this album are thus great, in my opinion, but certainly 5 out of the 10 songs can be called “great” or “big chunes”, that reggae fans simply should know. Many may know “Hanging Tree” (also released as single) or “Forward Revolution”, but there are as said a few more great or even outstanding songs on this 1988 album. Also the 5 songs that impressed me personally less, have nonetheless mostly a lively, catchy vibe, making them not “bad” per se, though perhaps a bit too simple.

It makes that, in balance, this is a relatively good album. Though released in the late 1980s, it mostly has a Rootsy, organic (“live band”) feel, that I think many Junior Delgado as well as general Roots Reggae fans will appreciate, also the more “purist” ones. The latter might only have an issue with some “poppy” influences on some songs on this album.

Conclusion "One More Step" is a relatively good album.