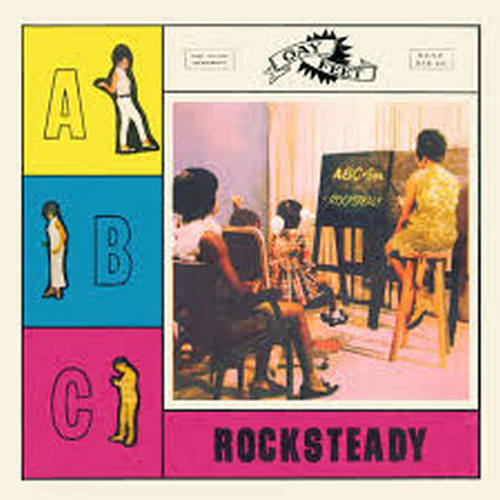 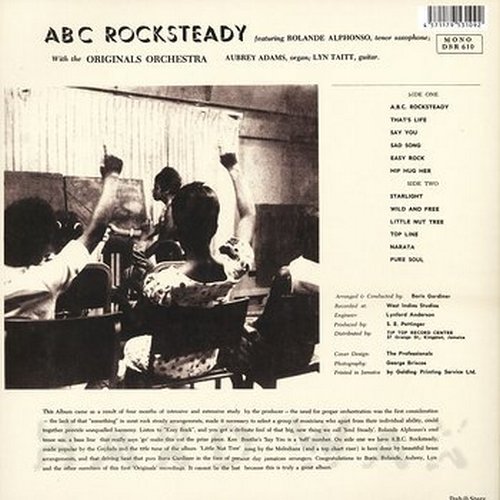 Mrs. Sonia Pottinger is one of Jamaica’s reggae pioneers. She was the first female Jamaican record producer, running her Gay Feet and High Note labels out of her Tip-Top Record shop in Orange Street, Kingston. After some minor hits during the ska period she broke through in the rocksteady era with gigantic hits from The Melodians, The Gaylads, Ken Boothe, Stranger & Patsy and Delano Stewart. In the seventies she delivered excellent productions by Culture, Marcia Griffiths, Justin Hinds, Bob Andy and Big Youth. In 1985 she left the business. Sonia Pottinger died at her home in Kingston on 3 November 2010.

In 1968 she released an instrumental album by Roland Alphonso, “ABC Rocksteady”. The original liner notes reveal the motivation behind the making of this album: “It came about as a result of four months of intensive and extensive study by the producer – the need for proper orchestration was the first consideration – the lack of that “something” in most rocksteady arrangements, made it necessary to select a group of musicians who apart from their individual ability, could together provide unequalled harmony.” The album was known as “Roland Alphonso With The Originals Orchestra – ABC Rocksteady” and appeared on the Gay Feet label in Jamaica, in the UK it was issued by High Note Records with a different sleeve. The Original Orchestra were Aubrey Adams on organ and Lynn Tait on guitar. Bass player Boris Gardiner arranged and conducted the project at West Indies Studios with Lynford Anderson aka Andy Capp as engineer.

Roland Alphonso aka “The Chief Musician” (12 January 1931 – 20 November 1998) was a Jamaican tenor saxophonist, and one of the founding members of the Skatalites. Born in Havana, Cuba, Alphonso came to Jamaica at the age of two with his Jamaican mother, and started to learn saxophone at the Stony Hill Industrial School. In 1948 he left school to join Eric Deans’ orchestra. In 1956 he first recorded for Clement “Coxsone” Dodd, although these early recordings were lost before they were mastered. He became a regular member of the in-house band of session musicians for producers Clement Dodd and Duke Reid. He also acted as arranger at many of Dodd’s recording sessions.

By 1960, he was recording for many producers on the island and he took part in the creation of The Studio One Orchestra, the first session band at Dodd’s newly opened recording studio. This band soon adopted the name of The Skatalites. When the Skatalites disbanded by August 1965, Alphonso formed the Soul Brothers (with Johnny “Dizzy” Moore, and Jackie Mittoo) to become The Soul Vendors in 1967. During the ’70s, ’80s, and ’90s, he kept on playing on numerous records coming out of Jamaican studios, especially for Bunny Lee. He was awarded Officer of the Order of Distinction by the Jamaican government in 1977, and started to tour more often in the US. He took part in the reformation of the Skatalites in 1983, with whom he toured and recorded constantly until he suffered a burst blood vessel in his head during a show at the Key Club in Hollywood. He died on 20 November 1998 at Cedars-Sinai Medical Center in Los Angeles.

The album brings us instrumental versions of songs made popular by artists such as Ken Boothe, Delano Stewart, The Gaylads, The Melodians and Stranger & Patsy. The original trio the Gaylads was formed in 1963 by vocalists BB Seaton, Delano Stewart and Maurice Roberts, and became one of the top vocal groups between 1963 and 1973. With Delano Stewart leaving to trio late 1968 to mount a solo career, and then BB Seaton who began his solo career in 1973, there were several line-up changes throughout the Gaylads’ history. The album begins with “ABC Rocksteady”, an enormous hit for The Gaylads in 1968. Roland Alphonso’s tenor sax replaces the lead vocals perfectly! Gaylads’ member Delano Stewart scored with “That’s Life”. The original 7″ single was backed with “Tell Me Baby”, the vocal track of the here included track “Wild & Free”, both wicked instrumental licks!

“Pure Soul” is a jazzy instrumental (“That’s Life” riddim) performed by Lennie Hibbert (the famed vibraphone virtuoso), Lynn Tait and Count Ossie on drums. In 1965 Brent Dowe, Tony Brevette and Trevor McNaughton (later replaced by Robert Coggle) assembled as The Melodians. The group enjoyed a string of hits for Duke Reid and in 1968 they scored with “Little Nut Tree” and the immortal “Swing and Dine” for Sonia Pottinger. Both tunes are included here. “Easy Rock” is a magnificent mellow take on “Swing And Dine”, also known as “Swinging Feast”. “Little Nut Tree” is not an instrumental take, but a vocal cut from an unknown female vocalist! Weird! “Narata” takes on a familiar rocksteady riddim, but we’re not able to trace it down. The same goes for the excellent tune “Top Line”.

Ken Boothe, a singer who is known and loved for his emotive and soulful voice, was born in 1946, Kingston, Jamaica. He recorded fine sides for Coxsone Dodd and in 1968 he scored with “Say You” and “Lady With A Starlight” (in fact Nat King Cole’s “Hazy Lazy Crazy Days Of Summer”) for Sonia Pottinger. He topped the UK pop charts in 1974 with “Everything I Own”. “Say You” has vocal snippets by an unknown female vocalist while Roland Alphonso blows his horn with ease and style. “Starlight” is a horns/organ dominated instrumental take. “Sad Song” is the instrumental version of Queen Patsy’s (Millicent Todd) “It’s So Hard Without You”. The song was one of her biggest hits and the instrumental lick is powered by Aubrey Adams’ organ. The version of “Hip Hug Her”, a Booker T & The MG’s funky hit from 1967 is definitely no rocksteady!