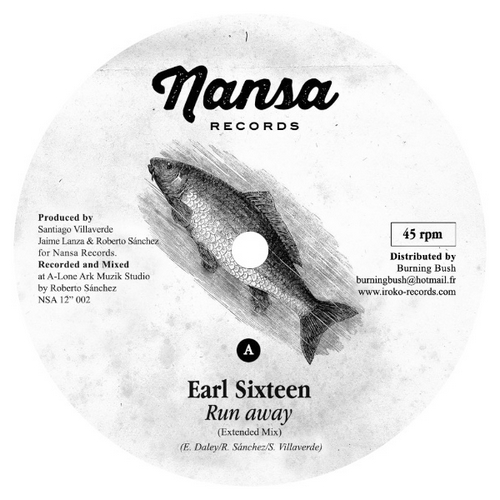 Nansa Records from Cantabria in northern Spain was founded by producers Santiago Villaverde and Jaime Lanza. As producer and musician Roberto Sánchez and his A-Lone Ark Muzik studio is also located in that area, a collaboration between these three men makes much sense, especially as they share the commitment of producing roots reggae and dub music that harks back to the heyday of Jamaican roots reggae and dub in the latter half of the 1970s.

In 2013 the first release from Nansa Records saw the light of day, a 10″ vinyl single featuring Linval Thompson’s “Children Of Israel”, Papa Cruz’s “Crisis” and Ranking Forrest’s “Crisis Time”. After a long hiatus Nansa Records kicks off 2017 with two 12″ records, while several others featuring artists such as The Viceroys and Ricky Grant are in the can. Besides that there will also be the release of “Creation” and “Creation Dub” and the first LP from Santiago Villaverde as a vocalist, under the name of Shanty Yalah.

Don’t know if Nansa Records founders Santiago Villaverde and Jaime Lanza, just like so many reggae connoiseurs and fans of good roots reggae music, were impressed by the Roberto Sánchez produced Earl 16 showcase album “Natty Farming”, but most likely they were because they’ve brought the producer and the venerable artist back together again for the recording of a tune featured on the label’s second 12″ vinyl release. Whenever Roberto Sánchez or Earl 16 do something it is respected and almost always class output and “Run Away” is no exception. The riddim sounds superb with Don Fe’s flute play adding a real nice touch. After more than 40 years in the business, it’s still a joy to listen to Earl 16’s wonderful voice. “Run Away” is a great reality tune, in which Earl 16 refers to current problems caused by the crumbling Babylon system.

Marc Ibarz aka Marcus I from Santander delivers the next worthwhile cut for the riddim entitled “Alliance”. It’s a tune with a positive message and social commitment, and thus actually the perfect follow up to Earl 16’s offering. The inclusion of the “Riddim Version” by Lone Ark Riddim Force, the resident band of the A-Lone Ark studio, is the icing on the cake. Play this track real loud and full enjoyment is guaranteed!!

Conclusion After Nansa Records' first 12" release, featuring Little Roy, this is another platter well worth adding to any roots reggae collection. Only 500 copies pressed, so get yourself a copy before they are gone!