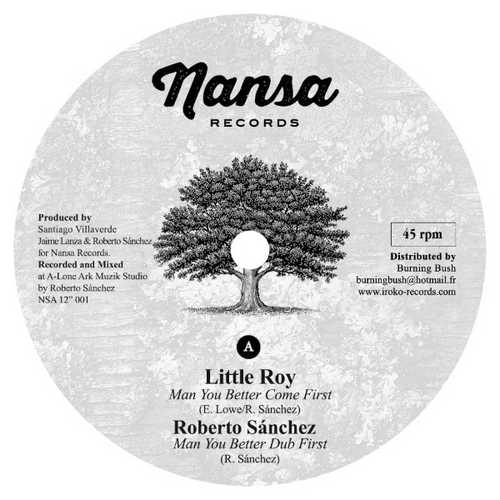 Nansa Records from Cantabria in northern Spain was founded by producers Santiago Villaverde and Jaime Lanza. As producer and musician Roberto Sánchez and his A-Lone Ark Muzik studio is also located in that area, a collaboration between these three men makes much sense, especially as they share the commitment of producing roots reggae and dub music that harks back to the heyday of Jamaican roots reggae and dub in the latter half of the 1970s.

In 2013 the first release from Nansa Records saw the light of day, a 10″ vinyl single featuring Linval Thompson’s “Children Of Israel”, Papa Cruz’s “Crisis” and Ranking Forrest’s “Crisis Time”. After a long hiatus Nansa Records kicks off 2017 with two 12″ records, while several others featuring artists such as The Viceroys and Ricky Grant are in the can. Besides that there will also be the release of “Creation” and “Creation Dub” and the first LP from Santiago Villaverde as a vocalist, under the name of Shanty Yalah.

Being not a very prolific artist, it’s always something to look forward to when Little Roy comes up with a new offering. After his stint with Prince Fatty, which led to the 2011 album “Battle For Seattle” (featuring 10 Reggae versions of songs from Nirvana), it’s really good to have him doing what he can do best, namely deliver a proper roots tune. Underpinned by a superb brand new riddim built by the amazing Lone Ark Riddim Force, Little Roy’s highly respected, distinctive calm vocal style is in full control. It makes “Man You Better Come First” a real treat for his long time fans!

The next cut for the riddim, “Womankind”, comes from Virginia Rivera, a composer and vocalist who has explored several styles of ‘black music’ including neo soul, hip hop, reggae and gospel. This songstress has a beautiful angelic voice and her solid message tune is something men and women can relate to. Both sides feature Roberto Sánchez at the controls, nicely dubbing it up in “Man You Better Dub First” and sticking to an instrumental version with “Riddim Mix”.

Conclusion If you're a vinyl head and fulljoyed Robero Sánchez produced albums from Earl Zero, Milton Henry, The Viceroys, Earl 16, and Noel Ellis, this one shouldn't be overlooked either. Only 500 copies pressed, so get yourself a copy before they are gone!