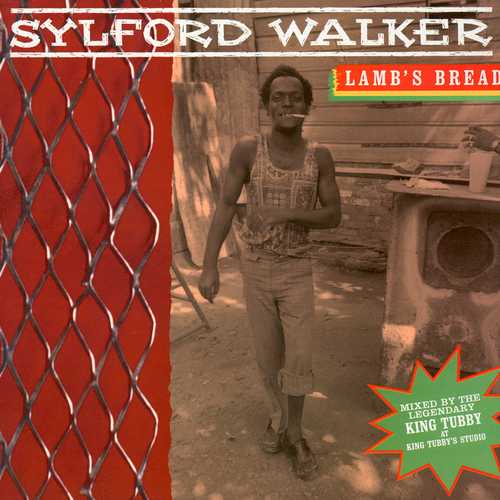 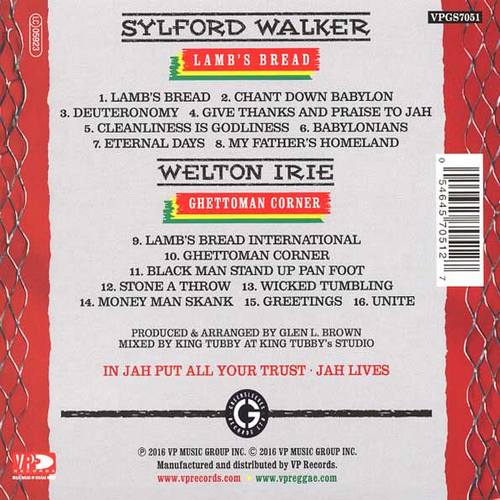 Greensleeves’ latest re-release is an album (2 albums on 1 cd) shared between roots singer Sylford Walker and deejay Welton Irie inna wicked production by Glen Brown. Although most of these tracks have been available on prior collections (most of them being out of stock) from labels like Blood & Fire, Greensleeves Records, Shanachie and the producer’s own Pantomime, the album “Lamb’s Bread” is indispensable as Sylford Walker’s “Lamb’s Bread” and Welton Irie’s “Ghettoman Corner” are no longer obtainable.

Glen Brown emerged in the sixties as a vocalist with Sonny Bradshaw’s jazz group and made a couple of rocksteady tunes in 1966 and 1967 with Lloyd Robinson. In 1969 he began producing records but his first big hit came on his own Pantomine label with the melodica duet “Merry Up” by the God Sons, being Glen Brown and Joe White. He established himself as a producer with a run of hits and Glen Brown, nicknamed the “rhythm master”, became a sort of cult figure, not only due to his ability to create highly original, supremely tough riddims, but also because his tunes were often pressed in tiny quantities with labels re-used from previous releases, or occasionally on blank labels. Another interesting aspect regarding the Glen Brown produced material is the fact that his productions were mixed by King Tubby. Furthermore he was the first to credit Tubby as an artist in his own right on the 1972 release “Tubby’s At The Controls”.

“Lamb’s Bread” brings together the work of two artists with whom Glen Brown worked in the second half of the seventies. Sylford Walker – an archetypical roots singer in the Burning Spear mould – had begun his recording career in 1975 with Joe Gibbs when he recorded the sublime “Burn Babylon” and “Jah Golden Pen”. Subsequently he recorded “Bad Bad Bad” for Clive Hunt. During 1977-1978 Sylford Walker teamed up with Glen Brown and worked on several outstanding roots songs. An album was planned but Glen’s continual flow problems prevented the album’s release. It lasted until 1988 when Greensleeves released the album and it instantly became a critical success. At the same time, the undervalued Welton Irie (real name Welton Dobson) – Lone Ranger’s former spar and mainstay of the celebrated Gemini sound system – began voicing versions of some of Sylford’s songs. All the riddims he voiced had been used for previous productions on Glen Brown’s labels. Several of the Sylford Walker pieces were released as singles on the South East Music label. In 1977 the 12″ by Glen Brown and Welton Irie, “Lambs Bread Callie Man”/”Lambs Bread International”, hit the streets and that same year the “Ghettoman Corner” set was released on the Pantomine label. He also established a wicked reputation alongside deejay Johnny Ringo and released several albums in the first half of the eighties.

This album, phat packed with awesome roots anthems, is without doubt rightfully regarded as one of the major holy relics of reggae. The remastered package (mixed by King Tubby at King Tubby’s) with Welton Irie’s original 1977 deejay LP gives the listener a perfect overview of Glen Brown’s production qualities. First there’s his classic roots riddim “Slaving”, used for Sylford’s “Chant Down Babylon” and Welton’s deejay cut “Ghettoman Corner” but Glen Brown’s melodica cut “No More Slavery” isn’t included. The immortal “Dirty Harry” riddim is the backdrop for Sylford’s “Give Thanks And Praise To Jah” while “Lamb’s Bread” and “Lamb’s Bread International” ride the “Save Our Nation” riddim. Definitely superb are “Cleanliness Is Godliness” and “Babylonians” – both delivered over the “Love On The Scene” riddim although with a different mix. Welton’s lick pon the riddim is “Stone A Throw”. Inna extended mix comes “Deuteronomy”, a powerful steppers cut of “Death In The Arena” with a crashing King Tubby dub. The entertaining toasting version of Welton Irie is called “Black Man Get Up Tan Up Pon Foot”. The hypnotizing “Eternal Days” is his version of Glen Brown’s “Forward The Good”.