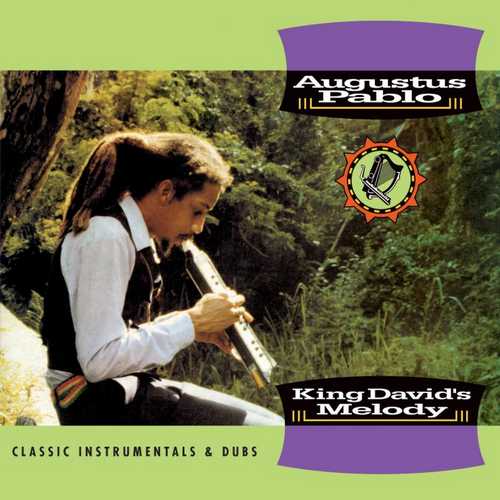 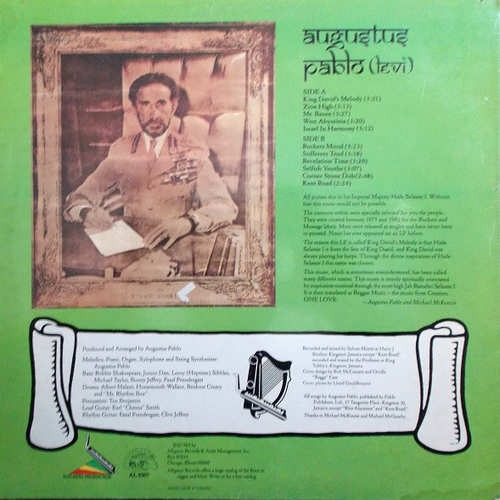 “We play music by feeling it. We call it the Far East sound. Cause we play in minor chords. When you play those chords it’s like a story without words” (Augustus Pablo).

“The reason this LP is called “King David’s Melody” is that Haile Selassie I is from the line of King David, and King David was always playing his harps. Through the divine inspiration of Haile Selassie I this name is chosen” (Augustus Pablo).

The late great Augustus Pablo will be remembered as the somewhat frail-looking rastaman, who made an amazing contribution to roots reggae both as a melodica/keyboards player and as a producer with an immediately recognizable style. When he passed away on May 18th, 1999 the reggae community was shocked. Born 1954, St. Andrew, Jamaica, to a wealthy middle-class family, Horace Swaby aka Augustus Pablo, often in ill health, not only was responsible for putting the melodica on the musical map, thus creating an highly individual reggae style, but he also played a key role in the musical history of Jamaica. In his role as musician and producer he has helped to shape reggae so much that his music can easily be described as “The Sound Of The Seventies”.

The legend began in 1969 when Herman Chin-Loy, who had a much-deserved reputation for experimenting with new sounds, asked the slightly-built teenager if he could play the melodica he was holding. They teamed up for a recording session with a tune entitled “Iggy Iggy”. Herman Chin-Loy gave the youth his recording debut and more significantly, a new name – Augustus Pablo -. At the age of eighteen Augustus Pablo had his first hit at Randy’s for Clive Chin’s “Impact” imprint with “Java” and he soon established himself through his releases on his own “Hot Stuff” and legendary “Rockers” label. The way in which the riddims were mixed was also important to Pablo. In common with Vivian Jackson, Lee Perry, Bunny Lee and several others he employed King Tubby to mix his productions. It actually led to the release of an album that confirmed and spread both men’s reputation : the 1976 released dub set “King Tubby Meets The Rockers Uptown”. Working as a producer he often teamed up with a young Jacob Miller, Hugh Mundell, Junior Delgado, but also others such as the Heptones, Locksley Castell, Ricky Grant, Delroy Williams and Norris Reid have also met with some fame on Pablo’s unique riddims.

In 1978 he released the “East Of River Nile” set, Pablo’s first self-produced instrumental (as opposed to dub) set. At the end of the 80s reggae connoisseurs Chris Lane and Dave Hendley compiled the album ‘Original Rockers’, a compilation of singles, all recorded in the first half of the 70s. Further albums, singles and productions followed. In 1983 he gave us “King David’s Melody”, an 11 track instrumental set, now re-issued by VP Records inna extended form. The re-issue gathers tracks from the period 1975 to 1982, recorded for Pablo’s own “Rockers” and “Message” labels, most of them released as singles. The album — mixed by Sylvan Morris at Harry J. Studio, except for the tracks West Abyssinia and Kent Road — contains the classical riddims for which Pablo was so revered, but also points to future works as it also features more computerised sounds, which began to emanate from Kingston studios.

This re-issue comes with no less than 9 extra tracks not on the original version of the album. Opening tune is Pablo’s lick of Junior Delgado’s “Away With Your Fussing & Fighting”, truly one of Pablo’s better efforts of the time. “Israel Dub” is a dub version of “Israel In Harmony” which appeared on the extended 12″ version of that song. The riddim is also used on Earl Sixteen’s tune “Changing World”. “Freedom Step” is an instrumental on the same riddim as “Corner Stone Dub” and appeared only on the flipside of the Jamaican single of the same name. “Jah Strength Ital Step” is a brilliant dub reworking of “Mr. Bassie”, which is a tribute the another reggae legend, Leroy Sibbles. “Zion High” and its dub version “Zion Dub” uses the backdrop of the hit tune “Riding On A High & Windy Day” by the Paragons. “West Abyssinia” gives us a splendid interpretation of Jackie Mittoo’s “Free Soul”. The riddim returns later on the album inna mellow dub stylee. Horace Andy’s “Problems” form the basis for “Kent Road”, a riddim build by Herman Chin-Loy. A nice booklet with liner notes by Noel Hawks completes this re-issue.