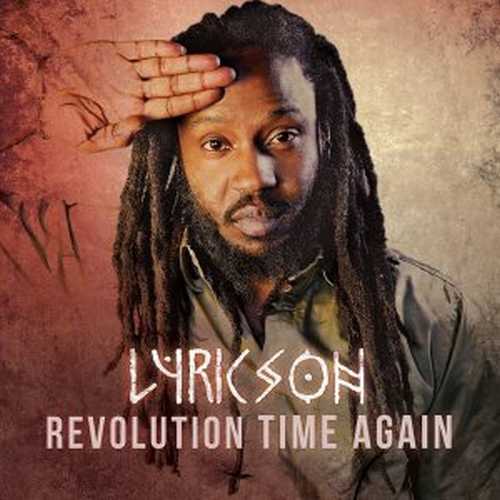 In 2004 a then unknown artist going by the tuneful name Lyricson made his appearance in the reggae arena like a bolt out of the blue with his impressive debut album “Born 2 Go High”, put out by Special Delivery Music outta Paris, France. Since then Guinean born Lyricson has come up with four full length albums including “Keep The Faith” (2007), “Messages” (2010), “Fearless” (2011), “Love Therapy” (2012).

At the beginning of 2017 France based Undisputed Records – the label known from quality releases such as Treesha’s “Listen”, Million Stylez’s “Revelation Time” and Skarra Mucci’s “Dancehall President” – unleashes Lyricson’s brand spanking new album entitled “Revolution Time Again”. The latter includes thirteen tracks including an “Intro” and “Interlude” plus several guest appearances of which the collaboration with Vaughn Benjamin (now calling himself Akae Beka) surely is the most unexpected one. In particular his first two albums showed that Lyricson has the skills to act either as a singer, singjay or deejay, but here he mostly sings, which is a good thing as the man has a great voice. Besides that Lyricson is a very strong writer, hence his name, which makes it interesting to listen to his lyrics.

One of the finest tracks on Lyricson’s brand new album is its opener (following the “Intro”) and title track “Revolution Time Again”. The latter done in collaboration with Vaugn Benjamin, whose inimitable voice and thought provoking lyrics give it an extra dimension, is absolutely fantastic. The tempo goes up on the fiery “Burning”, a perfect example of Lyricson’s fascinating delivery as he seemingly effortless switches between singing and singjaying (in a style reminiscent of an artist like Turbulence). Despite having delivered some noteworthy singles and a well received album Aaron Silk’s never managed to reach the same status in reggae music like his legendary brother. A real pity as his possibilities for greatness is unquestionable. “No Trust In Them” gives a glimpse of what Aaron Silk is capable of, even though he has to share credits with Lyricson. This superb tune once more proves that Lyricson’s style blends nicely with another.

Both “Jah Never Failed I Yet”, a tune giving thanks and praises to His Imperial Majesty, and the captivating serious message tune “Whatcha Gonna Do” are outstanding and thus worth hearing over and over again. It’s followed by the soulful sung “Music”, which even after having played more than once doesn’t cause much excitement as it is entirely a mediocre song. Luckily the collaboration with Ilements called “Babylon Face” turns out to be another very good tune here. “If We Try” is a beautiful uplifting tune with Lyricson singing over a piano and percussion accompaniment. Next comes the big and bad “Tell Me Why”… what a wicked combination… three the hard way!!! A huge tune that goes on repeat. Totally different vibes are experienced when the powerful “Bounce Back” leaps off the speakers. Things are rounded off in fine style with the R&B tingled “Open Up Your Eyes”, a message tune done in collaboration with talented Guinean vocalist Soul Bang’s.

Conclusion Without any doubt Lyricson's best album to date!