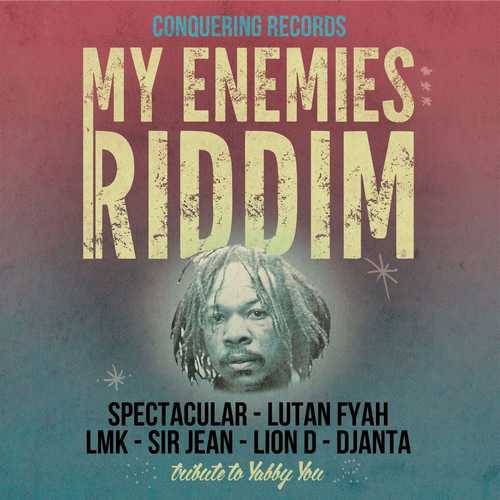 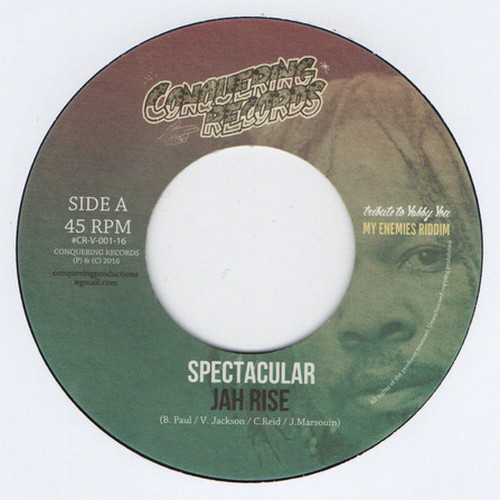 Title: Various – My Enemies Riddim (Tribute To Yabby You)

After touring all around France for 6 years, the two-man crew of Conquering Sound have founded their own record label aptly named Conquering Records. Their very first project, “My Enemies Riddim”, comes just after the release of the strictly dubplates “Gun Salute Vol. 1” mixtape, which featured Sir Jean, one of the top underground artists in France (ex-Le Peuple de l’Herbe).

The “My Enemies Riddim”, composed by Green Ben, is a cleverly done recut of Yabby You’s anthem “Deliver Me From My Enemies”. It incorporates a sample of the original and mixes reggae with a bit of hip-hop in fine style. Besides Jamaican singjays Lutan Fyah and Spectacular, the line up also features artists from Italy (Lion D), Sir Jean (Senegal) and France (LMK and Djanta). In the past decade Spectacular has been closely working with Irie Ites from Le Mans, France. Their fruitful collaboraton led to the release of some outstanding tunes and made him a well known name in France and other European countries. And thus it makes much sense to see him being involved in this project from the producers of Conquering Records as they have close ties with Irie Ites.

“Jah Rise” makes fine usage of Spectacular’s aggressive style, which strongly reminds of an artist like Capleton. It’s a big opener and together with Lutan Fyah’s offering one of the highlights here. Since he emerged on the scene the artist from Spanish Town, Jamaica has become one of reggae music’s finest wordsmiths, once again underscored by “Modern Day Traitors”. Also Lion D, whose 2015 released fourth album “Heartical Soul” created serious waves, comes up with a noteworthy tune entitled “Deh Yah”. Lesser known to a wide audience are Sir Jean, new female sensation LMK and rising talent Djanta. All three artists deliver decent cuts, but in particular worth hearing is the conscious “Some A Dem (Slow Down)” by LMK. a Lyonnais songstress who musically shares many affinities with Soom T.

Conclusion Overall opinion is that Conquering Records makes a real good start with this juggling project.