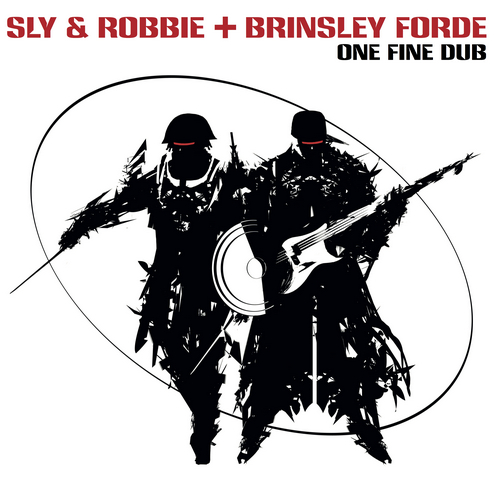 About two years after the release of Sly & Robbie’s amazing dub album “Dubrising”, which featured innovative dubbed up versions of tracks taken from Horace Andy’s “Livin’ It Up” and Chezidek’s “I Grade”, the avid dub head and reggae aficionado will be very pleased with its exciting follow up, “One Fine Dub”.

It’s very unusual, and to our knowledge not seen before, that a dub counterpart of a vocal album has been released even before the vocal album has seen the light of day. And that’s the case here as “One Fine Dub” is the Groucho-mixed dub version of the as of yet unreleased Sly & Robbie + Brinsley Forde album “One Fine Day”. Actually the reason for this is that only recently the mixing of Brinsley Forde’s brand new album was put in the hands of Steven Stanley (considered one of the best audio engineers in Jamaica by many artists and producers), while on the other hand legendary sound wizard Paul “Groucho” Smykle already had finished the dub version. And as one might expect from dubmaster Groucho – the man who has mixed some of the most intense dub works and etched his mark on prime works by Black Uhuru, Sly & Robbie, Ini Kamoze and others – has done a truly great job.

Riddim tracks were recorded at the Anchor Studio in Kingston, Jamaica, with engineer Phatta Pottinger at the knobs. In addition to Sly & Robbie on drum and bass, original tracks feature Dougie Bryan on guitar, Lenky Marsden on keyboards, Sticky Thompson on percussion and Cat Coore on cello, while overdubs were recorded and arranged by Groucho in London and feature Bunny McKenzie on harmonica and Dan Donovan on keyboards. Top notch mastering has been done by Bruno Sourice on all analog tube equipment; the illustrations for the sleeve have been made by Joseph Gloria Chapalys, known for his illustrations on top selling video games; the vinyl LP has been pressed in Germany by Optimal, considered as the world’s best record plant!

The first thing you notice when the first track, “Until Dub”, starts to leap off the speakers is Brinsley Forde’s great vocal before the dubbed up riddim, with a strong emphasize on Sly’s militant drumming, takes over the proceedings. Here, and also on other tracks, layers of synthesizer sounds create a real nice and appealing mood. A great heavyweight dub workout!!! Different mood and vibes come with the strong “Gideon Dub”, with the cool harmonica play being especially noteworthy. Also of interest are the snatches of vocals in the mix as you can hear Brinsley Forde sing lyrics from Shabba Ranks’ “Heart Of A Lion”. Another track that features snatches of vocals with instantly recognizable lyrics is the moody “Creation Dub”. Here Brinsley Forde utilizes lyrics from Burning Spear’s all time classic “Creation Rebel”. Another scorcher featured on this album is “I Know Dub”, with Robbie Shakespeare’s bass playing a prominent role. Hearing Brinsley Forde sing “Girl I’m missing you” indicates that this is a dub version of a love song that will appear on the former Aswad lead singer’s forthcoming “One Fine Day” set. And also “God Knows Dub” and “She’s Gone Away Dub” turn out to be worthwhile dub versions of love songs. The mind blowing “Tribal War Dub” is a superb heavyweight dub workout, while the title track “One Fine Dub” perfectly rounds off this thorougly enjoyable dub set.

Conclusion "One Fine Dub" is heavy as lead and a more than worthy successor of the "Dubrising set". Not to be missed!!!