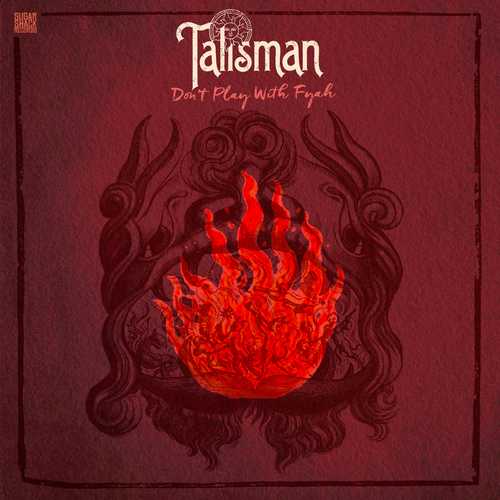 After welcome and well received reissues of Talisman’s 1984 released debut album “Taking The Strain” and its 1990 follow up “Jam Rock” plus the compilation set “Dole Age – The 1981 Reggae Collection” and the two live albums “Glastonbury And Beyond 1980” and “Live Bath 1981” by respected Bristol Archive Records, Talisman made their return in the UK reggae arena on May 27, 2011 with their first live show in decades at The Fleece, Bristol. Two years later, the at the time of their beginnings criminally neglected Talisman came up with “I-Surrection”, their 2013 released third album and first new material since 1990, which in 2014 was followed by its dub counterpart entitled “I-Surrection (Oldwah Deconstruction)”.

Was their “I-Surrection” set already an amazing piece of work, this brand new “Don’t Play With Fyah” album amazes even more. It’s a fantastic collection of tunes with a sound that sparkles from beginning to end. Credits for this has to go to legendary musician, producer, engineer and all round British reggae genius Dennis Bovell, who has surely pulled out all the stops when he did the final mixes. The first actual bit of music to come on the album is candy to the ears of the roots reggae fan who has fond memories of the great roots reggae music from the late ’70s and early ’80s. Musically it are in particular the tight intoxicating basslines, the bubbling key works and the stunning omnipresent full horn section that make this album’s sonic appeal very high. The album opener, “Relijan”, is a roots killer with lyrics that resonate with contemporary relevance as they tell about the huge problems in the world that find their origin in religious beliefs. Also the very compelling “Talkin’ Revolution” is a powerful piece and a real winner on every level.

Completely different vibes are brought in by the cheerful sounding “She Look like Reggae”, a catchy tune that gets stuck in your head. “Don’t Play With Fyah” is the first of three worthwhile tunes that follow next. They share similarities in terms of their messages as they carry warnings, which perhaps are more relevant now than at any time this century. The track that lend the album its title is a gorgeous roots piece, which is followed by the strong “Hear No Evil” and the matching “Racism Never Sleep”. The vocal part of this album comes to an end with the completely different vibed “Wheel And Come Again”, not one of the album’s best offerings but all in all a nice tune across an uptempo riddim. After the last vocal cut it’s time to go into dub territory with Dennis Bovell treating the listener to seven scintillating dub versions. Dub mixes really are this UK dub innovator’s forte, something anyone familiar with the man’s dub records undoubtedly will affirm.

Conclusion Anyone who loves roots & culture should check this brand new Talisman album as it's top grade with great vocals and dub versions too.