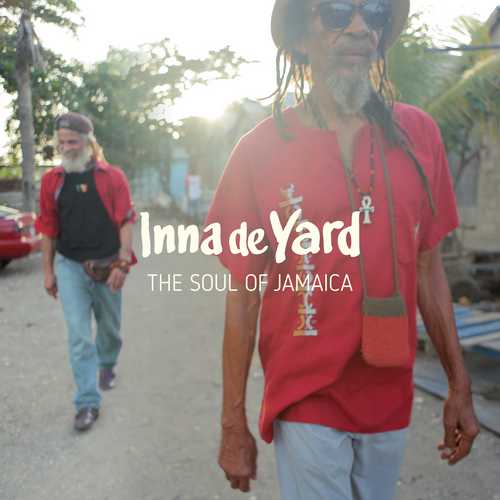 To keep the true tradition of Reggae music and its Foundational integrity in forward representation is a must. Thankfully, collectives brimming with decades of experience and endurance are doing just that. We must recall the Inna De Yard movement. A vision to record timeless music without the constraints of the studio; an open air acoustic vibration focusing primarily around legendary guitarist/ambassador Earl “Chinna” Smith’s yard with Foundation statesman and younger Lions firmly committed to Roots and Culture. Between 2004-2008, France based Makasound released eight timeless “Inna De Yard” albums. Talking about Junior Murvin, Kiddus I, Mighty Diamonds, Linval Thompson, Ras Michael Jr, Cedric Myton and two “Chinna & Idrens” sets. Alas, the label ceased operation in 2011. Well, the minds behind that remarkable label have reformed as Chapter Two Records and Creation will experience the natural flow of lyrics to riddim with “The Soul Of Jamaica”! A remarkable set that captures the absolute essence of King’s Music…

This set was recorded in four days in the musical hotbed of Kingston with no rushed approach; just mutual respect from singers and players and focus on recording songs the way they should be created. One can sense the relaxed approach that was so evident in previous Inna De Yard projects. It’s important to know that even though it’s been years since the last release (“Chinna & Idrens, Vol. 2” -recorded between July 14-19,2008), the sessions have continued in a broad spectrum. An amazing array of singers and players of instruments have gathered for countless sessions. It’s necessary to mention producer Nathan Sabanayagam (Naya Records); who released “Grass Yard Productions Vol.1” (2009). These were timeless sessions at Chinna’s yard that included Bob Andy, Ken Bob, Dizzy Moore, Jahmel, Ken Boothe and served as a tribute to Johnny “Dizzy” Moore. Gladness to hear many artists on “The Soul Of Jamaica” whose work harks back to early Inna De Yard movements. It’s pertinent that these recordings also showcase the Divine talents of younger artistes with limitless talent.

The Viceroys revisit their early ’80s masterpiece, “Love Is The Key”, with ethereal quality. Wesley Tinglin and crew deliver majestically over the nyahbinghi, guitar and piano driven riddim. The open air vibes are felt from the get go. Boom! Mr. Ken Boothe is stunning with his take of “Let The Water Run Dry”. He injects so much soul power into every lyric over the majestic riddim. Six decades in the business and his delivery still captures undivided attention. Lloyd Parks is of that same caliber. He’s still at the helm of We The People Band; his immense vocal catalogue is one for all times. He recalls “Slaving” (one of his finest ’70s anthems) with such heartical and truthful purpose. Accompanied by piano, guitar and percussion, he sings with a voice that is one of the finest to ever come out of Jamaica!

Kush McAnuff is part of one of the most talented families in Reggae music. Consider his father, Winston and his late brother Matthew (who delivered “Be Careful” on an earlier Inna De Yard set) and his brother, Ishmel. On “Back To I Roots”, he carries the electricity of his father, Winston. He flows naturally and proudly over the Zion High riddim accentuated by the late Nambo Robinson. Instant rewinder!! Cedric Myton recorded an Inna De Yard set in 2004 and he is brilliant on his revisit of The Congos’ “Youthman” from 1979. The beautiful riddim with Nambo in place is the platform where Cedric displays his incredible falsetto. He displays a wider vocal range here and it’s evident that all involved were in total unity. A song on par with “Days Chasing Days”; he takes it to highest heights! Var’s “Crime” is amazing. Not well known outside Jamaica (until now), he’s lead singer for Pentateuch Movement. He has a commanding delivery with solid songwriting and complements the acoustic elevations like a true veteran. How pleasant to hear the diversity that abounds.

Kiddus I has been with Inna De Yard since the beginning and recorded the second Inna De Yard album in 2004. He’s at his best on “Jah Power, Jah Glory”. Over beautiful acoustic orchestration, he flows like a mighty river. Reminiscent of his 2014 Dub Store acoustic sessions in Tokyo; he’s truly one of Reggae’s greats. Ken Boothe shows up again with “Artibella”. He has visited his smash hit numerous times but this is the most rustic and organic delivery to date. Such a rich and soulful voice that intertwines with the cool and textured riddim that is inspired by The Most High. After repeated listening, one is transported to this open air recording. Amazing work by all!! Steve Newland is the lead singer for the hugely talented Rootz Underground and it’s a treat to hear him here. “Sign Of The Times” showcases his Marleyesque caliber delivery and his true embrace of conscious Roots music. Lion on the rise, for sure!

Winston “Electric Dread” McAnuff is a true legend and part of the Inna De Yard family for years. With a career starting in the ’60s to innovative Roots projects with Fixi and Bazbaz Orchestra, his Roots intellect is undeniable. He takes “Secret” to highest levels. With angelic backing vox and a thunderable Nyahbinghi driven riddim, he commands the microphone with authority and conviction. An incredible amount of emotion from start to finish. Derajah is one of the most exciting artists around. He’s cut songs with Inna De Yard as Jah Youth and his 2011 “Paris Is Burning” is a true classic. He shines on “Stone” with originality and vision. Pure Rasta riddim that he croons, wails and exalts on with Zion clarity. An artist to check out indeed. Standout selection!! Mr. Parks gives it up on another of his finest ’70s anthems, “Money For Jam”. The original is CLASSIC, but he lays it out to take it a notch higher. A crucial lesson on working hard and not resorting to wicked ways. Nambo Robinson shows up also; elevating the beautiful riddim so nice. The set closes out with Winston “Bo-Pee” Bowen’s “Thanks & Praises”. A legendary guitarist and an integral element of Inna De Yard for years; to hear him sing front and centre is awesome. He has a throaty delivery and exalts absolute praises unto The Most High. Fulljoyment all the way!

(Note: On September 29th, 2017 the bonus edition was released with the following tracks added : Kiddus I – Security In The Streets; Winston McAnuff – Ras Child; Derajah – His Name Is Holy; and The Viceroys – Keep On Moving.)

Conclusion Inna De Yard's "The Soul Of Jamaica" is exactly that. The project captures the Heart, Mind and Soul of real authentic and truly acoustic Jamaican music and history. King's Music? Yes, indeed! This is a piece of absolute beauty, clarity and the reality that the time honored tradition of making music that matters is still intact amid the ever changing musical landscape. Inna De Yard commences a European tour on April 22, 2017 and the collective unity is as evident on stage or yard and house. ESSENTIAL listening. After hearing these tracks, one will feel compelled to seek out the entire Inna De Yard series. Go deh!!