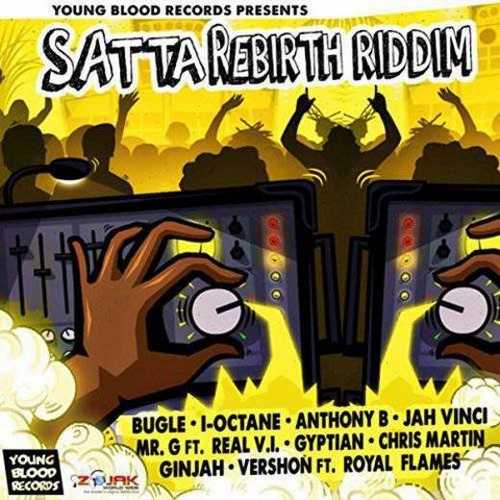 Young Blood Records and internationally renowned Jamaican saxophonist Dean Fraser team up for a superior recut of one of reggae’s best loved riddims: “Satta Massa Gana”. It’s the translation of the Amharic phrase “give thanks and praise”. The tune has been described as the national anthem of roots reggae. The Abyssinians recorded the song in 1969 for Coxsone’s Studio One, but he declined to release it. Two years later the group purchased the session tapes back from Coxsone and released the song (among others) with enormous success. Dodd responded with several answers versions and the riddim kept popular ever since. Dancehall artist Goofy aka Mr. G gathered several artists to voice the riddim and we love the result!

The ten track album features 9 vocal cuts plus the sax driven instrumental by Dean Fraser and respects and honours the original tune with its recognisable horns line. No weak tune here… strictly killers galore! Ginjah’s tune “Times Are Hard” – “Times are hard and people a cry cost of living gone out a space” – is among our favourites. Gyptian, who is best known for his romantic vocal output, delivers a powerful optimistic roots tune called “Revolutionist”. Loyal Flames aka Devar Oliver Stennett in combination with Vershon commands attention with his tune “White Line”. Christopher Martin relicks the “Black Cinderella” riddim with his seductive lovers tune “Love Me”. The producer himself delivers a strong lick with “Foot Steps”. His tune with deejay Real V.I. deals with the attack on Real V.I. which resulted in a confinement to a wheelchair. Bugle is going from strength to strength, and with his tune “Acceptance” he shines brightly fi real. Anthony B. showers us with an appeal that’s pure dynamite with his song “Duppy Bat”. Finally Jah Vinci blazes with fire and conviction as he delivers “Ask Your Self”.