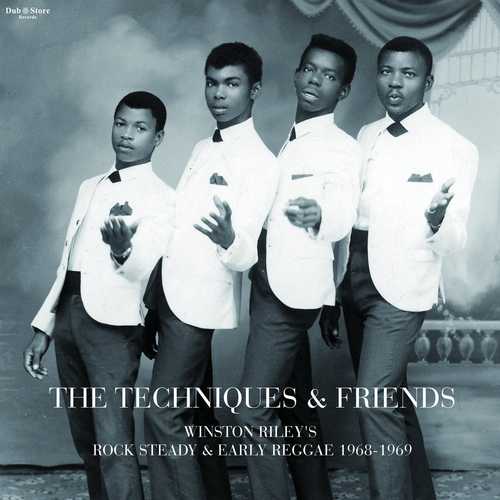 Winston Riley started his production career as a singer with an enviable track record, having formed the Techniques (originally consisting of Slim Smith, Franklyn White, Frederick Waite, and Winston Riley himself) in 1962 and hitting the top of the charts two years later with the splendid “Little Did You Know” for Duke Reid’s esteemed Treasure Isle label. When the frantic ska beat slowed down and turned into rocksteady Winston remained the only permanent component of the Techniques, arguably Jamaica’s finest vocal group.

As the beat changed yet again from rock steady to the faster reggae format, Winston considered turning to producing and in 1968 the group broke away from Duke Reid, and Winston Riley, with his brother Buster, borrowed enough money from his mother to start his own record label, for which he used the group’s name. They recorded several Techniques tracks for their label, which were fully the equal of their treasure Isle rocksteady classics, such as “Man Of My Word”, “One Day”, “What Am I To Do” and “Go Find Yourself A Fool”. The production of Johnny Osbourne’s “Come Back Darling” was an immediate success followed by an album of the same name. Other early productions included Johnny Osbourne’s “See And Blind” and “Purify Your Heart”, “So Afraid” from The Mad Lads, Alton Ellis’ “I’ll Be Waiting”, Lloyd Young’s “High Explosion”, Dennis Alcapone’s “Look Into Yourself”, The Shades’ “Never Gonna Give You Up”, Jimmy Riley’s “Prophecy”, and The Ethiopians’ “Promises”. These appeared on a variety of labels in Jamaica – Techniques, Wind, Serpent, Romax and Riley Inc.

In 1970 he produced his biggest ever hit “Double Barrel”, a ground breaking track that went on to be the biggest reggae track of 1971. After this pop success Winston Riley continued working as he always had done, producing top quality reggae tracks with a host of Jamaica’s finest singers and musicians. After opening his shop in Chancery Lane, he continued on his quest for the best throughout the ’70s, ’80s, ’90s and into the 21st century, never failing to bring his decades of experience and peerless production skills to bear on whatever contemporary music he was producing. In 1973 he achieved a huge Jamaican hit with “Stalag 17”, an instrumental by the Soul Syndicate band featuring the organ of Ansell Collins. In 1985 Winston Riley utilized an overdubbed cut of the riddim for Tenor Saw’s massive dancehall hit “Ring The Alarm”, which prompted the classic ‘one-riddim’ album “Stalag 17, 18 & 19”, later followed by a second set of “Stalag” versions called “Original Stalag 20”. The most important of Winston Riley produced digital tunes was the first hit from Super Cat entitled “Boops”.

Winston Riley was at the forefront of the Jamaican music business for over forty years, an authentic reggae polymath who had embraced the roles of singer, songwriter, arranger and producer. He was making plans for a new studio and museum in his Orange Street record shop but was plagued by a series of violent attacks. He was shot in August and later stabbed five times in September. Furthermore his record store in Kingston’s downtown business district was burned down. In 2012 he was brutally shot in the head and didn’t survive his injuries.

The Japanese record label Dub Store Records opens up the early Winston Riley archives for their current album “The Techniques & Friends – Winston Riley’s Rock Steady & Early Reggae 1968-1969”. This reissue label run by the eponymous Tokyo based record store aims at accurately covering the 50-plus years of Jamaican music with considerable success. The set covers the years 1968/1969 and opens in good style with the uptempo, ska influenced Dave Barker tune “Your Love Is A Game”. This gifted, sometimes underrated artist, with the toasting skills of a deejay as well as the vocal talents of a soulful singer is in top shape here! The Mad Lads (being the duo George Allison and Delroy Williams) had their finest stint at Studio One with the hits “Losing You”, “Ten To One” and “You’ll Never Know”. Here they bring the listener three tunes. The uptempo ode to “Mother Nature” and two soulful lovers tunes “I Never Know” and “So Afraid”. No information about The Shades who bring the uptempo, early reggae romantic tunes “Never Gonna Give You Up” and “She’s Gonna Marry Me”. The rest of the tunes are by The Techniques. The aforementioned “What Am I To Do” is a well known 1969 scorcher, revamped in 1974 by Pat Kelly. But there are more gems here! Their cover of The Lettermen’s pop hit “Where Were You” (sometimes credited to The Sensations) is a joy to your ears! It was released on a JA blank in 1969 with on the flip side “Just One Smile”. A true rocksteady scorcher is “Man Of My Word” sometimes misspelled as “Man Of My World”. Equally stunning is “Time Has Come” which was the flipside to “Man Of My Word”.

The album comes with an illustrated booklet and liner notes by Chris Lane.