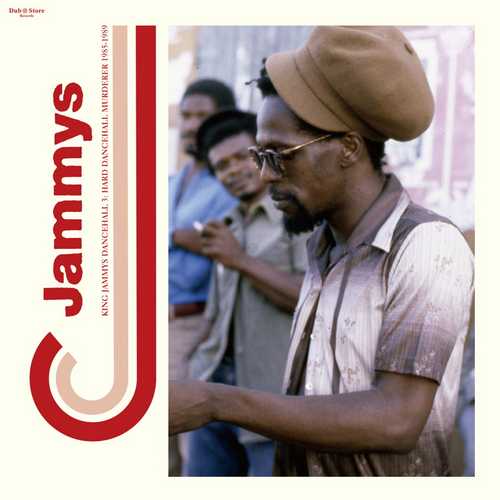 The set gets started with Gregory Isaacs’ “The Ruler” aka “Ruler For The Dance”, a sound-bwoy boast from the Cool Ruler across the same riddim as Admiral Tibet’s “Running From Reality”. It’s a great tune originally featured on a vinyl LP entitled “Reggae Sound War (The Soundclash): Electrocutioner Vol. 2”. Nitty Gritty’s style seemed made for the early digital riddims. He sang in the oddly expressive flat wail that was a digital counterpart to the Waterhouse style established by Michael Rose and Junior Reid during the early eighties. Also King Kong and Tenor Saw utilized a style similar to Nitty Gritty, although the latter was the most vocally accomplished. Nitty Gritty had his greatest impact with King Jammy for whom he recorded a string of hits. Here he’s present with “Butter Bread”, another quality tune he recorded for the King. “I Am Back” by Echo Minott was the artist’s come back tune in 1988, after he had become absent in the business and away from Jamaica for nearly 2 years. It’s a digi killer, followed by the matching “Trouble Nobody”, a next cut to Super Black’s “One Time Girlfriend”.

Johnny Osbourne, who had notched up significant successes in the dancehall explosion of the first half of the eighties, gave Jammy a string of best-selling singles. “Chain Robbery” is a big reality tune, one of his best recordings for King Jammy. “Musical Murder” is a real sound-bwoy anthem from Banana Man, who rides a digi version of Glen Brown’s 1970’s classic roots tune “Wicked Can’t Run Away” riddim in great style. King Kong’s solid “Can’t Ride Computer” is underpinned by King Jammy’s version of the “Tempo” riddim. Back to the sound-bwoy tune with first Robert Lee’s “Come Now”, from the vinyl LP “Electrocutioner Phase 1: Sound Wars”, followed by Pad Anthony’s “By Show Down” on the then popular “Tonight” riddim and Nitty Gritty’s “Rub A Dub Kill You”, who rides a cut of the “Rockfort Rock” riddim. Next comes Wayne Smith’s “Like A Dragon”, which came only out on the singer’s classic “Under Mi Sleng Teng” album. For the solid “Ram Up Every Corner” Tonto Irie skillfully delivers his lyrics across the riddim known from Half Pint’s “One Big Ghetto”, originally from The Blackstones’ roots classic “Open The Gates”.

Pad Anthony’s has a second sound-bwoy tune here called “Murderer”, an outstanding cut across the “Heavenless” riddim. The deejay Admiral Bailey joined King Jammy’s in 1986 and became a reggae superstar in 1987 with his massive hit “Punanny”. Here he brings a rough badman tune with “Me A De Danger” on the “Love Punaany Bad” riddim. Robert Lee & Bunny General adopted the phrasings of Wilson Pickett’s soul classic “Midnight Hour” for their nice sound-bwoy tune, which rounds off the vocal part of this set. And just like the previous two sets in this series, it continues with five dubwise versions worth hearing.

Conclusion Another great selection from King Jammy's huge catalogue. Worth adding to your collection!