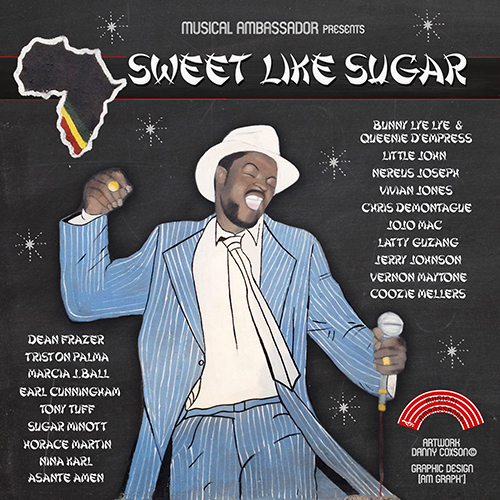 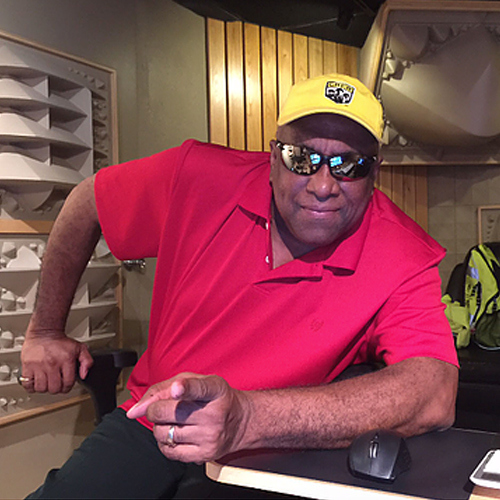 Lincoln “SUGAR” Minott’s contribution to Reggae music has proven to be undeniable and invaluable. His absolute legacy and influence has kept Jamaica’s treasured musical vibrations intact and his tremendous impact has captured the Heart and Soul of the far reaches of Creation. A man that rose from the ghetto to the international arena but never ever forgot his humble beginnings. An ambassador of positivity who whole heartedly gave everything forward to the music. A singer who had a keen eye for talent; brilliantly cementing the careers of such heavyweights as Little John, Triston Palma, Yami Bolo, Garnett Silk, Junior Reid, Little Kirk, White Mice, Nitty Gritty… the roll call is endless. A producer who was heavily responsible for the cultivation of Reggae movements in Japan; recalling Nahki and historic tours. A visionary whose impact on UK Lovers Rock is certifiably rock solid. An innovator whose Dancehall runnings run deep to this day. A humble spirit who added his sweet touch to the evolution of Jamaica music for over four decades. Volumes have been written about his endless abundance of diverse talent. “SWEET LIKE SUGAR” is a historic tribute album that heartically describes his Lion paw imprint that will never be tarnished.

It’s only natural that legendary producer TREVOR “BASSA” ELLIOTT (Musical Ambassador Productions) is the man to present this project to the world. Sugar gave Mr. Elliott the opportunity to prosper in the industry; a path navigated with integrity and grace. This multi talented ambassador has been producing historic albums for decades now. Consider Edi Fitzroy’s “Check For You Once” and Johnny Ringo’s “Cool Profile”; two classic sets from 1982. He’s been instrumental in the recognition and distribution of the essential Negus Roots label. He’s worked with the likes of Bobby Melody, Bob Andy, Bunny Lye Lye, Joseph Cotton, Horace Martin and so many more. “SWEET LIKE SUGAR” is deeply rooted with authenticity as it features artists that came up with Sugar, worked with Sugar or are directly influenced by his granulated sweetness. The most versatile tribute set since he flew home to Mt. Zion on July 10, 2010. It bears the mark of excellence and flow that’s made Musical Ambassador Productions one of the most respected and reliable in the entire industry.

Tony Tuff rose up with Sugar as members of “The African Brothers” as early as 1970. The legend delivers flawlessly on the anthemic “Give Me Jah Jah”. Foundation saxman Dean Fraser has lent his magic touch on countless Sugar sessions and delivers Zion high dimension to “Zion Awaits”, a superb version indeed! Mr. Triston Palma is another statesman who rose up tight with Sugar. In fact, Triston’s debut, “Presenting”, was produced by his Black Roots label. He revisits the classic “Every Little Thing” with a heartfelt vibe akin to Sugar’s unmistakable delivery. It’s essential to have Little John on board. It was Sugar who truly brought him into the scene alongside Triston. History recalls Little John on Captain Sinbad’s “51 Storm Me Never Born” (flip side of “River Jordan”). He’s at his best on “No Vacancy”; a piece of “Slice Of The Cake” album. “Come On Home” first surfaced on the timeless “Live Loving” album. The combination of veteran Bunny Lye Lye and Royal empress Queenie D’Empress is smashing! A seamless revisit that retains the urgency and injects added potency. Horace Martin has been part of Musical Ambassador family for years. The man who gave us “Watermelon Man” and countless other hits rides “My Love Is True” with absolute vision and command. The dynamic Chris Demontigue offers up a versatile take of “MR. D.C.” from the ruling “Showcase” album from 1979. The plea for easing up Babylon pressure on herb runnings is a prime example of Mr. Minott’s poignant social observing that rings true to this day… for real.

The flow continues with Sugar at the helm. “People Got To Know” (with Damian Keezy) transcends all musical boundaries. Sugar delivers with every fiber over a Nyahbinghi driven riddim that’s a testament to his songwriting genius. And he’s cool and deadly on “Believe In Yourself”. Musical exposure that he embraced all stylings from Roots to Dancehall and beyond with a touch all his own. With over 60 albums and hundreds of singles, he coated his catalogue with “sugar and spice” for “people of the world”. With his vision, he was able to balance quality and quantity… all killer, nah filler.

His work with Studio One resulted in many treasures. “Live Loving” is a standout from this bountiful time. The sensational Nina Karl approaches it with ethereal urgency, respect and appeal. Words cannot describe the beauty within this triumphancy! Jerry Johnson met Sugar at Wackies(New York) in the early ’80’s and the two became close as family. Mr. Johnson offered up a crucial tribute album shortly after Sugar’s passage home. A superb set that featured some of his final vocal trackings. He adds his “sax appeal” in dynamic style on “Only Jah”; an essential slice from 1983’s “With Lot’s Of Extra” set. This is mountain top vibration. Marcia J. Ball has shined bright on Mr. Elliott’s productions and is part of Keble “Cables” Drummond’s family. She glides across an achingly beautiful lick of “Vanity”; a track that is a defining factor of Sugar’s early career. Latty Guzang has been in Trevor’s musical tree for years also. His branches are blooming year after year. He absolutely spot on with “Feel The Rydim”; a spring heel anthem from 1985’s “Rydim” that was fueled by Sly & Robbie and Black Roots Players. A wise selection as it demonstrates that Sugar ruled the Dancehall and had the ability to adjust with changes in the dance. The genius Earl Cunningham has endured decades in the business and he delivers so nice on “Rough Old Life”; the most celebrated track from “Sufferer’s Choice” album. Earl approaches this serious Roots cut with equal caliber of smooth that Sugar did so many years ago. “We’re living a rough ole life… still I keep my vision of being in Jah Jah’s kingdom”. Word, sound have power!

Asante Amen is one of Jamaica’s top ranking vocalists, delivering masterclass tracks for Mr. Elliott and select producers. He shines like a blazing fire on “Hard Time Pressure”; from “Black Roots” album. This was the first track promoted from this project and is instant rewind material. Sugar spent extensive time in England between 1979-82 and recorded some gems at such studios at Easy Street. He recorded “Lover’s Rock” here; needless to say, he left quite an impact. “Good Thing Going” was recorded around this time and rocketed to #3 in The British Rock Charts in 1981. One of many vibes that caught the attention of major label interest. Empress Jo Jo Mac is a bonafide Royal talent all the way. She absolutely reigns on this smooth “thriller” with her unique soulful style. “Hang On Natty” is another offering from 1977’s “Live Loving” album. Coozie Mellers, a mainstay with Wackies and Jerry Johnson gives this the Heart and Soul treatment. Boom! “River Jordan”, another “Black Roots” highlight has been revisited numerous times over the years. Roots journeyman Nerious Joseph flows down this mystical and musical river with his warm and sweet style. The tribute closes out with two cuts selected from Sugar’s 1981 “African Girl” album. What a joy to hear Foundation statesman Vernon Maytone treat the title track in his timeless delivery. It’s as if destiny brought Mr. Buckley and this song together. Vibrancy and complete respect to Sugar’s soul abounds. “Penny For Your Song” is a powerful track in it’s own dimension. Vivian Jones spreads his “sugarlove” all over this hook, line and sinker. Nice inflection of Dancehall and Blues predominant here. A musical history lesson has been in full session…

Conclusion "SWEET LIKE SUGAR" is a truly engaging tribute and insight into the genius of Lincoln "SUGAR" Minott. A livication of one of Reggae music's most influential, spiritual and Heartical artists. A labour of Love spearheaded by Mr. Trevor Elliott; bringing together an incredibly talented roster of artists who culminate in One Love, One Heart and One Unity. Maximum respect to everyone involved in this historic tribute. Sugar, we love you continually... Go deh!!