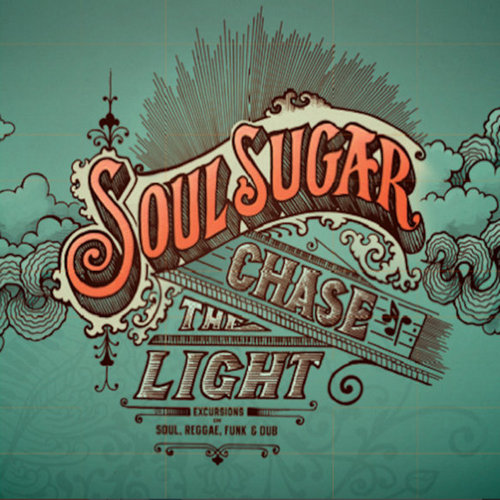 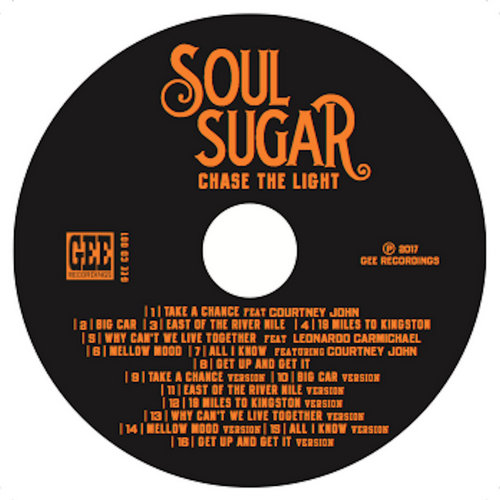 It actually was Courtney John’s killer single “All I Know”, which came across a funky reworking of Augustus Pablo’s “East Of The River Nile” that introduced us to the work of a music collective called Soul Sugar, which is led by Paris-based producer/arranger and multi-instrumentalist Guillaume ‘Gee’ Metenier. From then we were eagerly anticipating their next releases. More notable singles were issued including Soul Sugar’s superb rendition of Jackie Mittoo’s “Drum Song”, Leonardo Carmichael’s powerful version of the classic “Why Can’t We Live Together” and Courtney John’s beautiful “Strangers”.

Two of the aforementioned singles are included on the latest outing from Soul Sugar, an album entitled “Chase The Light”. The latter features heavy instrumentals and powerful songs, captivating the listener with a remarkable fusion of Roots Reggae, Psychedelic Soul and Funk grooves. And if you choose to purchase the CD, you can also fulljoy the dub versions of all the tracks. ‘Gee’ recorded the tracks for this album in France and Kingston, Jamaica with Yvo Abadi on drums, drummer dubmaster Jahno, and guitarist extraordinaire Thomas Naim. The analog production delivers solidly and keeps the groove alive from beginning to end.

The album opener “Take A Chance” reaffirms that the collaboration between respected Jamaican vocalist and songwriter Courtney John and Guillaume ‘Gee’ Metenier is a guarantee for notable offerings. Also notable are the beautiful reworkings of Jamaican instrumentals like the Studio One classic “Big Car” by Jackie Mittoo & Ernest Ranglin and Augustus Pablo’s “East Of The River Nile”. Next comes “19 Miles To Kingston”, which is a dubby killer instrumental. Leonardo Carmichael’s passionate, soulful vocal delivery in combination with the mesmerizing riddim makes his rendition of Timmy Thomas’ 1973 hit song “Why Can’t We Live Together” a winner. Back to the instrumentals again with the real nice “Mellow Mood”. And then there’s Courtney John’s “All I Know”, which still makes the hairs on the back of the neck stand on end. Before the dub versions come in, it’s the funky instrumental “Get Up And Get It” that rounds off the first part of the CD.

Conclusion Soul Sugar's "Chase The Light" is a thoroughly entertaining collection of tracks that simply rocks all the way!