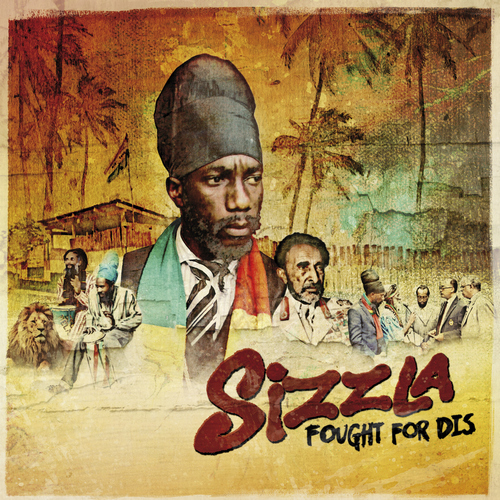 Any reggae fan who needs to be introduced to Sizzla and his music must have spent his time in outerspace during the past twenty years or so. Together with a new generation of singers like Luciano, Mikey General and Everton Blender and fellow turban-clad bobo chanter Anthony B, Miguel Orlando Collins aka Sizzla or Sizzla Kalonji were key figures in the so-called Rasta renaissance that took place in the mid-1990s.

Twenty years after the release of his landmark albums “Black Woman & Child” and “Praise Ye Jah”, which made him an international reggae icon, Sizzla is still on top of the game. With “Fought For Dis”, released on producer Anthony Senior’s respected Al.Ta.Fa.An label, he adds another album to his extensive catalogue. The 10 track album consists of previously unreleased singles as well as tunes already issued on compilation sets like “Don’t Worry”, the successful combination tune from 2012 with Gentleman & Mark Wonder. The album opens in a great way with the thought provoking title track “Fought For Dis”, which is underpinned by an appealing reggae riddim with Dean Fraser’s sax play adding a real nice touch. We’re always a bit sceptical when it comes to collaborations of reggae with hip hop artists. Most of the times it simply doesn’t work. And although not an entirely disappointing offering from Sizzla & M1 of Dead Prez, “Freedom” doesn’t strike a chord. Luckily the real reggae vibe returns with “Love You Jah Jah”, one of the album’s highlights.

Joining Sizzla on “Happy For You” are veteran Capleton and much promising young artist Vershon. Together these three deliver a decent tune, although Sizzla’s high pitch singing in the chorus can get a bit irritating after a while. Next comes “Show More Love”, a solid message tune in which Sizzla asks to stop the crime and violence and instead to show love and unite. It’s followed by another message tune wich more or less, but in a different direction, touches the same theme as its predecessor. “The Children Are The Future” is an awesome tune which at the end goes into dub territory. The lovers piece with Nakeisha, “Take My Breath”, is a cheerful up tempo party tune that urges one to move his dancing feet. With the 2004 released single “Much More” on Al.Ta.Fa.An’s infectious “Security” riddim the listener is treated to another winner, before “Jamaica”, done in collaboration with Sugar Cane, closes the album in fine style.

Conclusion Sizzla's "Fought For Dis" is a satisfying set with quite a few real good songs to fulljoy.