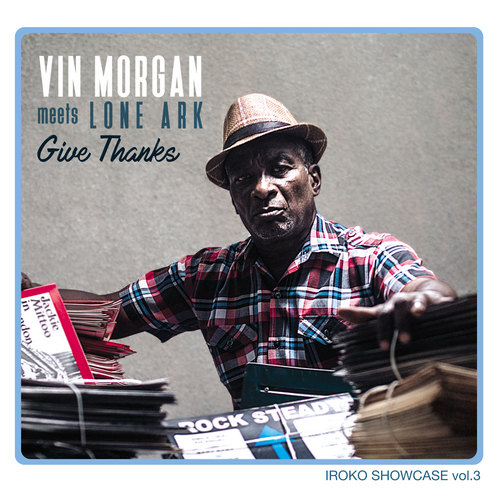 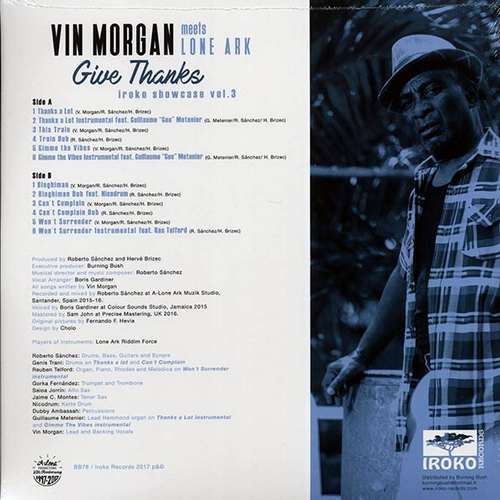 Title: Give Thanks ~ Iroko Shocase Vol. 3

The third volume in the ‘Iroko Showcase’ series, Vin Morgan’s “Give Thanks”, is another golden nugget from Roberto Sánchez, the Spanish music maestro who never ceases to amaze us!!! After Showcase albums with Noel Ellis and The Viceroys, it’s now veteran singer Vin Morgan who fully shines on another brilliant project from Roberto Sánchez and Iroko Records’ Herve Brizec.

Back in the days Vin Morgan was the resident singer of the Soul Defenders, a band that hailed from Linstead, St Catharine JA. In their few years at Studio One in the early 1970s, The Soul Defenders played on many classic tunes with the likes of Alton Ellis, Dennis Brown, and The Heptones, among many others. Beyond being the Studio One house band, the Soul Defenders were a true group in their own right, fronted by a glee club of singers – the Selected Few, Joseph Hill (later of Culture fame), Freddie McKay, Clifton Gibbs, and Vin Morgan (who also played keyboard and drums with the band). Vin Morgan’s incredibly “Face Your Trouble” for Studio One is one of the most haunting tunes the group ever recorded. Later collaborations of Vin Morgan with Jennifer Lara, Tyrone Taylor and JD Smoothe were also issued by Studio One.

In 2014 Vin Morgan reappeared on a brand new 7″ single called “Resilience”, produced by Boris Gardiner and issued by Iroko Records. And now, three years later, Iroko Records comes up with a complete new album from this relatively unknown veteran singer featuring six vocal cuts and their dubs/instrumental versions. With the superbly played riddims of the mighty Lone Ark Riddim Force and Roberto Sánchez’s magic touch at the mixing desk, Vin Morgan has been given everything he needed to excel from beginning to end. Listening to this album makes one really wonder why this great singer didn’t succeed in establishing a successful career. Anyway, it’s a good thing that he finally has been rescued from obscurity. All vocal tracks are gems in their own right and also their versions, with keyboardists Reuben Telford & Guillaume “Gee” Mettenier playing a notable role, are majestic offerings. Favourite tracks are the spiritual “Thanks A Lot” and its “Thanks A Lot Instrumental”, the gorgeous “Can’t Complain”, and the rootsy “Won’t Surrender”, although the others could easily become the next favourite tunes to listen to.