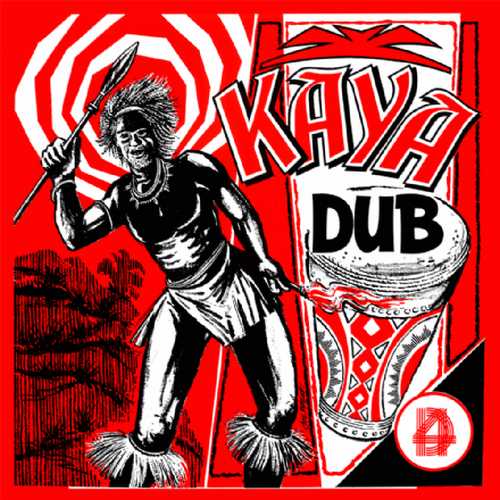 After having pleased dubheads with the release of hard-to-get vintage dub albums such as The Revolutionaries’ “Musical Dub Attack” and Scientist’s “Jah Life In Dub” and “The Dub Album They Didn’t Want You To Hear!”, Brooklyn based DKR (Digikiller/Deeper Knowledge) comes up with another noteworthy classic dub album entitled “Kaya Dub”. The latter, noted as the first ever proper dub LP pressed and released in New York City, was released on Percy Chin’s Kaya label in 1975 and shouldn’t be confused with the later released set by Bunny Lee & The Aggrovators, which  used the backing tracks from Bob Marley’s “Kaya” album.

The Kaya imprint was the first to showcase the partnership of Percy Chin and Hyman “Jah Life” Wright as producers and cornerstones of the burgeoning NYC reggae scene of the day. However this album, featuring tracks that originate from Jamaica, actually has been produced by Pat Francis aka Jah Lloyd and in fact contains the very same collection of dubs as Jah Lloyd’s “Herb Dub” (Micron label/JA) aka “Herbs Of Dub” (DIP label/UK). The titles of the dubs here differ from the Jah Lloyd release, but the music is the same.

“Kaya Dub” is a solid collection of very sparse and super-heavy dub mixes, with not much vocalizing or horn riffs. But it has lots of little subtle touches, which are mostly revealed after repeated play. Connoisseurs of reggae releases from the 1970s will surely recognize dubs to original tunes such as the Mighty Diamonds’ “Shame & Pride”, the Heptones’ “Meaning Of Life”, “Bingy Bunny’s “Coming Home To Zion”, a cut to the “Have Some Mercy / Spangler’s Clap” riddim and Yabby You’s “Conquering Lion”, which has been given the appropriate title “Conquering Dub Of Africa”. “Kaya Dub” serves as a great snapshot of the music and vibes of roots reggae in the mid 1970s, a real joy to listen to from beginning to end.