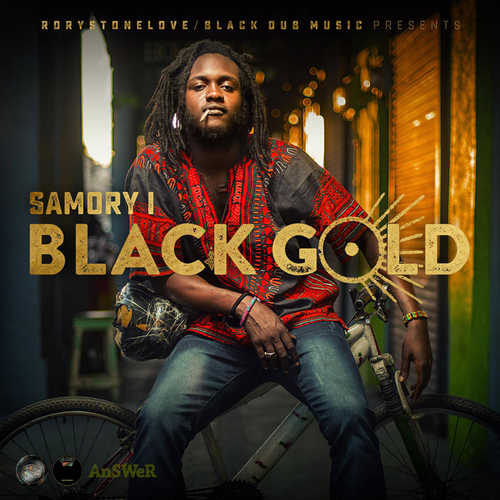 In recent times producer Rory “Stone Love” Gilligan has blessed the avid fan of authentic deep roots reggae with releases that, when played on a real good sound system, blows the listener away due to its great voices, distinctive majestic sounds and high quality standard. Albums such as Jah9’s “New Name” and Kristine Alicia’s “Songs From Zion”, the “Zeen” and “Braveheart” riddims and Addis Pablo’s single “Call Of The Righteous” from his upcoming album “Addis Pablo Meets Rory Stonelove Downtown” are cherished treasures in many roots fans’ collection.

After the release of Samory I’s big roots anthem and hit song “Rasta Nuh Gangsta”, the artist’s debut album became another much anticipated project produced by Rory Stonelove. And here it is, the aptly titled “Black Gold” set (just find out yourself why this is a totally fitting title) from the youth from the Kencot neighbourhood in Kingston JA. “Black Gold” is a totally stunning album recorded with and at Rory’s studio and featuring great musicians such as Kirk Bennet (drums), Donald Dennis and Aeion Hoilett (bass), Mitchum Khan Chin and Courtland “Gizmo” White (guitar), Carlton “Bubblers” Ogilvie (keys), Denver Smith (percussion), Sheldon “Atiiba” Bernard (flute) and a horns section consisting of Dean Fraser, Nambo Robinson, Dwight, Everal Gayle and Stingwray.

“Black Gold” is absolutely stellar throughout, offering the listener thirteen tracks of first-class musical delight. The album opens with “Son Of David”, a great cultural song that riddimwise somehow reminds of Bob Marley’s “The Heathen”, instantly grabs your attention to never let loose again. This gorgeous opener is followed by the extended version (9:16!) of the already known single “Rasta No Gangsta”. This huge tune is a reaction to the negatives that have been associated with Rastafari, emphasising that “Rasta is a peaceful man”. The song was written in a time of grief, when Samory I’s sister-in-law was killed while riding on a motorcycle with a man who was the target of gunmen. Next comes the sterling “Not Because”, which rounds off the opening part in a big way.

It’s striking to experience that each and every track that follows is a very strong offering, with some of them even being giant standouts. Truly amazing as this hardly ever happens when you listen to s debut album. Most of the times artists need a few albums before they are able to come up with a collection that fully convinces from beginning to end.

“Serve Jah” is a beautiful spiritual tune, while “Suit & Tie” (“I know the devil would a come for I in a suit and tie!”) is a powerful song that deals with the evils in Babylon system. Next comes the ‘natural mystic’ sounding “Lost Africans”, a bona fide gem that sends shivers down your spine. Then there’s “There Is A Spirit”, a praising song of sheer beauty. “Black Gold” is a love song, putting the title track’s choice down to the black race being the Almighty’s first creation and the first civilisations being on the African continent. Lyrically “Weed” goes beyond the obligatory Ganja song, which makes it a thoroughly interesting and enjoyable song to listen to. More worthy praising songs come in next; “Power” and “Fear Of Jah”. For the latter saxophonist Dean Fraser revisits the Pop-Tops hit “Mammy Blue”, which although a remarkable choice works well.

Although “Black Gold” has quite a few standouts, it pinnacles at Samory I’s blistering rendition of Syl Johnson’s classic civil rights soul anthem “Is It Because I’m Black”, previously given reggae takes by Ken Boothe, Senior Soul, Delroy Wilson and Nicky Thomas. Riddimwise the album’s closer, “Rastaman”, goes back to the classics, in this case to Tim Hardin’s much versioned “If I Were A Carpenter”.