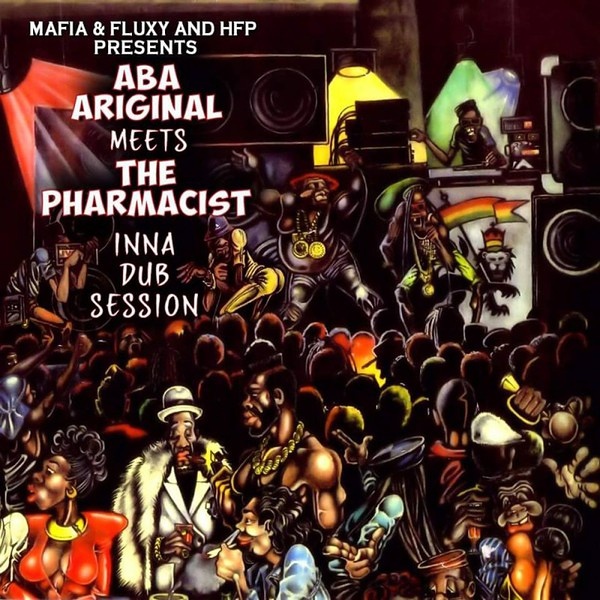 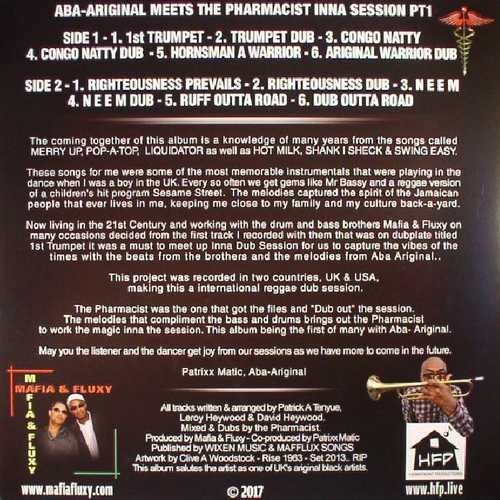 In 2015 and 2016, UK’s drum & bass duo and brothers Mafia & Fluxy (Leroy & Dave Heywood) produced two superb dub albums, “Introducing The Pharmacist” and “Dub Prescription” respectively. They were both done in collaboration with The Pharmacist, an until then rather unknown name in reggae and dub circles.

And now there’s a new noteworthy project out on the streets, the LP “Aba Ariginal Meets The Pharmacist Inna Dub Session”, which combines the forces of Mafia & Fluxy, dub wizzard The Pharmacist and veteran trumpeteer Patrick “Trixx” Tenyue aka Aba Ariginal, who has worked with Matumbi, Ruff Cutt Band, UB40, Maxi Priest, The Rolling Stones, Annie Lennox, The Wailers and many more… With this outstanding 12 track ‘Showcase’ LP, 6 superb instrumentals followed by their deadly dub versions, Mafia & Fluxy and their ‘partners in crime’ have set a new standard for UK produced reggae & dub music. What a sound!!! A real treat for those into heavyweight UK Roots sound system culture!!!

Aba Ariginal has worked on many occasions with Mafia & Fluxy and the first track he recorded with them was a dubplate entitled “1st Trumpet”, which was regularly played by UK’s Channel One (and in 2016 released on 7″ single). Also the mighty Aba-Shanti-I has been showcasing some amazing Aba Ariginal works as well through his sound over the last year.

Apart from the glorious “1st Trumpet” and its awesome dubbed up version entitled “Trumpet Dub” (which is known from “Introducing The Pharmacist”), this album contains solely killer instrumentals and dub versions. Aba Ariginal blows his melodies in majestic style over Mafia & Fluxy’s flawless played drum & bass dominated riddims. And with The Pharmacist at the controls it’s obvious you can’t go wrong. He has done a very good job in creating truly vital dub versions. It’s almost impossible to point out the highpoints of this set as every track is great to hear. So let’s stick to a much easier task i.e. mentioning personal favourites. These obviously include “1st Trumpet” and “Trumpet Dub”, but also “Congo Natty”, “Ariginal Warrior Dub”, “Righteousness Prevails”, “N E E M” and “Dub Outta Road”.

Conclusion From beginning to end this album is stamped with quality all over!!! A must-have for all followers of the UK Roots movement!!!