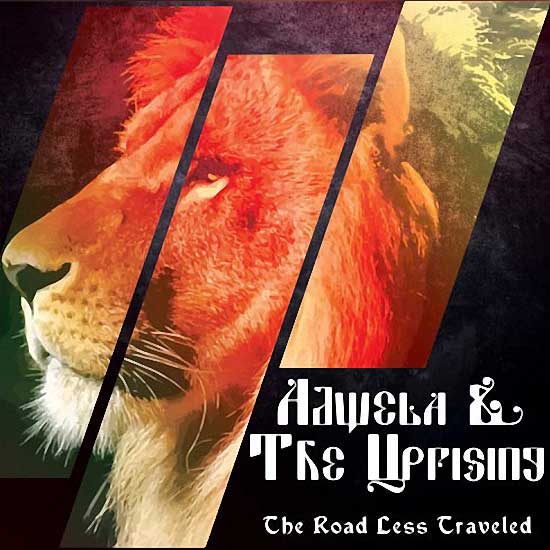 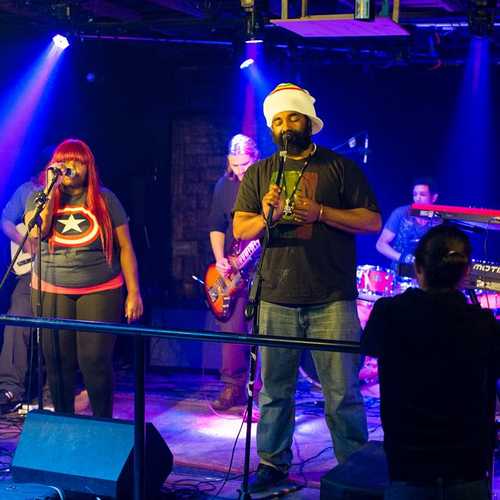 Nothing before it’s time. All things in due season. The true notions that Adwela & The Uprising take to Heart, Mind and Soul. The Virginia based Roots collective took two years to record their absolutely engaging debut, “The Road Less Traveled”. An original culmination of hard work and determination; a cultivation of message music with poignant urgency and pertinence…

The Roots ensemble is based in the vibrant musical hub of Virginia and have numerous awards since culminating in 2014. They won “Fan Favorite” at Culpeper Has Talent show. The following year, they took home “Best New Artist” at The Virginia Reggae Awards (this region is brimming with world class talent). Earlier this year, they won “Favorite Song” (Warrior) and “Favorite Guitarist” (Erik Arnoldson) at the aforementioned awards show. Adwela and crew are constantly touring and rehearsing with electrifying performances from the East to West Coast. They’ve opened for such legends as Third World, Ziggy Marley, Akae Beka, Tarrus Riley and The Wailers. The band has caught the attention of Raging Fyah; a link that will lead to international doors opening.

“Roll Call” grabs the listener’s attention from the get go. Anchored by an undiluted riddim, Adwela delivers in an original and flowing manner that flows in meditative tones. A Heartical utterance unto The Most High elevated by Pabloesque melodica and crucial bubbling. “Sweet Reggae” displays their sound is completely their own; no carbon copy here. Rohan’s lilting bass anchors the riddim with Rockei’s soulful backing vox floating ethereal. Adwela is a talented song arranger and lyrics are thoughtful and prosperous. One can sense the unity amongst singers and players of instruments. “The Fight” is one whopping great track! Roots Reggae is the foundation and crucial nuances of Rock are sprinkled across this anthem with Erik’s accomplished licks. Adwela declares “Keep fighting on , on our way to Zion” with powerful conviction. He possesses a wailing chant style that commands one’s attention. A deep and textured track that reflects their passion for King’s Music. Standout selection.

Versatility is in order on “Silent Cry”. Adwela chants skillfully over the soulful infused riddim. Rockei is upfront also with Empress vibes all the way strong. A deeply observant track about current runnings in Babylon with a caliber that will carry them to the international arena. No wonder this March, 2017 album debuted at #28 on I Tunes Reggae charts!! The vibes keep clear on “Irie”. A Jazz inflected gem that elevates Heart and Soul. Both vocalists flow just right and displays Adwela’s pure chanting style. Beautifully constructed song of positivity that’s an instant rewinder. This is a band with broad music range while keeping to the Roots of the matter all the while.

“One Plant” is a tight Roots Reggae energy with strength. Yes, herb anthems are the order of the day; this track is infectious to the core. With a dash of Dancehall and tight mix, this is radio and stage ready with international appeal. “Same Old Same (My Hometown)” has Marleyesque caliber. A song of seemingly personal trials and triumph over situations; Adwela is a messenger of King’s Music. Crucial “one drop” riddim with Rockei’s powerful backing vox. Serious vibes!! Thankfully, each song is long duration, allowing vocals and riddim to blossom and bloom. “Riot” continues the Royal vein like a mighty river. A fiery observation of today’s turbulence delivered proper. Lyrics of intelligence and riddim of wisdom. Another standout selection!

“Shackles & Bondage” is a multi layered bubbler that stands firm. Commencing with “big band” sound, Adwela delivers pure Fyah-“living in a world–shackles & bondage; they told me to cut my locks off”. No holding back on this poignant observation of a polluted system. Crisp musicianmanship is in full effect and this is another track with global importance and acceptance. The award winning, “Warrior” doesn’t disappoint!! A firmly Rooted track that raises the bar of message music. Flawless bass, drums and bubbling accentuate this tour-de-force. Dash in Erik’s rocking licks and ethereal backing vox from Rockei and this is a Royal occasion. The album closes with the powerful, “Wolves”. Adwela flows naturally, depicting “wolves in sheep’s clothing” and offers a history lesson sewed in truth. A masterclass arrangement of lyrics to riddim.

Each track has tremendous riddim impact and is embedded with deep observations and message to the people. There’s a broad spectrum of musical range anchored with original Roots Reggae. An album that fits in the “all killer, nah filler” category for sure. With the release of this album and the band’s relentless touring; the natural progression is the international arena. Conscious message music is thriving in 2017! Highest recommendation. Go deh!!

Conclusion The album by ADWELA & THE UPRISING, "The Road Less Traveled" is a truly stunning debut on many levels.