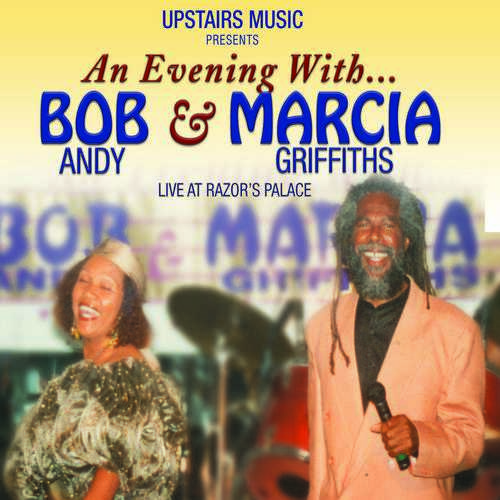 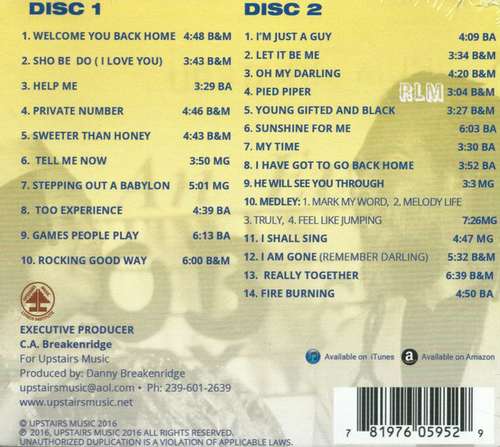 At any given time, there’s a historic Reggae concert happening across Creation. These celebrations are embedded in the attendee’s Heart and Soul. Over the decades, there’s been good documentation in audio and video format. History has been rightfully been documented by the unwavering vision of legendary producer/ambassador Danny Breakenridge and his stellar Upstairs Music label. How often has a BOB ANDY/MARCIA GRIFFITHS live concert been recorded and presented in crystal clear clarity? Never. This double disc recalls the legendary duo’s performance at the famed Razor’s Palace on July 9, 1995. One of the most heartfelt live CDs in many years….

Bob Andy and Marcia Griffiths both have stellar careers that started in the early ’60’s. From 1970-74, they joined musical forces and released chart toppers that remain mainstays in Reggae music today. Four classic duet albums have culminated over the years.Both artists are still active in this time thankfully. Circumstances led them to choose separate paths in 1974; Marcia joining The I-Threes and Bob (Keith Anderson) spreading his immense talents in other aspects. They’ve reunited over the years and this live set is a reflection of respect and synchronicity.

It’s important to recognize Danny Breakenridge and his enduring Upstairs Music label. A total expert in all aspects in the industry, he started the Florida based label in 1981 and has released classics by Ken Boothe, Bob Andy, Dobby Dobson, Leo Hall, Jackie Parris, Tony Greene and many more. With offices in Florida and Jamaica; he’s elemental with the legendary Tad’s label also. Expect great things from Mr. Breakenridge – past, present and future.

The vibes get started with the Studio One classic,”Welcome You Back Home”. The Blessed unity is absolute sweetness with both artists flourishing over one tight riddim! History recalling on “Sho Be Do (I Love You)”; a testament to the magic of the ’60s Kingston town. Ernest Wilson and Peter Austin originally penned this beauty. Both artists interact on a personal level with adoring audience throughout. The duo is flawless on “Help Me”; one of Bob’s countless compositions and the band is right on time. They performed the R’n’B classic “Private Number ” (from Young, Gifted & Black” album) frequently on their early ’70s European tours and the true essence of their talent is showcased in fine style. Great licks from gitsy Patrick! They revisit the Dobby Dobson classic, “Sweeter Than Honey” with grace and conviction.

The vibes get hotter with “Tell Me Now” with Marcia front and center; the riddim section providing urgency in full frequency. She continues with her “national anthem”-“Stepping Out A Babylon”. This late ’70s hit is so powerful for all times. Bob steps back in with one of his finest songs, “Too Experience” (from “Song Book” album). Since he recorded this classic at Studio One in the late ’60s, it’s been revisited by many artists but only Bob can do it just right. With full spectrum of his voice, this is an instant rewinder. Bob continues his mastery with “Games People Play” (first song he received monetary compensation for). He delivers with whole Heart and Soul and displays why he’s one of Reggae’s finest and enduring artists. Truly enjoying themselves, the duo delve into the timeless “Rocking Good Way” (from “Young, Gifted & Black” album) with a intoxicating scatting style that is versatile all the while.

Bob visits Alton Ellis O.D’s timeless “I’m Just A Guy” with steadfast delivery and recalls Jamaica music history with pure style. The band inflects some original touches that accentuates to the Highest. The vibes stay beautiful with their seamless unity on “Let It Be Me”. A delivery that stirs the audience and listener to the max. Riddim section in one accord!! “Oh My Darling” is a Jackie Opel classic that rolls back the years. In Ska motion, the duo roll over each other like a waterfall of musical vibration. The rapport with the audience is dynamic on this one!! “Pied Piper” was the duo’s second chartbuster in the dawn of the ’70s and the revisit is so important. Their ability to inject originality into “covers” is second to none. Pure energy from all on stage! The magic continues with “Young, Gifted & Black”; the Nina Simone classic that commenced the duo’s musical unity. The layers of energy are paramount and their live delivery is equal to when they first recorded it in 1970. Both artists so intact; that’s a fact. Bob’s songwriting is flush across the industry and “Sunshine For Me” is one of his finest. A highlight from his “Freely” album; he delivers with absolute soul power with the band in full swing. One element that stands out is both artists branch out and inject fresh air into each song. Standout selection!! Bob continues with two classics from his “Songbook” album. “My Time” and “I Have Got To Go Back Home” are delivered with Royal poise and immense vocal range. The results are sweetest emotions for the listener. This is Jamaican music history!!!

Marcia takes the mic for a slew of classics. “He Will See You Through” is such an upliftment; delivered with her golden voice. She goes through a medley of Studio One vibrations with “Mark My Word”/”Melody Life”/”Truly”/”Feel Like Jumping” with truth and conviction. The band flows flawlessly over the tracks written primarily by Bob and Jackie Mittoo. “I Shall Sing” is Marcia at her Empress best. A timeless anthem that’s an anchor in Reggae history. Track of beauty that was written by the extremely talented Annette Brissette. Bob returns for “I Am Gone”; with the mood turning into a Lover’s mood. The duo take it to a level with no ceiling and a vibe appealing to any music lover. Love shines bright on “Really Together”, a Studio One classic that became the title of their third duet album. Such a gorgeous track with singers and musicians on the levels of experience. The set closes with “Fire Burning”. One of Bob’s most pertinent observations of world movements. Masterpiece delivered with masterclass.

“AN EVENING WITH BOB ANDY & MARCIA GRIFFITHS” is certainly one of the most intimate and Heartical live recordings released in many years. It’s wonderful to have numerous Bob Marley, Peter Tosh, Gregory Isaacs, Augustus Pablo, Jimmy Cliff, Burning Spear live documentations out there; this presentation gives the massive another angle on the beauty of King’s Music in masterful caliber.

Conclusion A must for those familiar with these legendary artists and a clear insight for those exploring the deep essence of true Jamaican music history. Highest recommendation. Go deh!!