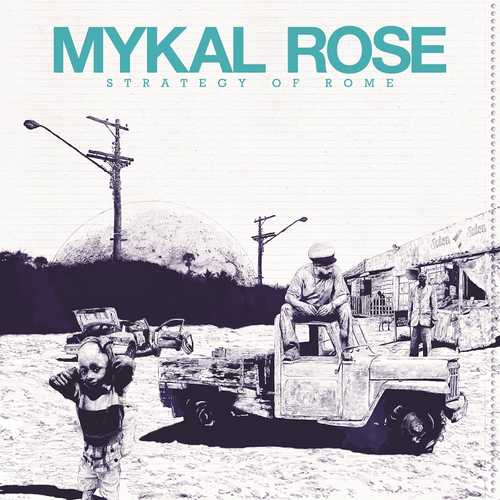 Mykal Rose (or Michael Rose as his name was spelled during his days with Black Uhuru and during the first years of his solo career until the release of “Sly & Robbie Presents Mykal Rose – The Taxi Sessions” in 1995) started his recording career for record producers Vivian Jackson aka Yabby You and Niney the Observer before he joined Black Uhuru in 1977 and led them to international success in the early 1980s. 40 years after becoming the lead singer of that very successful and popular vocal trio (they won the first-ever Grammy Award for reggae in 1985 for the album “Anthem”), Mykal Rose is still active in the studio and on stage.

After last year’s release of two studio albums, the King Jammy produced “Rasta State” and the remarkable “Sidewalk Steppa”, the singer with his trademark Waterhouse vocal style returns with another worthwhile collection of tunes entitled “Strategy Of Rome”. The latter was recorded primarily in Denmark on a week-long break from the singer’s European tour in the summer of 2016. The 11 track album is expertly produced by Adil “Jahdil” Nadri & Søeren “Pharfar” Schou of Ice Drop Records, two of the most talented and innovative artists/ producers/ musicians out of Denmark, well known for their high professional standards in music. And thus it’s not surprising that the “Strategy Of Rome” album sparkles with crisp production values.

The album opens with the excellent roots tune “Give Thanks” across the “Cold Times” riddim from 2015. A great way to start the album, instantly making clear that although, over 40 years in business, the veteran singer’s powerful voice shows no signs of wear. Besides that such an opener sets expectations high for the rest of the tracks. Most of the tracks indeed live up to expectations, but there are also a few that fail to make a totally serious impression. These include “On The Move Again” and “Downpresser Man”. The tunes that come very close to the vibes of Black Uhuru are the awesome herb anthem “Mr Collie” (previously released in 2008 and now re-appearing in a different version) and “Get Rid Of Trouble”. These are a real joy to listen to. This also goes for his praises to the King in “Dem Want”, the infectious “Wish To Life” from last year’s “Digi Mi Digi Riddim EP”, and the title track “Strategy Of Rome”.

Conclusion A solid and thoroughly entertaining album from this veteran singer.