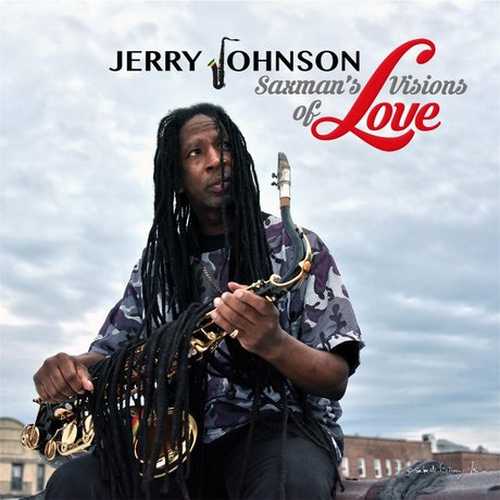 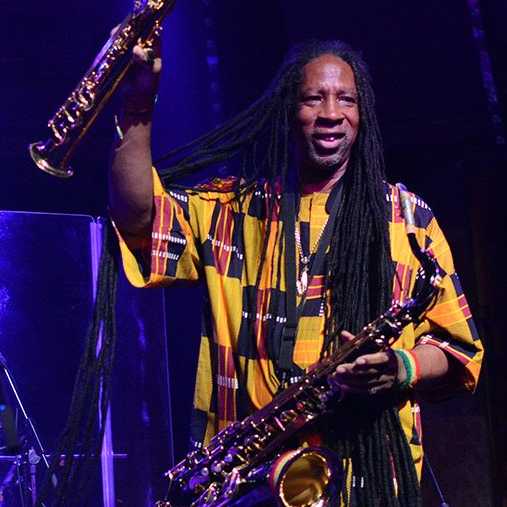 The importance of the saxophone has been paramount throughout the course of Jamaican music history. From Ska to Rocksteady to Roots Reggae and today’s upfront vibrations; it’s crucial to real authentic sounds. The limitless talent of JERRY JOHNSON has graced countless live and studio sessions since the late ’70s. Consistently in demand, he finds the time to release triumphant solo albums; time after time with unwavering and dynamic delivery. His latest album, “SAXMAN’s VISIONS OF LOVE” absolutely cements his credentials as one of the premier sax players in the business. Embracing Foundation tradition with a fresh musical breeze guaranteed to please…

Jerry Johnson’s exposure to the music scene began in the early ’70s. The Bronx (New York) was, is and always will be a musical hotbed of real deal talent. At a local barber shop, Jerry’s love of music was realized amid the company of his father and trumpeter Lester Minott (the uncle of Sugar Minott). His father owned a nightclub; an opportunity for the youthful Jerry to witness the likes of Bunny Rugs, Lester Sterling (Skatalites), Byron Lee, Phyllis Dillon and Denroy Morgan and The Black Eagles early in their careers. The sax man has never looked back. His earliest works were with Reckless Breed and the formation of Lloyd Barnes’ legendary Wackies label. As part of Wackies Rhythm Force, his early work can be heard on classics by John Clarke, Wayne Jarrett, Horace Andy, Sugar Minott, Jah Batta, Milton Henry; the list is endless… In 1982, Jerry’s solo debut, “For All Seasons”, was released in dynamic Wackies style. A critically acclaimed masterpiece, the music world took notice… In 1987, he linked with Roland Alphonso for “Saxman Special”; a project that showcased his ability to play with Foundation caliber. He quickly followed up with “The Score” (Wackies, 1988).

As mentioned earlier, the music industry had taken notice of his immense talent. It’s important to focus on the artists who came calling, Reggae and otherwise. His work can be found on albums by Bruce Cockburn, KRS One, Natalie Merchant and Linkin Park. Inside Reggae circles, his sax appeal showed up on classics by Cornell Campbell, Dennis EMMANUEL Brown, Sly & Robbie’s “Silent Assasin”, Shelly Thunder, Sister Carol, Owen Grey, Nitty Gritty’s “General Penitentiary”, Max Romeo, Shaggy, Lee Perry, Frankie Paul, Audley Rollens, Kymani Marley and Burning Spear’s “Jah Is Real”. This is a short list of his impeccable body of work. Mr. Johnson caught the attention of the legendary Steel Pulse and he elevated their sound for most of the ’90s. Since 2012, Jerry is now a permanent element of Steel Pulse. In between his consistent touring with Steel Pulse’s “Liberation Posse”, Jerry has released a slew of crucial solo projects with clarity and consistency. Albums like “Reggae Vibes”, “Just Cooling”, “Brass Rootz International” (w/Neville Anderson) are amazing projects. In 2010, he released the timeless, “Jerry Johnson Plays The Hits Of Lincoln Sugar Minott”. This heartfelt tribute to his close brother features some of Sugar’s final vocal sessions. One of Jerry’s finest productions!! He has continued with “Saxman At Work”, “Many Moods Of Saxman JJ” and last year’s “Dub Session” (winner of Akademia’s “best Reggae album”). This man has unlimited vision; the formula of “quality and quantity” is in full locomotion. Each album has a distinctive essence and elements of true experience.

His new album continues his link with musicians and engineers that have graced his previous classics; a Wackies connection intertwined after so many years. Jerry scores on alto, tenor and soprano sax. Veteran Kevin Batchelor is superb on trumpet. Keys bubbled by Jerry, Sidney Mills and Earl Appleton. Crucial licks from Coozie Mellers and Ainsworth Clarke. Drum programs organized by Jerry, Sidney and Coozie/Charles Mellers (another Royal Family of Reggae)… Jerry is a mastercraftsman in aspects of the industry; he recorded and mixed the bulk of tracks at his Saxman’s Music Lab. Additional recording/mixing at SPI Studios by Sidney Mills. This project was mastered by Marc Lawrence. The aforementioned are all true veterans of the business and deserve rightful recognition.

“Saxman’s Visions Of Love” is one smooth testament of Love; presented in original blue print and crucial revisits of Love songs – something Jerry does so well. Kicks off with the original “Thinking Of You”. Jerry glides Royally over a lilting riddim with crucial licks from Ainsworth and Jerry bubbling like a champion. Jerry has the ability to communicate wholeheartedly through his sax. There are no boundaries of his range and versatility. Boom! “Right Track” was beautifully done by Phyllis Dillon and Hopeton Lewis and is perfect for here. On previous albums, Jerry has done upstanding interpretations of classics like “Love Has Found It’s Way” (“Many Moods” album) and “His Majesty Is Coming” (“Saxman At Work” album). Strictly Royal vibes on “Right Track”. His sax elevations are sky high with a fresh interpretation built on decades of experience. It’s 2017, but he cradles the Foundation sax tradition in full course. Coozie adding great guitar with Jerry building a superb riddim! “Bless” is smooth across the board. Jerry steps up to the mic and delivers a crisp vocal atmosphere. “GOD bless the man who teaches the youth to be strong”… Jerry’s sax work is seamed with Kevin Batchelor’s mighty trumpet. These two have played together on countless sessions; including historic Steel Pulse concerts. A song that grows on the listener and one can’t help but feel positive and inspired!

The levels are taken up several notches with “What’s Going On”. The Marvin Gaye CLASSIC has been relicked many times; a Jerry Johnson treatment is just amazing! Instantly engaging, Jerry’s sax captivates and stirs up pure Heart and undiluted energy. The spot on riddim is elevated by the ethereal harmonies by Brianna Mellers (another member of the musically rich family). Dash in some remarkable trumpet solos by Kevin Batchelor and this is a standout selection!! Love’s on the branches with “It’s Time For Amour”. An original gem that bears signature “Saxman” sounds. This easy skanker recalls the absolute magic found on “For All Seasons”. Nicely textured riddim and great display of Jerry’s work at the mixing board; nice and easy without any clutter. Heavy stereo caliber! Jerry grew up in the musically potent early 1970s; it’s natural for him to recall standout moments from those times. He interprets The Dramatics soulful “In The Rain” from 1972. Once again, he adds his smooth vocals with a musical backbone flecked with Coozie’s guitar and overall urgent atmosphere. Jerry has that ability to take the listener “there”; that musically pleasing level that leaves one and ones completely satisfied. Instant rewinder!!

“Feel The Breeze” is a tour-de-force written by Sidney Mills and Jerry. Sidney has been a mainstay in the New York Roots scene since 1981 and has been bubbling with Steel Pulse since 1988 and produces great works from his Living Room Records outpost. This track is granite tuff and displays the true vision of these two Lions. Flawless mix by Sidney; Jerry and Kevin take the musical breeze that’s bound to please. This is a radio ready track that’s deserving of international airplay. This is real authentic sound! The magic continues with “Without You”. A masterful revisit of the original with Steel Pulse veteran Selwyn Brown adding some Ites vocals. Earl Appleton offers organ work of Pablo Black caliber. It’s plain to hear that Jerry can ride any riddim; thankfully he has killer riddims to work with from start to finish. “Brotherly Love” is Mr. Johnson firing on all cylinders. This track recalls memories of his late ’80s Wackies masterpiece, “The Score”. The riddim section offers up a rock solid platform where Jerry takes the listener on a flight to the Highest regions. His keyboard work here is on par with his “saxability”. There’s pure excitement on “Love Kiss”. What a thing!! This is truly a special track with Jerry playing and exuding every fiber of his Heart and Soul. Mr. Batchelor comes in with a vibe that the late, great Nambo Robinson carried. A beautiful piece of work that will be in heavy rotation. “Why Did You Change” is an original Saxman special. After an intro from Ranking Joe, Jerry takes the mic and delivers inna UK Lovers Rock style that evokes the works of the great Investigators. Truly soulful vocals accentuated by Rightful sax treatment. Mr. Johnson has the talent to release a vocal set indeed! Truly pleasing track. This album closes with “Since You Came Into My Life”. Yes, the 1990 combination with J.C. Lodge and Sugar Minott that was a highlight from her “Selfish Lover” album produced by Gussie Clarke and written by Michael Bennett. Jerry charts this Lovers anthem with flowing sensibility and the triumphant trumpet from Mr. Batchelor is pure excitement. Positivity and vitality exudes from this vibration.

As with prior projects, this is “all killer, nah filler” material. A perfect balance of original material and Royal interpretations of some crucial moments in music history. He surrounds himself with veterans who are totally in tune with his vision. An essential addition to your collection. Go deh!!

Conclusion Jerry Johnson's "Saxman's Visions Of Love" is a truly satisfying album from start to finish.