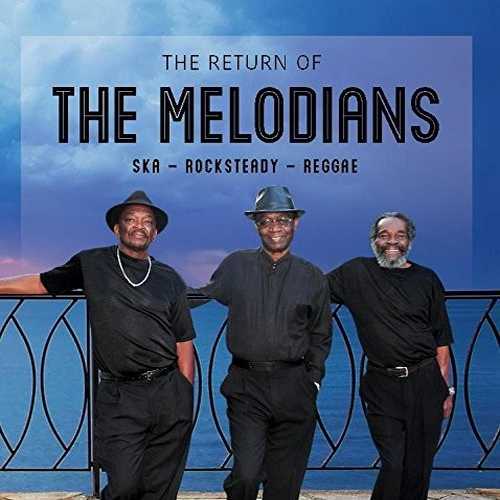 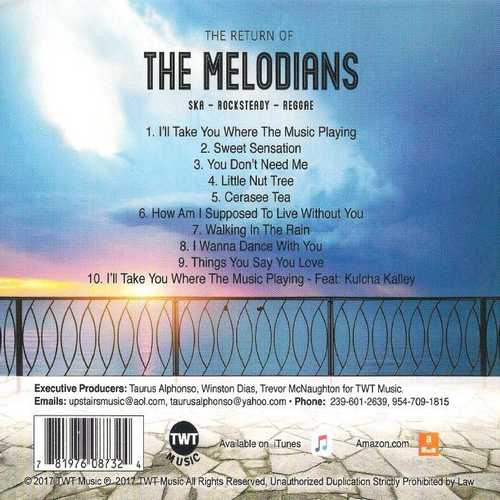 Every significant evolvement in Jamaican music history; from Ska to Rocksteady to Reggae, has the essence of harmony trios leaving an undeniable vibration that lives on to this day. Countless groups may be recalled; there’s still a few active today that have endured the three aforementioned eras of timeless sounds. The Cables (original members intact) are still active. One must mention The Silvertones and The Heptones (who were formed right before Rocksteady times). THE MELODIANS are in this enduring category; with runnings traced back to Kingston in 1963. True, all original members of aforementioned (except for The Cables) are not with the current lineups; due to circumstances but the tradition carries true with at least one founding member. The Melodians’ founding singer Trevor McNaughton brings two veteran singers into the studio for the just released “THE RETURN OF THE MELODIANS (SKA-ROCKSTEADY-REGGAE)” and the results are nothing short of beautiful and brings forth memories by the score. The Foundation tradition is intact in these perilous times…

The Melodians started in Greenwich Town in the musically hot year of 1963. Trevor McNaughton brought in Brent Dowe and Tony Brevett (nephew of Skatalites bassist Lloyd Brevett. Early contributions are attributed also to Bramwell Brown and Renford Coyle. They started with Prince Buster before Mr. Ken Boothe led them to the doors of Studio One. This resulted in such hits like “Lay It On” (one of the first songs reflecting shift from Ska to Rocksteady), “Meet Me” and “Let’s Join Hands Together”. The trio moved on to Duke Reid’s Treasure Isle with the timeless “You Have Caught Me” and “You Don’t Need Me”. 1968 saw them move to Sonia Pottinger. “Swing & Dine” and “Little Nut Tree” became huge hits and stand firm to this day! The following year, Leslie Kong saw their immense talent and “Rivers Of Babylon” (arguably one of the first Rasta anthems of the era; unarguably one of the finest songs in Jamaica music history) raised international acclaim. The vibes didn’t stop there, “Sweet Sensation” solidified their limitless talent. After the passing of Mr. Kong, the group continued to record for a variety of producers; including great sessions with Lee Perry. The members chose solo careers in the early ’70s, with each artist recording massive hits in their own right.

Since that time, the original members reunited with renewed energy. In 1983, RAS Records released “Irie Feeling”; one of the label’s first releases and sparked renewed interest in the group globally. The early ’90s saw the release of the classic “Song Of Love” (Tappa, 1992) and the group was active on the live circuit to wide acclaim.

The activity continued strong in the early part of the millennium with more consistent live bookings and an extensive US West Coast Tour. “Live At The Belly Up Tavern”(2005) showed their live power. Sadly, Brent Dowe flew home to Mt. Zion on Jan 28, 2006. The remaining members continued to perform in honor of the great Mr. Dowe. In 2012, the SOLID “Lyrics To Riddim” album was released on Willie Lindo’s Heavybeat Records with six songs recorded with Brent prior to his passing. Yes indeed, the trio presented Roots and Culture anthems with equal caliber of their early runnings. The following year, Tony flew home. Trevor was concrete in keeping MELODIANS vibrations alive. In 2014, he brought in Taurus Alphonso (Mellowtones) and Winston Dias (The Movers). Both artists have decades of experience and endurance. The Florida based trio performed at “This Is Ska Festival” (Germany/2016), the esteemed “Skamouth Music Festival” (UK/April 2017) and Barcelona’s NOWA festival (Spain/June 2017) to massive response. The future is wide open…

It’s only natural that Willie Lindo would get this project on the proper levels. Producer of the prior MELODIANS project, the Heavy Beat mastermind has produced hit after hit for the likes of Dennis Emmanuel Brown, Beres Hammond, Boris Gardiner; the list is endless. This project was assisted by Danny Breakenridge (Upstairs Music); whose depth in the business is extensive on all levels. You get these two producers together and something special is the result. This album is released on the group’s TWT label. A sterling ensemble of musicians were on board to complement the trio’s exhaustive rehearsals. Talking about Benbow Creary, HeavyBeat Crew and I Paul Gauntlett (this writer has said it before and says it again – I Paul is one of the most solid riddim builders around) on drums. SOLID bass from Robbie Shakespeare, I Paul and Willie Lindo. Great bubbling from Kashief Lindo and I Paul. Mr. Lindo’s talent runs true within his musical family; Kashief has become a premier singer/musician from youthman days. Guitar by Willie and I Paul. Percussion by I Paul and Heavybeat Crew. Superior horn work from the versatile John Erinosho. Sessions took place at Heavy Beat and I-Tek Studios with I Paul being the recording engineer and master mixing by the HeavyBeat crew. Solid movements from South Florida; past, present and future.

“I’ll Take You Where The Music Playing” kicks off the album like a musical stream. The original lineup visited the Drifters classic in the early ’70s and Trevor and company sound crisp as can be. Over a solid structure, the trio are seamless and bring forth true emotion and urgency. Vibes alive. The decades roll back with a crucial revisit of “Sweet Sensation”. Rocksteady ready; Winston sings with equal conviction as when this historic track was first recorded. One can sense the trio mesh together naturally; nothing overextended. Ethereal harmonic vibes with the riddim in full locomotion. “You Don’t Need Me” is an example of their magic at Treasure Isle. Tony wrote this track and delivers it with full range of Heart and Soul. Winston and Alphonso are spot on. The listener is transported to a prolific time in Kingston. The musicianship echoes experience and just captures true essence. Boom!

Yes, “Little Nut Tree”, produced by Danny Breakenridge, has been revisited many times since it first ruled the dance in 1968. In 2017, it sounds as beautiful as ever. Every fiber of Heart and Soul is in full bloom from singers and musicians. It exudes a crisp quality that encompasses the limitless talent of Melodians sound. Instant rewinder!! Winston scored a ’60s hit with “Cerasee Tea” and the revisit fits just nice in the album. A Ska soaked gem that’s guaranteed to move your feet. Winston has superb songwriting abilities and delivers an upfront atmosphere with lilting harmonies from his musical partners. John Erinosho delivers some crucial horn work over the real deal riddim. Standout selection!!

The versatility of the trio is showcased on “How Am I Supposed To Live Without You?”. Yes, the song that Laura Branigan and Michael Bolton sang in the early and late ’80s. Give it to The Melodians and something special happens. The glorious harmonies and riddimatic treatment makes this ballad overproof of the vocal powers of the trio. Easy vibrations for a Sunday afternoon. The Melodians scored one of their many hits with “Walking In The Rain” in 1970. A vibrant ode that marked the shift from Rocksteady to early Reggae runnings. The current trio displays an array of different harmony approaches throughout the album; this track, featuring Trevor on lead vox, echoes more of an upfront and ‘country;’ feel, like early Maytals or Silvertones work. From lyrics to riddim, a masterful revisit all the way. “I Wanna Dance With You” is a bubbling Reggae delight! With Taurus lead vox, there’s a smooth Lover’s vibe that’s so beautiful. Anchored by a crucial riddim and textured harmony; this one is a complete winner!

The vibes get hot with “Things You Say You Love”. This was a song originally done by The Jamaicans; then flawlessly realized by The Melodians around 1970. A slice of Jamaican history presented flawlessly over a horn driven and guitar fueled locomotion that’s pure excitement. The trio just flows in one Royal unity. One can sense they put in a tremendous amount of time to get the sound just right. No rushings here, just beautiful music that shines like a blazing Fyah. The album closes with the first track taken several notches higher with chanter Kulcha Kalley. He adds urgent chat with Daddy U ROY caliber vibes. A conscious artiste that needs to be recorded more!

“THE RETURN OF THE MELODIANS” is a standout in a year of some seriously great albums from FOUNDATION artists. A true commitment from all involved to keep the historic integrity of Jamaican music intact and an delight for fans, old and new. Trevor has gone the distance to keep The Melodians tradition in forward locomotion. This album represents the quality and professionalism that happens when unwavering ambassadors of the industry come together. Go deh!

Conclusion A fine piece of work that's necessary to your collection.