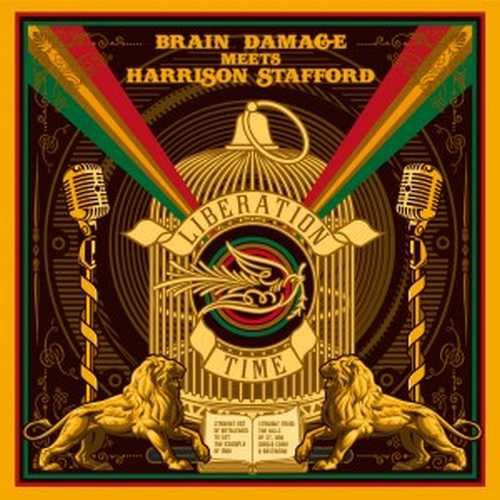 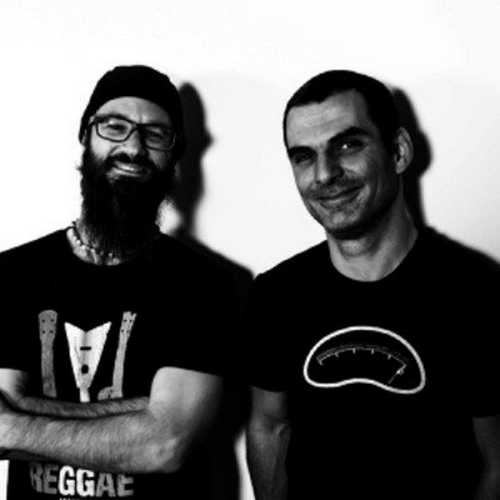 Something truly transcending and monumental is bound to happen when to revolutionary messenjahs combine their Royal talents after spending two decades delivering groundbreaking work on parallel levels. Talking about French Dub pioneer Martin Nathan(Brain Damage) and multi leveled Roots crusader Harrison Stafford (Groundation, Professor Band). The upcoming “LIBERATION TIME” is a Zionesque unification that shows no boundaries and absolutely elevates the spectrum of King’s Music. Both artists are firmly committed in their vision of universal cry of liberation, equality and justice and a profound testament flows freely within the heights of this project.

It’s essential to discuss the Roots and branches of these two soldiers of real deal music. Martin Nathan is absolutely a pioneer of French Dub movements and the concept of “live Dub” in this musically rich region. In 1999, he and bassist Raphael Talis founded Brain Damage; originally cutting teeth with Dub collective/label Bangarang. Hailing from St. Etienne, progressive movements began. Martin produced the flawless “Brain Booster”; a musical moment that sounded off the French Dub “steppas” movement. Linking with UK stalwarts like Zion Train, Alpha & Omega and The Disciples, the duo began historic live shows with multitude and magnitude. In 2002, Martin linked with the veteran Tena Stelin and “Genetic Weapon” is a bin shaker to this day. The same year, the debut, “Always Greener” was released to wide acclaim.

Brain Damage has focused on many degrees of Dub theory; 2004’s “Ashes To Ashes” was an ethno Dub gem. In 2006, their works were released on Jarring Effects label (this stands firm to this day). The same year, “Spoken Dub Manifesto Vol.1” showed another focus on Dub with crucial results. The collective started working with international artists like Black Sifrichi, Mark Stewart and Hakim Bey. The groundbreaking vision continued with more great works, both live and studio. Raphael parted ways in 2011; Martin has carried on with masterclass ability. Projects with Vibronics, Sir Jean and High Tone ensued.

In 2015, Martin trodded to Kingston and linked with veteran producer Samuel Clayton Jr (Toots & The Maytals, Steel Pulse, Sebastian Sturm and many more) and the experience culminated in arguably Brain Damage’s finest projects to date. “Walk The Walk” is a result of Harry J’s sessions with Horace Andy, Willi Williams, Winston McAnuff, Ras Michael and Kiddus I. The organic atmosphere intertwined with deep Roots is a testament to Martin’s talent after a dozen albums. He followed up with the Dub companion, “Talk The Talk”; just an impeccable musical vessel. Over the years, Mr. Nathan has presented the realms of Dub like no other. He’s pushed the boundaries while keeping Dub theory intact. There’s a revolutionary step embedded within his productions; an intoxicatingly engaging progression. He joins Harrison for an extensive European tour that stretches into 2018. This ambassador is ready for all points-north, east, west and south.

Harrison Stafford’s musical trod began around the same time with the formation of the world renowned GROUNDATION. Attending Sonoma State University, he formed the multi textured group alongside keyboardist Marcus Urani and bassie Ryan Newman (both still active in the group). The following year, their debut, “Young Tree”; garnered critical acclaim. Harrison is also known as “Professor”; he taught “History Of Reggae Music” at his university between 1999-2001. The follow up, “Each One Teach One” (2001) is powerful message music with Marcia Higgs and Ras Michael in full contribution. Further albums featured the likes of Don Carlos, Apple Gabriel, I Jahman Levi and Cedric Myton. Each album displays undiluted layers of Jazz, Funk and poly riddims that showed no boundaries and the revolutionary message became more powerful with each album and lively live performance. For example, “Hebron Gate”(2002) depicted “Dragon Wars” that affect all nations. The group has been consistently active in studio and the international arena with limitless vibrations. After 9 albums, the group is taking a break while Harrison pursues magnificent projects.

Back in 2008, the three founding members released “Rockamovya”; a profound Reggae/Jazz gem furthered by Will Bernard and legendary drummer Horsemouth Wallace. In 2010, Harrison delved into revolutionary side projects as a musical ambassador for the oppressed trodding in Creation. In a brilliant direction, he started “Professor” movements. Linking with Horsemouth, Flabba Holt, Dalton Browne, Obeah Denton, he released “Madness” (2011); an undiluted portrait of Israeli-Palestinian conflicts he observed first hand. He followed up with “Throw Down Your Arms” (live cd, dvd set) that showcased the unity of musicians and his new vision. In 2015, he took to the production chair and released “Natty Will Fly Again”(w/Winston Jarrett/Ashanti Roy/Pablo Moses) and also released “Holding On To Jah”; a monumental documentary that was a decade in the making. Last year, Harrison released the third “Professor” album, “One Dance”. Just a few months ago, he released Pablo Moses’ “The Itinuation”; an absolute tour-de-force. In essence, Harrison is a multi talented ambassador who pushes the boundaries much like Martin. This musical link was destined to happen, both artists running parallelisms within the music. This project allowed the two to link as one and the results are amazing!!

The ethereal sessions took place at JFX Studio (Lyon, France). Martin is a master riddim builder; handling all instrumentation except for El Profe’s horns on “Harrison Hello” and “Baby” and Harrison’s percussions on “Pick Up Yourself” and “Open Up”. Martin expertly mixed the project with mastering by the legendary Jim Fox at Lion & Fox Studio(Washington DC). Honorable mention to Mr. Fox; he has engineered hundreds of classic albums (bulk of Ras Records catalogue and extensive work on Groundation’s catalogue). Any album with his contribution is going to be Royal.

“Liberation Time” opens with the triumphant title track. The atmosphere opens wide Zion gates. Harrison wails in ethereal manners. “Oh JAH, it’s a liberation time”. His delivery is the most powerful and seasoned to date. Combine that with Martin’s superb riddim construction accentuated with crucial slide guitar and urgent drum rolls and this is piece of JAH art. The mixing is utterly original and is a showcase of Martin’s JAH given skills! Instant rewinder. “Everyone A Christ” is majestic in nature-“straight from the hills of St. Ann, here comes a Rastaman”. This is a serious reasoning describing the appalling runnings in Babylon and replacing false institutions with a Rightful Revolution. Harrison is an observant and thoughtful songwriter all the way. This track shows a wailing and Heartical vocal style that draws the listener in. Martin is spot on with the layered riddim that is on par with the power of the track. Excellent use of echo chamber and subtly unique Dub treatments. This is a song that the late, great Joseph Hill or Joe Higgs could have constructed. It’s that powerful. Real deal situation!!

The mystic vibes continue with “Singing Soldiers”. A Niyabinghi driven anthem of justice and the power of King’s Music globally. Harrison recalls Robert Nesta Marley and Peter Tosh with pure Love and wholeheartedly chants for revolutionary message to continue within the Royal music. Magnificent riddim with Martin presenting a stark atmosphere with taut drumming, versatile bubbling and a rock solid musical platform. Boom!! This is a project focusing on the true essence of King’s Music and “Rebel Music” keeps the integrity intact. Riddimwise, this is an early Reggae atmosphere created with Heart and Soul. Harrison pours every fiber of his Blessed soul into a Roots orchestration and observation of rebel alliance needed across Creation. In the latter portion of this gem, Martin inflects a truly engaging Dub storm. His approach is tasty and in just the right places; never overbearing at all. This is absolutely a firmament of the respect and unity these two soldiers have for one another. Just amazing! “Harrison Hello” is a lively interlude that exemplifies the love that France has shown Harrison on his numerous sojourns to this musically hot region. Singing sweetly in French, he rides the lively riddim kicked up by the beautiful horn work by El Profe. One can only wish this was a full length track but there’s crucial vibes in the minute and a half.

“Stand By Me” flows like a river in springtime. Harrison delivers in a fiery chantjay style. “I come to conquer hate… to free mankind and liberate”. This is a Zionesque ode for all to rise up in consciousness. Martin’s riddim is mind blowing! The lilting bass line is full tilt with subtly beautiful mixing that takes the listener to starship Africa. Strong track!! “Baby” is a track of Marleyesque proportions. Though this is not a Groundation project, it evokes fond memories of sighting Harrison and Groundation performing early Bob Marley tracks during “Marley Tribute” concerts on foggy nights in San Francisco around year 2000. Harrison is at his soulful best; wailing a Lovers track that’s instantly classic. Martin’s ability to mesh an engaging early reggae riddim with original and urgent Dub nuances is something truly special. El Profe is “horns up” again on this tour-de-force. Standout selection all the way strong! JAH rebel and royal tones sum up “Raw Talking Rebels”. A musical locomotion that bubbles on the frontline. Harrison delivers an unapologetic observation of Babylon runnings – “where we gonna go from here-hospital, cemetery or jail?” Powerful lyrics to riddim with singer and musician firing on all cylinders.

Martin has the ability to navigate through Harrison’s vocals with masterclass; steering the tracks to heights not heard before. Another standout scorcher! “Pick Up Yourself” is pure dynamite. The taut riddim is accentuated by Professor’s seasoned percussion. He calls the massive to move out of slumber and forward with progress. Martin lays down a multi dimensional atmosphere all his own but slight nuances of Neil Fraser’s prowness of the mixing board. Powerful tracking from start to finish. The project closes with “Open Up”, an expressive gesture of brilliance. Vocally defiant, Harrison’s utterances to The Most High is brimming with truth and conviction. Certainly one of the deepest singers/songwriters active today. Martin offers up a lively riddim detonating with licks and kicks and textured “organ”ising that’s superb. A testament to Kingly character.

BRAIN DAMAGE MEETS HARRISON STAFFORD – “LIBERATION TIME” delivers Royal vibrations completely original and utterly amazing. Harrison delivers his most powerful vocalisms to date and Martin’s complete vision makes this a contender for one of the premier albums of the year and will not be forgotten amid the constant flow of new releases. Harrison is recognized all over Creation. Martin was known as “Reggae’s best kept secret” in one article, but this stunning album will allow that to change. Two humble soldiers delivering real authentic sounds. Maximum gratitude to Max (IWelcom Agency), who does an impressive job promoting this album and many other important works – past, present and future. Highest recommendation! Go deh!