Macka B – Health Is Wealth 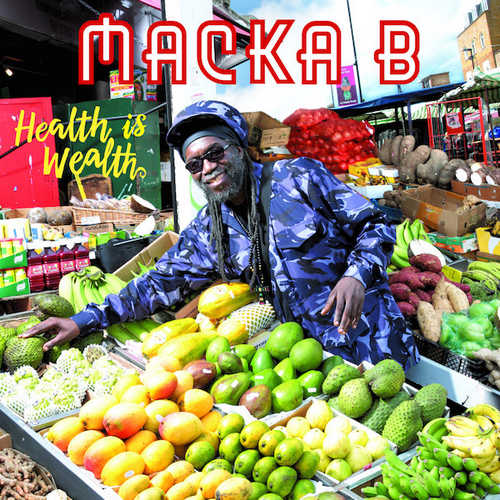 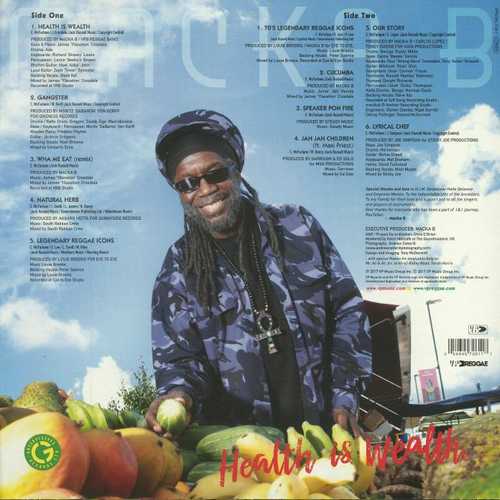 Title: Macka B – Health Is Wealth

After more than 30 years in reggae business, long time veteran and leading figure in UK reggae scene Macka B is still going strong, as a live act touring the world and also as a recording artist. This year he also became a ‘You Tube’ celebrity generating a staggering amount of views as curator of his ‘Medical Mondays’ and ‘Wha Me Eat Wednesdays’ videos, inspiring children, teenagers, young adults and older people with his call to conscious healthy eating.

With the latter in mind, this brand new project “Health Is Wealth” is a natural part of his current activities. On the 6-panel digipak with 8-page booklet and 12 track vinyl LP with standard sleeve jacket Macka B elucidates his lifestyle as a vegan Rastaman. Of course, “Health Is Wealth” not solely is about food and physical health, but as we know from all his previous album releases also features spiritual and social messages. A few tracks including “Gangster” on Oneness Records’ “Yemisi” riddim, “Wha Me Eat (Remix)” and “Cucumba” have already reached reggae fans worldwide; the rest of the album consists of occasional humorous fresh material.

The title track “Health Is Wealth”, with Macka B’s instantly identifiable sound and lyrical delivery, opens the album in a big way. It’s infectious tune that immediately sticks to your head and makes you sing along with the chorus. Next comes the 2015 released “Gangster” with lyrics that really stick to your soul, followed by “Wha Me Eat (Remix)” seeing Macka B utilize his well known fast-chatting style. “Natural Herb”, a tune about no chemical weed and legalizing, comes across South Rakkas Crew’s wicked remake of the “Sleng Teng” riddim. It rounds off a wonderful opening of an album that is brimful of quality conscious reggae tunes.

Nice offerings are the Louie Brooks produced name dropping tunes “Legendary Reggae Icons” and “70’s Legendary Reggae Icons” across relicked riddim versions of Slim Smith & The Uniques’ “My Conversation” and Barrington Levy’s “Here I Come” respectively. And the word ‘nice’ also applies to “Speaker On Fire”. Then there’s the solid “Jah Jah Children”, a hefty rendition of Ras Michael & The Sons Of Negus’ roots anthem “None A Jah Jah Children No Cry” from 1975, with a guest appearance of Maxi Priest. It’s followed by the matching “Our Story”, which just like the compelling “Mama Africa” was recorded at Tuff gong Recording Studio with some of Jamaica’s finest musicians including George “Dusty” Miller, Dannie “Bassie” Dennis, Paul “Wrong Move” Crossdale, Mitchum “Khan” Chin, Tony “Asher” Brissett, Dean Fraser, Nambo Robinson, Dwight Richards, Sticky Thmpson and Bongo Herman. “Lyrical Chef” brings pure listening pleasure and the same goes for the Mafia & Fluxy produced “Excess Baggage”, an educational song about losing weight. “Nah Go Back There” is a strong message tune and so is “See Dem from Far”. The real highlight is the impressive “My King”, a beautiful acapella sung tune utilizing the melody of Satta-Massa-Gana, in which Macka B expresses his deep devotion and love to His Imperial Majesty.