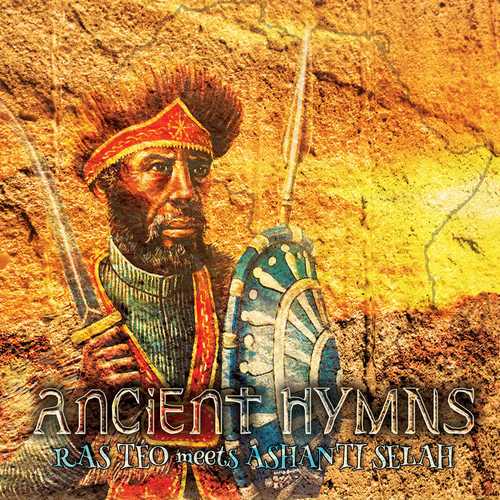 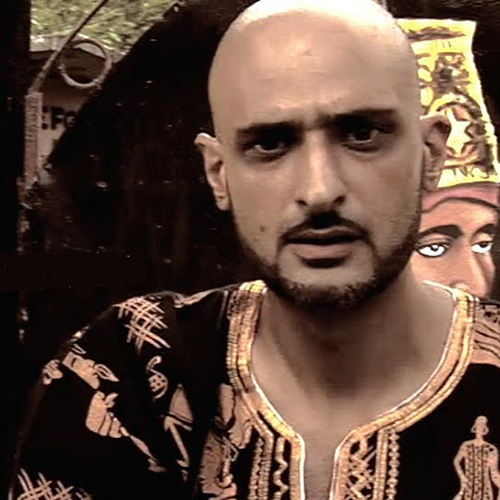 2017 has been a consistently solid year with important works from Foundation statesmen and conscious Lions maturing in their careers. The Royal messenjah RAS TEO released the triumphant “Timeless” earlier this year. Well, the Rootsman comes forth again; teaming up with UK master Ashanti Selah (son of legendary Aba Shanti-I) with a musical testament firmly presented in Kingly character. “ANCIENT HYMNS” is destined to be celebrated as one of the finest projects of this year and certainly puts both ambassadors as masters of message music. Serious thing…

“ANCIENT HYMNS” is RAS TEO’s fifth full length project and broadens his solid connectivity with like minded ambassadors across Creation. ASHANTI SELAH has contributed on prior albums; the full force collaboration was destined to manifest. Ras Teo (Teo Hartoonian) earliest works are magnificent and embedded in solid Steppa’s style; like 2009’s “Mystic Morning”. The presentation of “Bredda Daniel” was a total organic movement; principles that the Rootsman has carried true with “Timeless” and the album in discussion. Ashanti Selah has prevailed with UK vibrations in more of a Digital approach (with upstanding results). After reasoning with Ras Teo; the son of the legendary Aba Shanti-I shows his organic touch is Royally adhesive to this monumental project. He has done superb works with the likes of Vivian Jones, Ariwa posse, Iration Steppas, Jr. Roy and many more. Both messenjahs will carry JAH works in full glory for years to come. Ras Teo has upcoming projects that bear an absolute Zion imprint bound for “extra classic” category. Ashanti Selah is making his mark as one of the premier producers and bubblers in the UK.

This album continues the three region unification that has made prior albums so poignant. JA/UK/USA Roots movements in full locomotion. The tracks were recorded at the legendary Caveman Studios (JA), Ras Teo’s Red Rum Studio (US) with flawless mix by Ashanti Selah at his mystic Selah Dub Studio (UK). The riddim section is essentially the same skill set that provided such urgent vibrations on Ras Teo’s past three albums. Drums by Horsemouth Wallace and the late, great Style Scott. Serious “organ”izing by Ashanti and Ras Teo’s longtime link Boi. Ashanti Selah crucial on bass with Ricky Roots Tafari on “King’s Highway”. Guitar licks by Ashanti, Jamie Downton, Boi and Gyasi Crosdale. Veteran UK Rootsman I-David (David Arrowsmith) adds ethereal melodica and has been a principle element in Ras Teo’s sound for many years. Percussions by Roots ambassador Jonah Dan, Micah, Ras Teo, I-David, Binghi James and Ashanti. Ras Teo brings in a majestic horn section to elevate his sound. The legendary Calvin “Bubbles” Cameron and Vivian Scott shined on “Timeless”. He brought back Brian Wallace, Joe Stanley and Ryan who truly enhanced “Show I The Way” (2011) and Brian “horns up” on “Bredda Daniel” (2015). These musicians are truly sky high in their ability! Ethereal backing vox from Matt, California Roots singer JAH EYE, Monique and Everton “Caveman” Moore. Ras Teo has a long standing link with the aforementioned and the Love and Respect is felt throughout.

This project kicks off with “Greedy Dog”. This is pure excellence. The atmosphere is pure elevation; fueled by Ashanti’s incredible bubbling, triumphant horn blasts and organic texture that is King’s Music! Ras Teo flows in a hearty style that permeates truth and observation. The listener is treated to an extended mix showcasing the Roots orchestration of the riddim section. “Reggae Music” is Ras Teo at his wailing best. Certainly a live feel riddimwise, the atmosphere is filled with percussive fyah, crucial Horsemouth drums and tasty licks. The total love of Reggae music is uttered with no apology. Masterpiece! Ashanti’s talent of letting each instrument shine is exceptional; Brian’s trumpet adds Ites dimension. All cylinders firing on “Frontline”. Progressive Roots music with layers of crucial arrangement. Ras Teo delivers a soulful anthem with a Bernard Collins caliber quality. He’s a firm Rastaman and his powerful lyrics attest to that. Superb musical arrangements all the way; Ashanti’s organ playing is on par with the best in the business. Standout in all aspects! “When Jah Arise” is an extended cut that evokes memories of the exaltations found on his “Bredda Daniel” album. Riding a flawless musical backbone, he delivers a history lesson of great importance. Dash in Zionesque harmonies and textured arrangements and this is an instant rewinder! The extended mix is a pure showcase of Ashanti Selah’s talent at the mixing board. He holds true tradition while allowing his fresh approach to blend in just right. A track of beauty.

The Kingly character continues with “Come”. An ode to the power of Rastafari delivered in Royal vein. Ras Teo trods in Shashamane style with potent lyrics. The riddim is ripe with I-David’s melodica, Ashanti’s bass and organ lilting triumphant and an overall atmosphere that harks to hot Kingston sessions of the late ’70’s. You want real authentic sound? On full display throughout this glorious testament. There’s a crucial story that coincides with the regal “Vision Of Redemption”. The enduring Roots statesman Fred Locks (Elliott Stafford) has been an integral element in the furtherment of Ras Teo’s movements; musically and otherwise. The veteran wrote this track and was “all in” when Ras Teo decided to sing it. Like a Roots conductor, Fred Locks arranged the vibes at Caveman Studios and brought in the Empress Monique to add backing vox. The results are “inicredible”. “I saw Jah Rastafari sitting on his throne in Mt. Zion”. This is an ancient hymn with vocal power that is on par with Fred Locks’ magnificent works. Ras Teo sings with sweet diversity bound by his faith in The Most High. Monique is angelic in her contributions; with a riddimatic essence from players of instruments that’s bound for fulljoyment. Ras Teo never presents a diluted message and “Drive Them Away” is undiluted brilliance! “Truth drive them away, smoke drive them away, Ital every day”. A pure message of conscious trodding in this time to keep wickedness at bay. Superb flow of lyrics to riddim with Ashanti displaying a “bluesly” piano vibe and subtle licks making this a masterclass track.

“Warning Warning” is potent message music. Ras Teo delivers with full urgency about Judgement days with total potency. The riddim is a vibrant bubbling platform with Ashanti adding a tasty Dub treatment. This is a bin shaking delight!! “Chatty Mouth” has a distinctive and crisp atmosphere; akin to that forward UK sound. This is a Rootical anthem with killer licks and kicks and Niyabinghi flow that’s original blue print. Ras Teo has nuff versatility in his approach; this flows so smooth. Things get mighty with “Mandela”. This has an ISREAL Vibration caliber to it; an excitable tribute to the great Nelson Mandela. There’s a joyful exuberance throughout this universal statement. Standout selection all the way! “Ethiopian” is deepest Roots territory with historic virtues. Ras Teo chants as a humble warrior with the power and conviction of a true veteran. SOLID riddim Foundation anchored by taut drums, bass and Ashanti’s spot on bubbling. Another upstanding arrangement. One can know nothing was rushed or pushed through hastily on these sessions.

“King’s Highway” is a Rightful musical trod indeed. “Rise to the new day, respect to the elder… step on the King’s Highway”. Honourable lyrics to The Most High accentuated by a spark igniting riddim. Masterclass mix on board! The Royal vibes continue with “Took Us Away”. Progressive Roots music!! With a lilting riddim flowing with guitar licks akin to what gitsy Darryl Thompson supplied to early ’80s Black Uhuru classics. A message of the wickedness that has occurred throughout ancient times and the power of The Most High. An ancient hymn; yes indeed! The album closes with “400 Years”. A sound scape of masterclass. Aided by incredible piano work by Ashanti Selah, Ras Teo delivers one of his most poignant tracks to date. He wholeheartedly wails in highest heights. The plight is brought to full light in JAH sight. The manifestation of these two messenjahs is front and centre and certainly a track to cherish for years to come.

It’s clear that RAS TEO has limitless and important message music to offer on a truly consistent level. One might think there would be at least one “filler” track on his slew of recent albums. Not the case at all; this is a firmly committed Rootsman who crafts his works with no partiality. It exemplifies the upstanding multi talents of Ashanti Selah. He has been immersed in crucial sounds since youth man days and he carries a broad vision of originality and urgency that will ring true for years to come. This is a must listen presentation and Highest recommendation! Go deh!!

Conclusion The album Ras Teo Meets Ashanti Selah - Ancient Hymns is a triumph in all aspects.