The Breadwinners – By The Sweat Of Your Brow 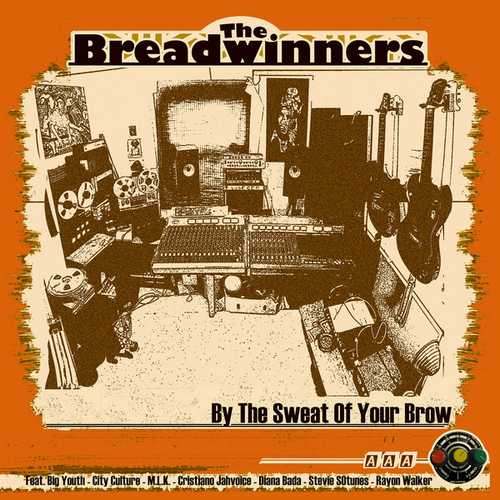 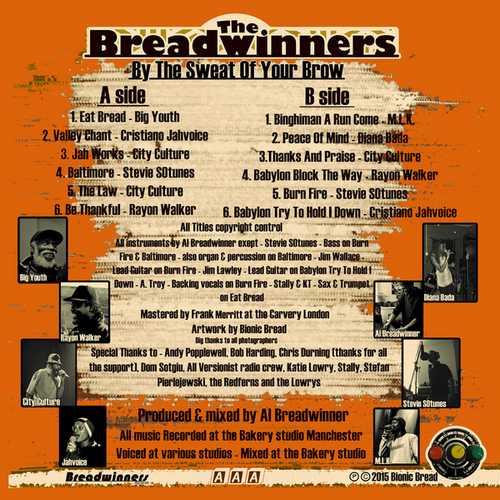 Title: The Breadwinners – By The Sweat Of Your Brow

Throughout Creation, there’s some fully committed ambassadors who are able to mesh together their own studio, their own riddims and own productions with flawless results bound in tradition where nothing artificial filters in. One multi talent is Al Breadwinner (Al Redfern), who has been releasing classic albums from his Manchester based Bakery Studio to huge acclaim. His brand new album, “M.L.K. & The Breadwinners – The World Is In Trouble” is in heavy rotation. A previous gem needs to be discussed first. Released in late 2015, “By The Sweat Of Your Brow” is a bin shaking delight that is a firm showcase of his incredible vision.

Away from the musical buzz in London, Al has been creating and producing truly important works for quite a while in the northern city of Manchester. A region where veteran Prince Hammer resides and the late, great Bobby Melody spent time at. He began his career gathering analogue equipment that creates sound that hark back to the ’70s. He linked with King Spinna Records (the masterminds behind the legendary Blood & Fire label) and movements progressed. His first breakthrough was “Dubs Unlimited” (2012, King Spinna Records), an instant classic that created a musical stir.

He continued with some crucial singles and Dub mixes for various artists. In 2015, he produced Haji Mike & The Breadwinners’ “Midnight Stories At 3.A.M”; a powerful link with the veteran Dub poet. He released the album in discussion later that year. He has stayed consistent with contributions to Purpleman’s killer “Do Good” 7″ (2016) and massive works with Marcus I and Dub Wave. Influenced by the likes of Glen Brown, Niney The Observer and Lee Perry, his Bakery Studio is cooking up organic goods and he spins the best on the widely respected Outta Mi Yard Radio network. In the near future, expect a new album from Marcus I and a Vin Gordon/Nat Birchall album inna ’70s tradition. A humble multi talent whose contributions will be embraced for years to come.

Al builds the bulk of his riddims by himself but he has solid contributions on this album. Stevie SOtunes-bass, organ and percussion on his tracks. Jim Wallace-lead guitar on “Burn Fire”. Jim Lawley-lead guitar on “Babylon Try To Hold I Down”. Great sax/trumpet work from Stally/KT on “Eat Bread”. Al produced and mixed the ites affair at Bakery Studio with vocals tracked at various studios.

The Breadwinners – By The Sweat Of Your Brow

The album opens with Big Youth’s “Eat Bread” (the link resulted from King Spinna’s many connections). The legendary chanter’s magic was revealed on “Joy”, a killer track from “Dubs Unlimited”. He is in vintage form over a rock solid riddim bound in ’70s tradition. Al’s riddim building and tasty mixing is a testament to the integrity of King’s Music. Stand out selection!! The seriously talented Christiano Jahvoice possesses a Royal vocal delivery akin to Crucial Vibes and other great groups/singers at the dawn of the ’80s. “Valley Chant” is a glorious track over a hypnotically pulsating Breadwinner riddim. Nothing artificial here, undiluted lyrics to riddim resulting in triumphant vibrations. City Culture’s “Jah Works” is sheer brilliance. He’s a top ranking chanter with I Roy caliber and offers up fresh originality. The riddim is a stripped down affair; allowing the lilting bass, taut drums and bubbling to shine. Al is nice and easy on the analogue mix. Reel to real situation and full appreciation!

“Baltimore” has been licked numerous times with great results. The highly talented Stevie SOtunes is so crucial on his revisit, vocally and musically. He injects a fresh urgency to the classic with a faster pace on the mic than prior licks and tasty bass work that Al expertly puts up front. Pure Breadwinner vibes here; straight no chaser. Instant rewind for sure!! City Culture comes forth again with the engaging “The Law”. A Dread affair with vibes that recall the late, great Dub poet Michael Smith. Potent lyrical flow over a vibrant riddim built by Al. The listener is taken back to steaming hot Kingston sessions of decades ago. Detonating and bin shaking atmosphere. “Be Thankful” is dished up by the versatile Rayon Walker. This is skanking delight with Mr. Walker singing pure reality over a tremendous riddim that would fit nice as a Discomix. Al is limitless in his musical ability and his unwavering commitment of presenting true King’s Music is on full display. TOP GRADE vibrations..

M.L.K. (Mohammed Lamin Kamara) and Al have just released a crucial new album and “Binghiman A Come” is a great look why the two have continued to work together. Over a Black Arkesque riddim, the Royal singer offers a Roots intellect of the highest order. A humble and deep singer, he has a bright future in store. This is a masterclass gem from The Bakery with ital and original ingredients. Al works with a plethora of talented artists; Diana Bada is no exception. With Nigerian roots, she has two solid albums to her name. “Peace Of Mind” displays her smooth vocalisms all the way. Al offers up another incredible riddim with nuances of Roots Radics but totally original. Killer track!! City Culture shows up again on “Thanks And Praise”. He’s a versatile chanter with a razor sharp singjay approach that’s no carbon copy. His deadly delivery is complemented by Breadwinner’s relentlessly brilliant musical backbone. Tasty Dub treatments make this another standout selection.

Rayon Walker is dynamic on “Babylon Block The Way”. Delivering undiluted observations over a riddim block detonating with Al’s bass and drum pulses. He injects some Upsetter levels and this is a sure Fyah connection with no objection. Stevie SOtunes is masterclass on “Burn Fire”. Stevie delivers more bass bliss with Jim Lawley’s tasty licks and takes the listener on a sky high excursion with Heartical vocals that are soulful and ethereal. Al mixes this vibe with the vision of a master craftsman. Truly unique song! The album closes with Christiano’s “Babylon Try To Hold I Down”. An incredible song that exudes the essence of King’s Music in Rightful character. Once again, the listener is taken back to the early ’80s in fine style. This powerful track is polished with an excitable Dub workout that flourishes and nourishes.

The Breadwinners – By The Sweat Of Your Brow is testament that propels the livity of what Reggae Music is. Al Redfern links with some bonafide talent here and allows each artist to shine brightly. His riddims and mixing theory is a skill set that is respected across Creation. An essential album for those who embrace real authentic sounds. Go deh!!

Conclusion The Breadwinners - By The Sweat Of Your Brow is a stunning album that brims with authority and accordance.