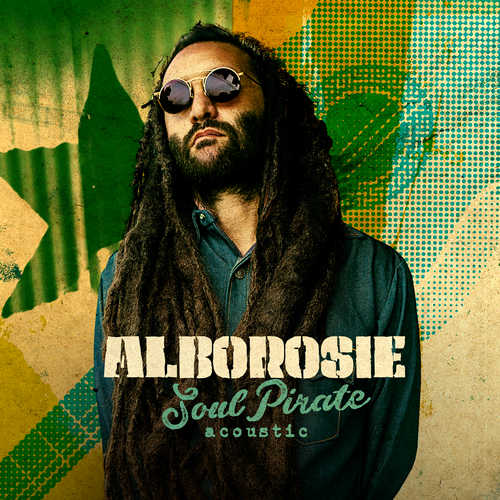 DVD From The Studio

“Soul Pirate Acoustic” starts off with an amazing heart touching version of “Diversity”, a compelling prayer to his spiritual guide Haile Selassie. Although “Herbalist” is one of those tunes you’ve probably heard a thousand times, it’s even in an acoustic setting still a pleasure to hear this anthem, which back in 2006 was banned on Jamaican radio by the authorities for glorifying ganja. “Black Woman” sees Alborosie giving praises to the ’empress’, while also the great acoustic version of the popular song “Police” (Alborosie’s speech to the police officer) still reminds of Black Uhuru’s classic tune “Guess Who’s Coming To Dinner”. Next comes the impressive “Still Blazing”, followed by sublime versions of the hit tunes “Kingston Town” (with its infectious ‘skibbelly, dum dum, skibbelly dum dum’ hook) and “Rastafari Anthem”. Then we’re treated to the awesome “Kingdom Of Zion”, a intriguing track with dubbed up samples of Barry Brown’s ‘If you a wicked man you cannot enter the kingdom of Zion’ and an haunting atmosphere. Things are nicely rounded off with “Johnny B. Good”.

The CD is accompanied by a DVD entitled “From The Studio”, which focuses on the records in Jamaica and some very intimate interviews with Alborosie.

Conclusion A well done and worthy acoustic project from Alborosie.