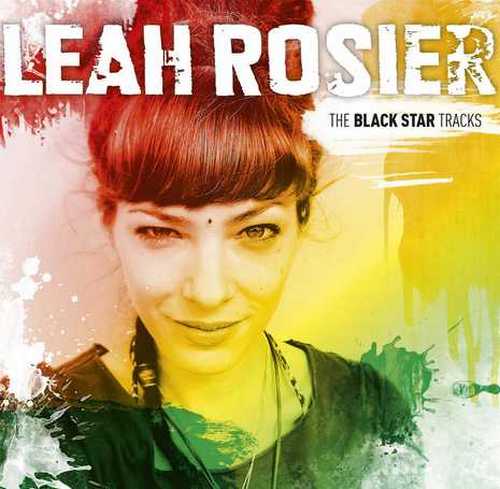 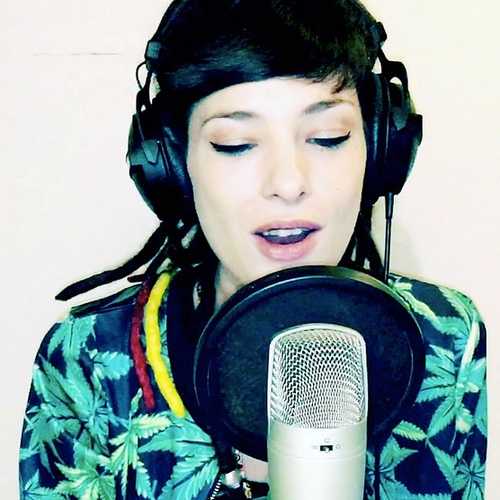 Hard work, determination and consistency… three of many elements to make an impact in the ever shifting Reggae arena. Amsterdam based LEAH ROSIER possesses these attributes and so much more. The culmination of her experience and dedication is front and centre on her third album “THE BLACK STAR TRACKS”. Superb project riding Amsterdam-Kingston connection train…. Leah was born and raised in Amsterdam, with a love of Reggae from an early stage. A 2005 modeling trip to JA cemented her respect of King’s Music. By 2010, the pure talent was singing, composing and performing full time. A crucial collaboration with Marlon Asher – “Amsterdam” – raised awareness of her talent.

Her debut “High Paw” (2012) was impressive. She followed up with “Only Irie Vibes” (2015); received with great acclaim throughout Europe. Her resume is remarkable indeed. Appearances at Rototom, Sun Ska Festival, Reggae Central XL (with Two Roots Band (NL); longtime riddim section who has backed her in studio and on stage since 2011, along with France’s Rise & Shine Band). Opening up for Israel Vibration, Ziggy Marley, Groundation, Etana and many more. On her 2015 JA trip, she performed with King Yellowman and ignited the MASSIVE across the Isle of Springs. Leah is consistently touring Europe and has the caliber to take it to the international arena. Future is bright for this hardworking Empress.

A discussion of BLACK STAR FOUNDATION is elementary. The Amsterdam based non-profit organization has focused on promoting, managing and spreading top grade artists and movements outta Holland for almost 15 years now. Founder Michelle Boekhout Van Solinge and Dennis Van Tetering are consistently forwarding the progression of Reggae on so many levels. Development of rising talent, hosting big events and traveling with Black Star Sound System from Europe to Jamaica. They created their own label in 2007; a move to showcase artistes in a big way. Talking about “Black Star Presents Vivian Jones”, a series of killer riddim projects and the very recent “Exile DI Brave Meets Black Star” and Asher-E -“Black Star Melodies”. Asher E is the longtime producer/engineer/musician whose elevated the movements for years. Refreshing to see such a committed organization cultivating with the Rightful mindset to keep the integrity of King’s Music intact.

This album is a perfect balance of the Amsterdam-Kingston connection. The complete riddims are courtesy of The Firehouse Crew; solid connectivity with Leah and Black Star from previous journeys to JA. The legendary riddim section comprised of George Miller (drums), Paul “Wrongmove” Crosdale (guitar, keys) and Donald Dennis/Danny Axeman are taut as ever. Additional contributions from Holland are on the levels. Asher-E (Eelco Kastermans) provides his mastery throughout. The humble veteran TUFF LION is royal on bass/guitar. Leah is an accomplished musician and licks crucial guitar on “Smile Vibe High”. The horn section is top ranking! Carron McGibbon (Jamaica All Stars, Ishmel McAnuff, Alpha Boys School alumni) -trumpet. Simon De Zwaan-sax, along with Guido van de Wijdeven (Beatbusters, Vince Irie) -trumpet and Dorothee Meyer -violin. Asher-E mixed and produced the album with the master touch.

“No Puppets” opens up the album in fine style. Riding a tight Asher-E riddim with tasty sax and trumpet by Simon and Guido, Leah is full control. A powerful delivery that’s lyrically potent. Versatility showing, she sings with confidence and injects a refreshing flow akin to Rufi-Ann (solid JA Empress). Leah has risen from strength to strength, this is a mature anthem. “Smile Vibe High” is riddim anchored by FireHouse Crew and Leah’s guitar. Lyrics to riddim flow all the way. A track of positivity that Leah takes to the heights. She has an original approach that reflects her true passion for the music. Good arrangements and confidence on the mic in accordance with FireHouse frequency.

“Make It Burn” is a burning chalwa anthem. An ambassador of the benefits of the perfume of Mt. Zion; it’s a plausible and concrete track with a hugely viewed video. Asher-E, Simon and Guido build a superb riddim (tuff bass!) that Leah rides skillfully. “We should set it free for the benefit of many (women, children and men)”. Sweet and sincere delivery that requires heavy stereo. “Not Cursed” shows the rising versatility of this talent. Asher-E is one gifted musician! The riddim is a melodica rich skanker that fires sky high. A soulful and Heartical atmosphere with Leah rallying around JAH’s infinite Love. Standout selection!! The energy continues with “Babylon Burning”. This is Roots anthem galore with Rightful poise in her delivery. The essence of her vocal range is on full display here -“say now you read it in the bible about the lamb and the beast”. Leah is well capable of solid Roots, Dancehall and sweet Lover’s all the while.

“Rude Boy” first surfaced on Black Star’s “Lovely Girl” riddim set (2015). This energetic bubbler is elevated by the mastery of Tuff Lion and horns by Out Of Many. A lively flow that satisfies to the maximum. The listener can hear the joy and passion in her voice from start to finish. The mix of her ethereal backing vox is in all the right places. Boomshot! “Realize” is fueled by Firehouse Crew and majestic horn section arrangements. A Ska soaked gem that focuses on the virtues on bud, leaf and stem. Fulljoyment throughout with a bin shaking quality. High grade track! “Let Love” is featured on the brand new “World Of Righteousness Riddim” album that was released the same day as Leah’s album. This is a sizzling hot number. The riddim detonates with Eelco’s thumping bass and bubbling. Dorothee’s violin adds Ites dimension all the way. Leah commands this track like a veteran artist. With Royal truth, she delivers a triumphant song that fires on all levels. Instant rewinder!

The final tracks are highlights from previous Black Star albums. “Come Rain Come Shine” (Rub A Riddim/2013) is a buoyant Dancehall outing that’s intoxicatingly great from start to finish. This is an Empress who has captured the Royal vibrations; all day every day. Upstanding arrangements and frequency. “Butterflies” (Bad Girls Riddim/2012) flies high. An energetic Love song that’s injected with some serious Dancehall and original singjay style. Leah can hold her own with the best. Her blessed backing vox are Zion caliber. The listener is treated to “Rude Dub”. Asher-E’s grasp of original Dub theory is front and centre. Detonating horn blasts and Tuff Lion’s Lion paw guitar and bass work anchors tight. This Dub is a must!

LEAH ROSIER’s “THE BLACK STAR TRACKS” is a complete and versatile affair that won’t disappoint. There’s a Joyful energy from start to finish; refreshing to Heart and Soul. A crisp, engaging and mature affair that brings out the pure artistry of this Royal talent rising. All in all, this album has the elements needed for universal appeal. Go deh!