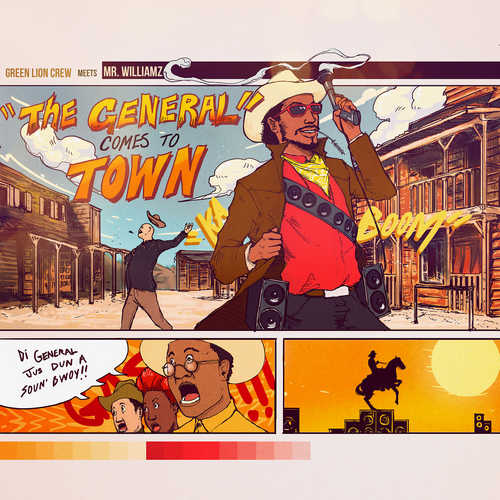 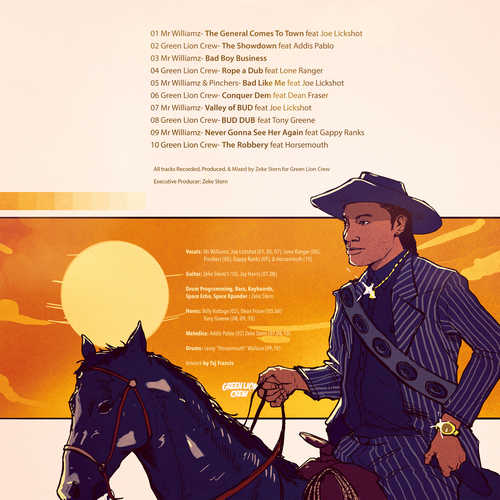 Founded in 2000 by Zeke Stern and Dana Knowles, Green Lion has evolved into an international force in music production, promotion and performance. At the controls of a potent dancefloor experience that draws from reggae dancehall, hip hop and the synthy beats of urban electro, producer/DJ Green Lion is a sonic craftsman at home both on the decks and in the studio. Honed in the heated atmosphere of Jamaican sound system culture and a constant schedule of live club and concert dates in the Us, all Green Lion productions – on record, over the air or live and direct – are energetic affairs designed to set bodies in motion. Green Lion’s movements are coming fast and furious now as charting success and critical acclaim for recent productions with reggae and crossover tastemakers such Chronixx, Kabaka Pyramid, Beenie Man, Mr. Williamz and Collie Buddz lock in #1 spots on international sales charts and heavy rotation on commercial radio around the world.

Micah Williams aka Mr. Williamz’ first ever live stage performance was at the tender age of 8 on the local sound system in his community. It was a clash (lyrical competition) of which he was crowned winner and this inspired him to begin writing lyrics. At age 16 he and his younger brother began setting up a small sound system, recording specials onto tape/cassette and then getting them cut onto steelplates creating their own dubplates.

Mr. Williamz emerged onto the reggae scene in 2008 with his debut single “Babylon in Helicopter” (produced by Necessary Mayhem) which did very well in the reggae charts in the US, Germany and the UK. This led to Mr. Williamz being honored by the BBC as the UK artiste of the year 2008. He has since released follow up singles such as “No Cigarette” which features on “The Biggest Reggae Anthems 2009” (Greensleeves) and “Real General” which reached No 1 in Japan’s singles charts only weeks after being released. Other tracks include “Better Meds” with Tony Curtis and “London”, both on the “JAM1” riddim and getting good rotation worldwide. For close to a decade, Mr. Williamz has been a staple of the international reggae scene.

The 10-track album “The General Comes To Town” is the result of the fruitful collaboration between Maine-based DJ and producer Zeke Stern and London-based vocalist Mr. Williamz. The project is heavily inspired by the rub-a-dub LPs of the early 1980s and their Spaghetti Western style cover art. The latter can’t be overlooked as it comes to full expression in the beautifully done front & back cover of this album, while the rub-a-dub style is instantly recognized when, after Joe Lickshot’s intro, the riddim of the first track leaps off your speakers.

The concept of the aptly titled “The General Comes To Town”, is Mr. Williamz and Zeke Stern trading tracks back and forth. Mr. Williamz performs on the odd-numbered tracks on the album, while on the even tracks Zeke Stern answers each with a ‘b-side’, which is either an experimental dub remix or a counteraction of another vocalist. All in all a great idea that makes this set even more entertaining and interesting.

Mr. Williamz not only fully displays his distinct vocal style and lyrical skills, he also seemingly effortless rides the awesome sounding backdrops, which are real heavy hitters. The album opener, “The General Comes To Town”, immediately makes clear that Mr. Wlliamz takes no prisoners. Underpinned by a relicked version of Ini Kamoze’s “World A Reggae”, the title track is a truly outstanding offering… a real killer! It’s perfectly followed up by “The Showdown” with Addis Pablo’s melodica play doing the trick on this haunting dubbed up version. Both “Bad Boy Business” and Green Lion Crew & Lone Ranger’s “Rope A Dub” are solid pieces worth hearing, but then it’s “Bad Like Me”, the wicked collaboration with ‘bandelero’ Pinchers that really strikes a chord.

Next comes “Valley Of BUD”, a decent ganja tune introduced by Joe Lickshot in his inimitable style. The infectious combination tune “Never See Her Again”, with guest vocalist Gappy Ranks, has a totally different vibe than its predecessors. However, together with its version “The Robbery”, which features an introduction by veteran drummer Horsemouth of ‘Rockers’ fame and incorporates a wobbling bass, “Never See Her Again” is another highlight on this totally satisfying album.

Artwork for the Spaghetti Western style cover has been done by Jamaican digital and visual artist Taj Francis.