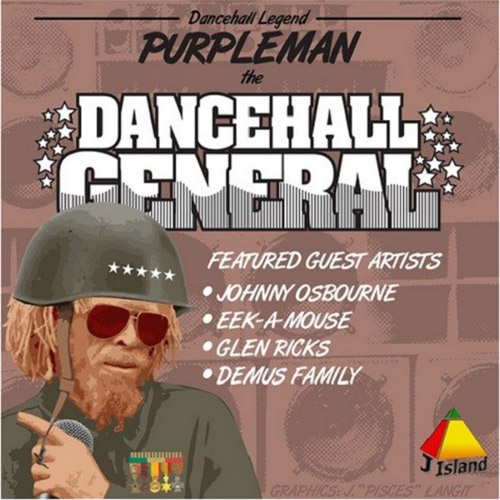 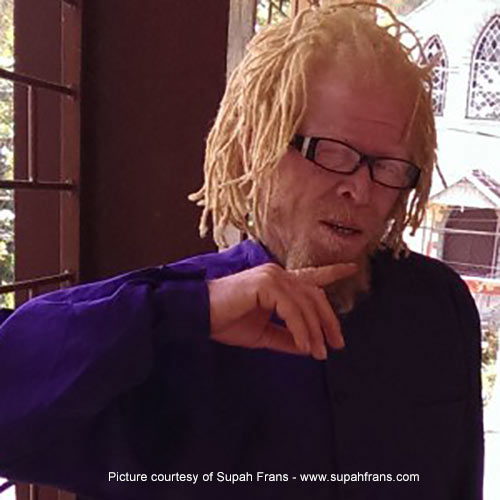 The dawn of the 1980’s was a time when the dances were changing. Dancehall vibes in Kingston were sizzling hot and a seemingly endless list of artists were sharpening their sound. True veteran PURPLEMAN was right there; releasing crucial albums and mashing up the dance. After the success of the recent “Home Once More” (his first album in 30 years); he’s come forth with “THE DANCEHALL GENERAL”. One solid excursion that delivers all the way. Biiim!!

Purpleman (Peter Jones) was born and raised in Waterhouse, Kingston in 1962. Standing firm, he’s one of three albino Dj’s to make solid impact. The other two are King Yellowman and King Mellow Yellow. Peter’s first cut “A Fe We Jah” (1979) established himself as an artist to be reckoned with. The early ’80’s saw a slew of killer albums. Notably, his debut “Hot” (1982), “DJ Confrontation” w/U Brown, “Purpleman Saves Papa Tullo In A Dancehall” (Vista,1983) and the essential “The Yellow, The Purple & The Nancy” (1982; picked up by Greensleeves and giving him international exposure). He quickly became prominent on King Jammy’s sound system. “Shock Of The Century” (1985) was a pivotal moment in Dancehall history! The four Sound clash (Jammy’s-Purpleman, Nicodemus, Papa Tulllo), Youth Promotion, Kilimanjaro and Scorpio rings so true. Purpleman mashed it up and Jammy’s took the title. This was also the first time Tenor Saw (Youth Promotion) peeled off “Ring The Alarm”. Not officially recognized, this event was the initial “Sting”. Since then, Mr. Jones has released some crucial singles. Fast forward to 2014 and he releases “Home Once More”; an engaging album sparking renewed interest. The veteran is front and centre again; with a successful tour in Brazil and an extensive tour of California slated for next month. A humble and enduring talent deserving of the rekindling of his career.

Dancehall tight jumps outta the gate on “Identification”. The lyrical master flows heartically about early days with King Yellowman. He rides a riddim that recalls what Jammy’s was doing in the mid-late ’80s. “Ready Fe Dem” is a tight excursion with Eek A Mouse and Baby Demus. Purpleman chats with veteran essence and Mr. Hylton and Baby Demus add some ruff and tuff dimension. Three the hard way. “Sugar Baby” recalls his early works in fine style. Peter was musically linked with Papa Tullo and the connection rings true on this anthem. Lyrically potent over a pleasing riddim. “Coming In Hot” was realized at Chinna’s prosperous yard. Riding a crucial ’70s riddim, he chats with the caliber of other greats like Toyan and Ranking Trevor. Standout selection displaying his skills have not diminished. Biim! The excitement continues with “Throw Me Style”. Riding a crucial “Throw Me Corn” riddim, he’s upfront with culture lyrics and versatility. Ram dance master style! This is heavy duty and heavy stereo.

The title track is a monster anthem!! “Dancehall General” was also recorded at Chinna’s Inna De Yard in fine style! Riding Dennis Emmanuel Brown’s timeless “Don’t Wanna Be No General” riddim, Purpleman is at his best; taking the “s” off Superman’s chest! It evokes memories of the Dennis Brown/Ranking Dread cut. Fulljoyment to hear this Waterhouse veteran ruling the mic once again. The vibes are ruling on “Rub A Dub Style” w/Johnny Osbourne. Recalling prime Jammy’s days, Purpleman is in “chantjay” style and Johnny glides across with joyful energy. This is a crucial combination! “Launch An Attack” opens up with a Royal moment from the late, great Garnett Silk and Purpleman is lyrically potent alongside the talented Blakka Demus (Demus family is well represented indeed). There is pure energy here with both artists presenting pure Fyah lyrics.

“Wicked and wild and well versatile…”. “Rip Off” is a real treat. Great to hear Glen Ricks (totally gifted singer/songwriter) again! Riding a solid riddim, Peter, Glen and Eek A Mouse rally together to tell true stories of promoters ripping off artists. All three are given deserved time to deliver. Strong a strong! “Wicked Affi Run” is more musical murder. Riding “Something New” riddim (that Ernest Wilson rode so well on “I Know Myself”), Purpleman is rock solid from start to finish. A strictly conscious anthem, this is an observant and potent delivery recalling the Dj’s that paved the way before early ’80s Dancehall. Superb vibes! “Live Up” is an upliftment with style and purpose. On top of a bubbling musical backbone, Purpleman displays great vocal range and echoes positivity and livity like a true champion. One of the finest tracks he has done in quite some time.

PURPLEMAN lives up to the title “DANCEHALL GENERAL”. He displays absolute versatility over “all killer, nah filler” riddims. It’s evident that his ability has not diminished over the years. His “comeback” album was good; his new offering builds on that solid. The guest artists add crucial dimension and it’s great to see the support of the artists that he rose up with. Highly recommended project!

Conclusion Dancehall veteran PURPLEMAN is firmly committed and lyrically potent on his engaging new album "Dancehall General". A delight to hear the enduring veteran front and centre once again.