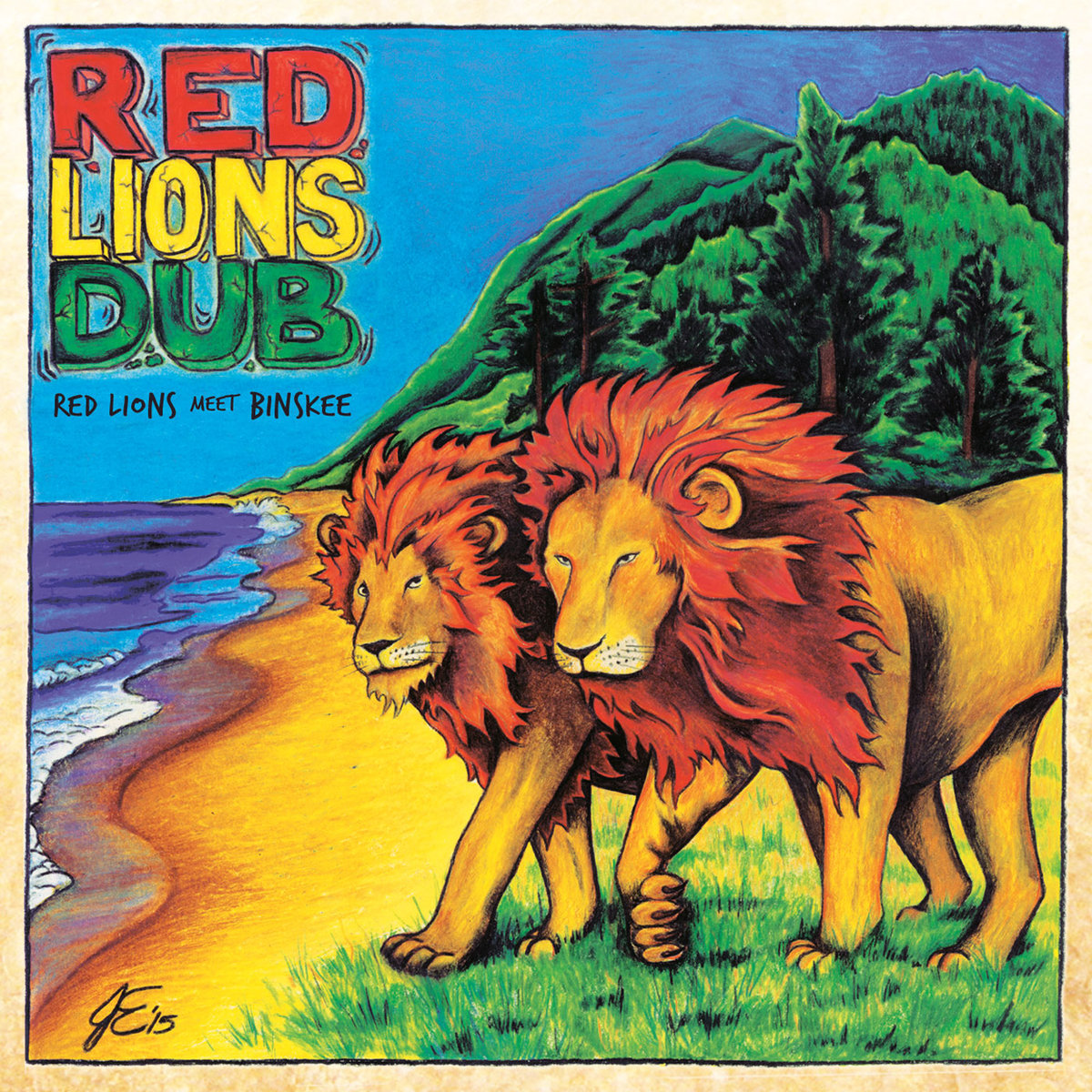 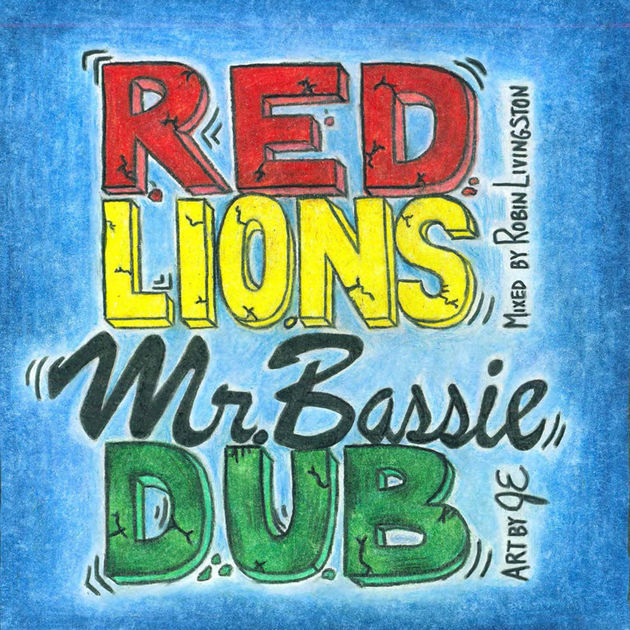 Traveling north across the Golden Gate Bridge, city vibes are erased by the absolute beauty of West Marin. Amid the green region below Mt. Tamalpais; there’s serious Roots Reggae runnings flowing and growing. RED LIONS are a Royal example of the organically committed Roots movement in Northern California. The veteran duo of Jeremy “Red Lion” Gray and Burton Eubank released “RED LIONS DUB” back in 2016. The sheer beauty and power of this album deserves international attention.

Burton Eubank has been musically active since the ’80s. Hailing from Inverness, his bass is well known throughout the region. A true ambassador of positivity; he is active in the community as a firefighter and volunteer for conscious movements. He recently joined The Bloodstones, whose massive debut, “One Day” was reviewed on our site. Burton and Jeremy have been tight for many years and the link reflects in their Royal vibrations. Currently, they are working on the vocal set of “Red Lions Dub” (featuring Mykal Rose w/additional tracks). Interesting move to release a Dub album before the vocal set, a move that Brinsley Forde and Sly & Robbie did recently with “One Fine Dub”. Keeps the spark igniting…

The duo selected premier local musicians and a top ranking engineer to create this tour-de-force. Jeremy-drums, percussion, silver flute and keys. Burton is strictly bass wise. Veteran guitarist Kevin O’Brian (Mi Gaan Band) shines bright. Champion bubbler Ryan Daisley was brought in on keys. Eduardo Gross (from IKRONIK BAND – one of the tuffest ensembles around!) brings his crucial licks. Joe Bressler (veteran with 30 years on international experience) on keys. Gidon Shikler (whose talent prompted Beres Hammond to send him to JA to record) is sky high on sax. Journeyman Dave Eagle is vibrant on percussion. Sessions were realized at I-Sight Studio. Point Reyes based Robin “Binkskee” Livingston mixed and mastered this project at The Birdhouse Studio. Robin is one masterclass engineer!! Honourable mention to Jennie Eubank, whose Rootical artwork graces the layout triumphantly.

This Dub testament is a perfect balance of original and stellar interpretations of some CLASSIC riddims. Kicks off with Horace Andy’s “Mr.Bassie” with sound power! Gidon’s sky high sax gives way to a tight revisit of the timeless riddim. Burton’s bass and Jeremy’s kicks anchor just right with spot on and refreshing arrangements that are brilliantly interwoven by Binskee. Original brush strokes on this musical tapestry. Boom! “Red Lions” is a meditative original offering. Each instrument is showcased just right; fueled by Niyabinghi vibrations and Burton’s Robbie Shakespeare caliber bass lines. The atmosphere is hypnotic in nature and sweet echo and reverb makes this a Zion high offering.

The Ites beauty continues with “Miwok”. A rousing tribute to The Miwok Indians who prospered in the majestic region before modern civilization. A bubbling riddim niced up by impeccable guitar work, Jeremy’s taut drumming and versatile contributions from all players of instruments. Red Lions keep to the Roots of the matter and offer musical ingredients that are mixed to perfection. Not too spicy, not too sweet. Each track is a meditation that grabs full attention with a humble yet fully absorbing effect. A sound all their own; a culmination of committed Roots musicians who display their extensive experience without trying to out do each other. A Zionic frequency blessed by Binskee’s unique touch at the controls.

The vibes are INCREDIBLE on “Lately”! Yes, they revisit The Naturalites (one of UK’s most cherished bands) masterpiece from their “Marvellous” album. Quite honestly, one of the most Heartfelt Dub workouts to be presented in a long time!! Gidon’s ethereal sax gives way to Zion territory. Over a totally crisp interpretation, Jeremy’s flute and drum rolls intertwine with bass thunder, ethereal bubbling and tasty guitar. Binskee adds incredible dimension with subtle yet pertinent Dub theory. A track that retains its potency after the hundredth listen. An amazing piece of JAH art!!

The urgency continues with “Mind What You Nyam”. A riddim with late ’70s potency balanced with modern tautness. Impeccable guitar, keyboard and tasty drum rolls in flow with Burton’s accomplished bass lines. The listener is taken to the lush Muir Woods (Marin Headlands) with a cool breeze courtesy of Mr. Livingston. Each track has its own Lion paw imprint ; the ace engineer injects subtle magic that complements the organic nature of this project. “Glory & Strength” is Zion Inna musical vision. A broad and booming atmosphere fueled by lilting bass, tight drums and relentlessly great riddim/lead guitar. Passed through Binskee’s house of Dub and given a crisp and cohesive treatment. Approaching Zionospheric levels. Firm musical meditation!

“Stars” is a classic riddim evoking the flawless Cornell Campbell. Red Lions revisit it with absolute manners and respect. Spot on vibes accentuated by Gidon’s powerful sax work (this man can play!!) and a taut crispness from all musicians. Standout selection. “Stepping Up” is a high stepping skanker presented with a refreshing flow like a stream that rolls out to Bolinas. Intelligent drum machine injection that galongs with sax blasts, lilting bass and Niyabinghi thunder. This is bin shaking frequency that is glory to the Sound.

“Deep Dreams” is an deep and meditative level. Layers of impeccable musicianmanship are intertwined just nice. This is a broad and original soundscape with subtle Dub tones. The listener will be drawn in deep. This ensemble captures real authentic sound with no gimmicks. Straight, no chaser. “Garden Of” is a bountiful harvest of Heartical Joy. A vibrant riddim brimming with guitar work akin to Chinna Smith and the tight riddimatic quality of The High Times Players. This is no carbon copy; a track that echoes the caliber of what veteran JA riddim sections were doing in the early ’80s before Digital took over. Killer mix with a Bunny Tom Tom power.

“Tropical Meditation” is pure brilliance! It opens up Costa Rica jungle sounds recorded by Jeremy during one of many trips to the region. Mykal Rose recently voiced “My Friend Herb” on this riddim and gives the MASSIVE an insight on upcoming Red Lions work. This is a buoyant and bubbling affair with a Bluesy guitar and textured chops from all. Full display of The masterclass riddim power of these musicians. An atmosphere that takes the listener to Ites dimension on a gentle yet compelling ride. Another standout selection.

“RED LIONS DUB” is a remarkable album on all levels. The original riddims are superb and meditative in nature. The approach to the already established musical backbones is flawless and refreshing. The vibrations are a Royal portrait of the Northern California Roots movement. Over the decades, Heartical works have been bubbling from Humboldt to San Francisco. RED LIONS have created a powerful and forward sound all their own and have the credentials to carry the vibes all points North, East, West and South. Highest recommendation! Go deh.

Conclusion "RED LIONS DUB" is a totally refreshing Roots affair that honours the essence of King's Music with original and forward vision.