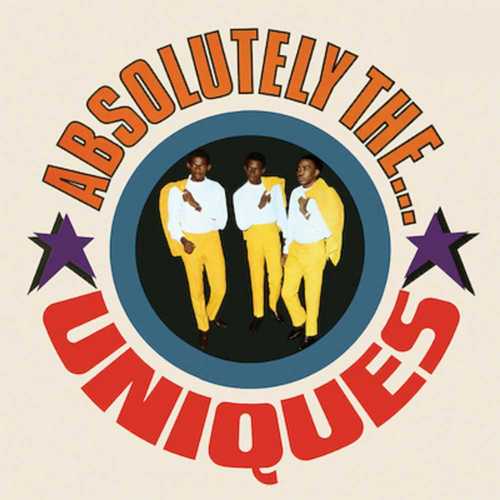 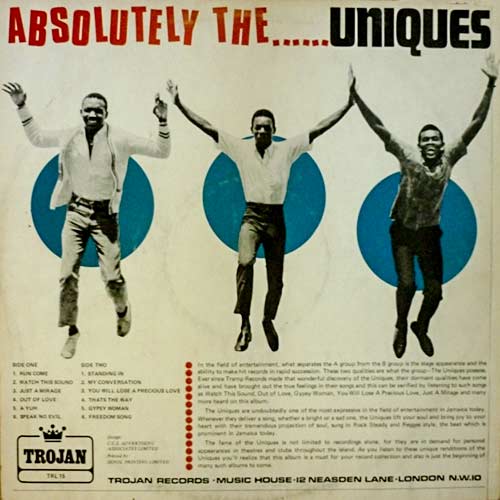 The Uniques, one of the most popular and enduring vocal harmony groups of the Rocksteady era, had various line-ups. After he had left The Techniques in 1966, Keith ‘Slim’ Smith formed his own vocal group called The Uniques, with Derrick Morgan and Ken Boothe being the other members. However this first line-up didn’t last very long and former Techniques member Franklyn White and Roy Shirley joined Slim Smith to form a new version of The Uniques. They released a few singles including the R&B influenced “Do Me Good” for Ken Lack’s Caltone imprint. Despite a promising start the group soon disbanded. With BB Seaton and Lloyd Charmers the group released “Let Me Go Girl” and “Never Let Me Go”. BB Seaton embarked on a successful career with The Gaylads and the next generation Uniques was born when Jimmy Riley was enlisted as third vocalist. The new line-up debuted with “Watch This Sound”, a cover version of Stephen Stills’ “For What It’s Worth” (a major hit for Stills’ group Buffalo Springfield), which was a hit along with a string of subsequent singles, many produced by Bunny Lee, including “My Conversation”, which Lee sold to Rupie Edwards, who used the riddim to create the first one-riddim album, “Yamaha Skank”. In the meantime the trio set up their own Tramp record label with the assistance of local businessman, Winston Lowe. Other hits followed: “Blessed Are The Meek” and “Love And Devotion”. As 1968 draw to an end the debut album “Absolutely The…Uniques” was released. The LP collected their most successful singles and was released in the UK on the Trojan label.

Slim Smith and Lloyd Charmers were enjoying significant success with solo works and by the spring of 1969 the group broke up and all three vocalists continued to make significant contributions to Jamaican popular music. On the night of October 9th 1972 the incomparable singer Slim Smith, who had a great impact on Jamaican music, tragically died. The group name was briefly revived by Jimmy Riley and Cornell Campbell in 1977 for the album “Give Thanks”, and again in 1997 with Al Campbell joining Cornell Campbell and Jimmy Riley on the album “The Uniques”. Lloyd Charmers, mainly based in the UK, became a successful vocalist and producer. He died of an heart attack in December 2012. Jimmy Riley had several hits in the 1970s, including “Tell The Youths The Truth”, “Nyah Bingi”, and “Clean up the Streets”, and continued to be successful in the 1980s, working for Sly & Robbie’s Taxi productions. In 1983, Riley topped the UK reggae chart with his version of Marvin Gaye’s “Sexual Healing”. Riley’s son Tarrus followed him into music and the success of Tarrus gave a boost to Jimmy’s career. He died on the morning of 23 March 2016 in New York from cancer, aged 68.

Doctor Bird Records, a division of Cherry Red Records, specializes in vintage Jamaican sounds licensed from the legendary catalogue of Trojan Records. Almost 50 years after its original issue, they re-present the debut album with the original 12 tracks and 12 bonus tunes coming from the group’s Tramp label. Listening to all those great tunes, hits as well as less well known pieces, that were recorded by The Uniques, it’s crystal clear that this vocal trio fully benefited from Slim Smith’s passionate, soulful voice, which had an almost manic edge. Checking the credits in the well documented booklet shows that Jimmy Riley as a composer was responsible for a lot of the group’s tunes.

Anyone who calls himself ‘reggae fan’ will certainly know and love the bulk of tunes offered here. Boom shot hits like “My Conversation”, “Follow This Sound” and “Love And Devotion” are interspersed with soulful re-interpretations of Motown pieces such as “That’s The Way (Love Is)”, “You’ll Lose A Precious Love” and “I’m Going To make You Love Me”‘. The soul hits by Curtis Mayfield were extremely popular on the island and The Uniques released some splendid cover versions: “Gypsy Woman” and the aforementioned “My Woman’s Love”, the latter was recut by Jimmy Riley in the early 1980s for Sly & Robbie’s Taxi imprint. The list of musicians is an impressive who’s who of Jamaica’s top talents of that time: Hux Brown, Winston Grennan, Family Man, Joe Isaacs, Bobby Aitken, Alva Lewis, Carlie Barrett, Glen Adams, Winston Wright, Val Bennett, Lester Sterling and Vin Gordon.

Conclusion This set is a truly outstanding historical collection, satisfaction guaranteed, so make sure you purchase this album!