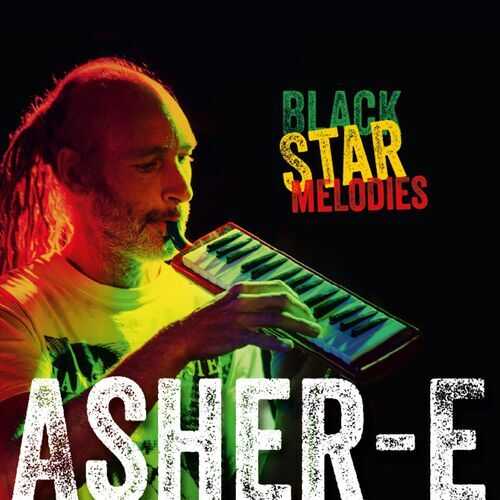 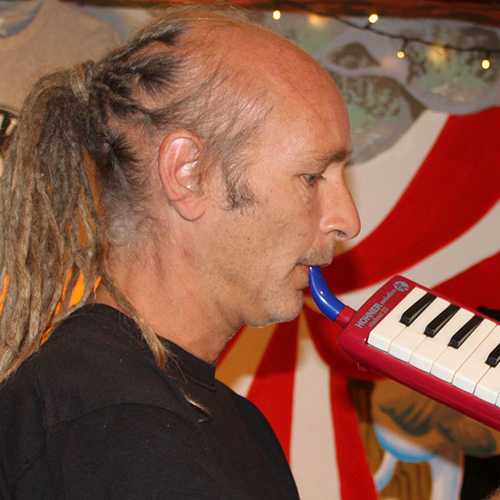 Black Star Foundation producer, multi-instrumentalist and sound-engineer Eelco Kastermans p.k.a. ASHER-E, has finally released a solo-album. His Royal grasp of musicianship and engineering has beckoned a solo venture for years now. And that has been achieved with this brilliant solo melodica album! As the virtues of Black Star Foundation and their recent releases have been extensively covered in the reviews of their “World Of Righteousness Riddim”-selection and Leah Rosier’s third album “The Black Star Tracks”, this review shall solely focus on Asher-E’s tour-de-force “BLACK STAR MELODIES”.

For every reggae-listener it has become impossible to listen to any reggae/dub-album featuring the melodica as main instrument without comparing it to the classic albums and tunes by the legendary late Augustus Pablo, mixed often by the even greater dub legend (unfortunately murdered) King Tubby. Augustus Pablo unfortunately has been an inspiration for a lot of epigonists and either bad producers or bad riddim-builders or bad multi-instrumentalists. I challenge everyone reading this to listen from first to last note to melodica reggae albums by the likes of MelloMarque’ or Tony Rankin and you’ll fully agree with that last sentence.

To review a melodica reggae album without comparing it to the seminal Rockers productions by Augustus Pablo however is equally impossible. Probably one of very few albums that didn’t suffer from the comparison has been the different sounding (strangely enough taking into account the artist’s name) 1984 Adrian Sherwood produced On-U Sound album by Dr. Pablo & Dub Syndicate. Titled “North Of The River Thames” with a tongue-in-cheek reference to Augustus Pablo’s “East Of The River Nile”, it is proof that once the melodica player is indeed a strong multi-instrumenalist, the producer a great dub mixer & producer and the riddims (on that album courtesy of a.o. Eskimo Fox and Roots Radics’ Style Scott on drums and George Oban and Lizard on bass) strong and well played, an extremely entertaining melodica reggae album can be recorded.

And that is exactly in which ASHER-E succeeded, as “BLACK STAR MELODIES” is a highly entertaining melodica reggae album that easily leaves behind “North Of The River Thames” in terms of overall quality of the tracks as well as where pure listening pleasure is concerned. To understand why it is necessary to bring Augustus Pablo back in the equation again as I will do near the end of this review. And realize that obviously Dr. Pablo wasn’t a producer in his own right as Augustus Pablo was and ASHER-E is and hopefully will be for many more years. The true essence of Dub theory is on full display here. “BLACK STAR MELODIES” is an album that fires on all cylinders.

The album opens with the excellent title track “Black Star Melodies” introduced by Exile Di Brave (who just released the EP “Meets Black Star” on Black Star Foundation), showcasing through the killer bassline that grabs you as soon as it starts rolling the instrument ASHER-E originally considered his main instrument, followed by the equally strong U-Roy introduced dubbed up “Control Tower” and after “King Selassie I We Praise” we get the brilliant melodica dub reworking of Robina Souilljee’s “Don’t Judge” on the ‘World Of Righteousness’-riddim. Despite the Outernational star studded line-up on it, the standout track on the riddim, with only Rapha Pico’s “No Escape” coming close.

The second half of the album kicks off with “On A Mission”, the melodica dub version of Exile Di Brave’s “Never Get Weary” and its straight dub “Never Get Dubbed Yet”, its strong riddim to full effect used earlier on Black Star Foundation productions for Leah Rosier (“Not Cursed”) and Brainpower (“De Vierde Kaart Dub”). Then on “It Ain’t Right” the rolling bassline immediately jumps out of the mix for full aural satisfaction, before the album finishes with the two strongest tracks on what already is a great album without these two scorchers.

Dub Up And Overdub

“All My Life” is the melodica take on Vivian Jones’ excellent “All My Life”, already dubbed up on “Black Star Presents” and the riddim has also been voiced by Exile Di Brave alongside Taxi Red Ash for their “Spend My Money [Discomix]” and Leah Rosier for “Babylon Burning” and “If The Melodica Could Talk” is also based on an earlier magnificent Vivian Jones tune “If The Tree Could Talk” and its accompanying dub. And that is where Augustus Pablo comes back into the equation. Because “BLACK STAR MELODIES” is one of the best instrumental roots dub albums released since the heydays of Augustus Pablo. And I can only assume the plausible explanation is that ASHER-E unlike many others who delivered instrumental (melodica) albums is a great producer as well, thus having the ability to select the right vocal tunes to dub up and overdub for this album.

I can only hope, based on her strong outing on the ‘World Of Righteousness’-riddim that before a more than welcome sophomore melodica album ASHER-E will be in the driving seat for the production of a Robina Souilljee EP or even album. But till then “BLACK STAR MELODIES” will be on heavy rotation when I’m in a rootsy mood. This album simply is a must have for any Augustus Pablo and or dub aficionado!

Conclusion ASHER-E has delved into the tremendous Black Star catalogue and selected masterclass vibrations. His Zionesque touch is a testament to his infinite talent and vision. Asher-E - Black Star Melodies is one of the best instrumental roots dub albums released since the heydays of Augustus Pablo. Another superb production by ASHER-E for Black Star Foundation. A triumph indeed!