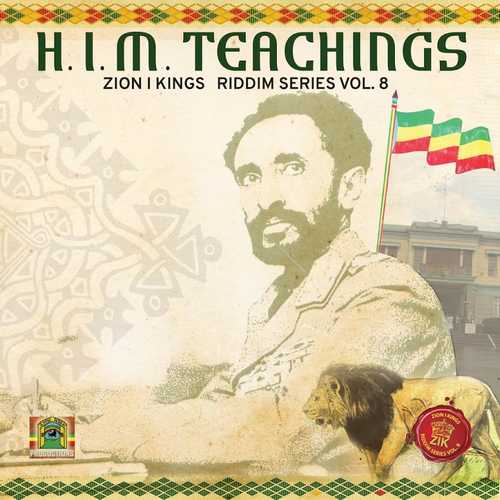 Zion High Productions, one part of the acclaimed Zion I Kings collective which furthermore consists of I Grade Records & Lustre Kings, is responsible for the recently released “H.I.M. Teachings Riddim”. The latter is the 8th volume in the wonderful Zion I Kings Riddim Series, which started in 2013 with I Grade Records’ golden “Songbird Riddim”.

So far, all of the releases in the Zion I Kings Riddim Series have been top notch projects and “H.I.M. Teachings Riddim” proves itself to be no exception. Pressure Busspipe, who absolutely shines whenever he voices a cut for the Zion I Kings collective, delivers the sterling sufferers piece “Uncomfortable”. The well respected Lloyd Brown comes up with “Musical Warrior”, a very good and entertaining song with nice vibes. It’s followed by Lutan Fyah’s “Test A Money”. Had to play this one several times to get a good feeling about this message tune. Amani Seearasta leaves a decent impression with “New Eduction”, while Marlon Asher delivers his goods in deadly style & fashion.

Recordings from the high prolific Akea Beka (previously known as Midnite and Vaughn Benjamin) for Zion High Productions and I Grade Records are always stamped with quality all over and this also goes for the compelling “Chieftess Of Spices”. With his remarkable “Tru Da Fyah” album, Arkaingelle showed that he’s an artist who deserves to be heard. This is affirmed by “Chubble”, one of the highlights on this set. Also pay attention to the passionate, militant and energetic Jahbar I, son of George “Dusty” Miller who is a great producer of music and the drummer in the Firehouse Crew. His “Powaz Of Luv” is a solid message tune worth hearing. “H.I.M. Teachings Version” rounds off this collection of tunes in Royal style.

Conclusion "H.I.M. Teachings Riddim" is another winner in the Zion I Kings Riddim series.