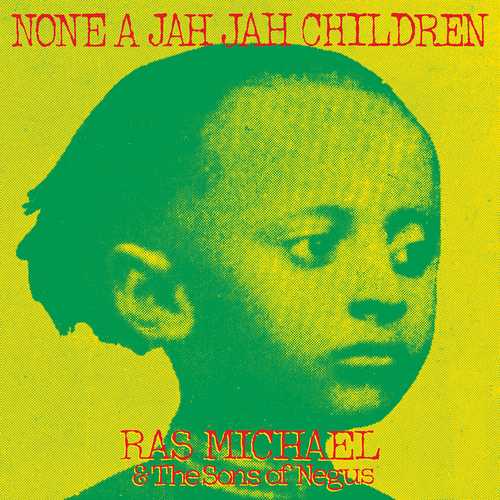 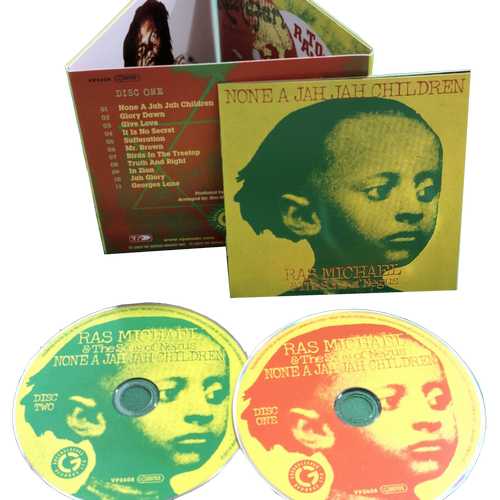 It’s such a pleasure to see that more and more classic reggae stuff gets re-released in a decent manner. At the end of January we received an eye-catching digipack on our desks featuring two classic sets from Ras Michael & The Sons Of Negus, both Tommy Cowan productions. This 2 discs reissue combines the 1975 “Rastafari” set and the 1977 album “Kibir-Am-Lak”.

Michael George Henry, better known as Ras Michael, was born in 1943 and raised in the rasta community at St. Mary’s, Jamaica. At a young age he mastered the traditional art of hand-drumming and in the mid 60s he formed The Sons Of Negus Churchical Host, a group of singers and drummers chosen from among his fellow brethren. After regularly performing at Rasta gatherings (also called grounations) he financed a number of recordings such as “Lion of Judah”, “Ethiopian National Anthem” and “Salvation”, which he issued on his own Zion Disc label. Around 1966 he was invited to perform -in exchange of studio time- with Jackie Mittoo and The Soul Vendors on sides such as “Drum Song” and “A Darker Shade Of Black”, issued by producer Coxsone Dodd. He was the first member of the Rastafari movement to have a reggae radio program in Jamaica: ‘The Lion of Judah Time’ program first aired in 1967 on JBC.

The impact of Rastafarianism on the mainstream Jamaican music remained nominal, with major producers obstinate in their belief that the music by groups such as The Sons Of Negus lacked commercial potential. However, in 1974 producer Lloyd Charmers invited them to Federal Studios to record an album’s worth of material. Supported by an amalgam of leading session players, the cut four (!) extended tracks, using traditional Rasta chant as its basic, but mixed with the sounds of reggae, pop and funk. The album, entitled “Dadawah – Peace & Love” brought the group under the attention of Tommy Cowan. This set differed greatly from their previous album, presenting the group without additional accompaniment, including bassist Robbie Shakespeare, guitarist Earl “Chinna” Smith, keyboard player Robbie Lyn, and additional guitar from Peter Tosh. The album “Rastafari” is a spell-binding collection of work, which established the group as major recording artists in Jamaica. In 1977 Tommy Cowan released the album “Kibir-Am-Lak” (Glory To God), which increased the popularity of the group in Europe and the United States.

Ras Michael contributed to recording sessions at Lee ‘Scratch’ Perry’s Black Ark studio (including sessions with Bob Marley), and he performed with Marley at the One Love Peace Concert in Jamaica in 1978. With the Sons of Negus he recorded an album (Love Thy Neighbor) with Perry at the Black Ark. Ras Michael has recorded 26 albums over the span of his career. He has received much international recognition for both his musical and spiritual contributions. Ras Michael continues to tour internationally and spreads his positive message by letting his love light shine on music listeners all over the world.

Enveloped by a most attractive sleeve (the picture is of Haile Sellassie as a child) the “Rastafari” album offers more professional entertainment than his previous works, but is spiritually just as convincing. It is a stimulating album for the rich effortless textures of music woven by rhythm experts, moody musicians. An album pervaded by a wholesome, spiritual feeling, a feeling of togetherness led by singer Ras Michael. His voice isn`t likely to become a model of influence and inspiration but it serves its purpose well. “On Broadway” (changed from “In Zion” on the JA copy) is a remake of the Drifters` song with new lyrics. It`s the most complete number, a flowing refreshing sound where horns, lead guitar, and synthesizer paint beautiful layers of melodic music, and Tosh`s inimitable wah wah guitar appears mysteriously near the closure of the tune.

“Glory Dawn” and “It Is No Secret” are hymn-like numbers while “Birds In The Treetop” borrows from a traditional JA folk song, “Mr Brown” is ironic and witty (“how could a black man name Mr Brown…”), while “Truth And Right” and “Sufferation” are close in theme and texture to “None A Jah Jah Children”. Bonus tunes included are “Jah Glory”, the dub of “None A Jah Jah Children” and “Georges Lane”, a tune that previously appeared on the “New Name” album.

The second disc carries the 1977 “Kibir-Am-Lak” album. The album opens with the churchical hymn chant of “A New Name Jah Got”, with its piano intro and eerie phased guitar. Robbie Shakespeare’s bass is a huge underpinning boom, grounding the tune and merging with thudding Binghi drums. “If You Only Knew” is a more calming chant, but again, is clearly derived from hymnal form and structure. The heaviest, most aggressive track here is the aural purge of “Babylon (Super Bomb)”, with its lyric about Jah conspiring to bomb the world in vengeance for man’s corruption. At times, Nyabinghi drumming can sound lethargic and soporific, but this work is energetic, inspired and inventive, a complex undertow of taut sound.

“Booma Yeah” is partially chanted in Amharic. The opening blessing from Ras Michael is a recital and a meditation, reminding the listener of the origin of the drum in Africa. That heartbeat he reminds, is echoed in The Sons of Negus. After the orthodox opening, this track veers into Hamilton Bohannon / Tony Allen afro funk — it works beautifully, with Shakespeare’s agile bass and the taut Binghi percussion. It sounds similar to Hamilton Bohannon’s long deleted 45 “South African Man” with it’s hypnotic keyboard and drum structure. “Over the Mountain” speaks of nature as a holy place of Jah spirit. Here also some bonus tracks, three dubs. “Chant Out The Wicked” is the dub companion to “Mr. Wicked Man”, “A New Dub” dubs up “A New Name Jah Got” and there’s “No Hoppers Version”.