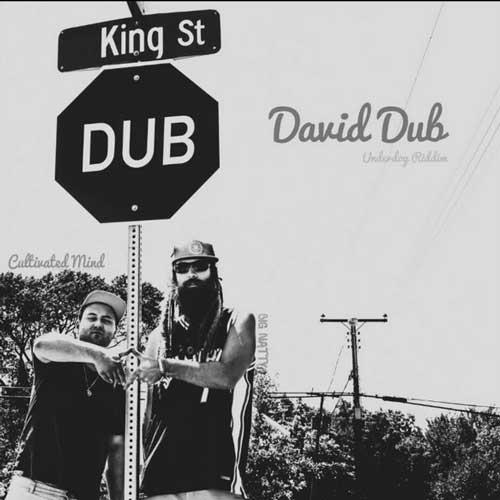 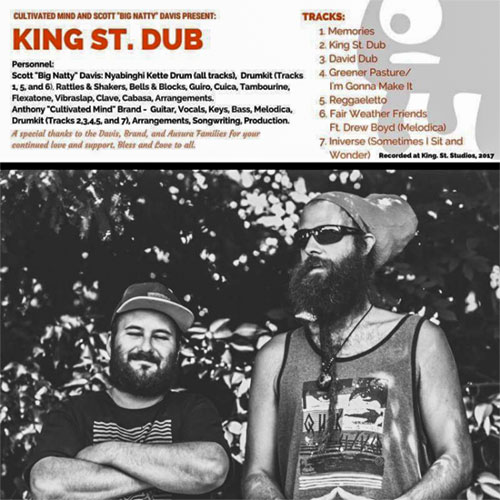 Nino Brand’s imprint on Virginia Roots is Lion vision. Alongside Drew Boyd, he formed the enormously successful Cultivated Mind in 2013. Winner of 2016 Virginia Reggae Award for “new artist”, their debut album “Tend The Garden” was a contender for the esteemed Reggaeville’s “Album Of The Year” for 2017. Solid works indeed! Consistently touring locally with a textured set list, Nino and crew amazed this reviewer at Chesapeake Bay Reggae Festival (Hampton, Va) with masterclass ability. The future is bright for this rising singer/musician/producer who creates Royal works at his King St. Studio (also located in Hampton).

The solid link between Nino and Scott can be traced back to Big Natty’s kette tones on “David” (track from “Tend The Garden”). The inspiration for this powerful new project started right there. Scott is a bonafide veteran with over 15 years of live and studio work. A Rootsman whose left a Lion imprint from West to East Coast and all points between. Classically trained in music theory, his mastery in drumming and percussion is flawless. He taught at a Virginia music academy for 6 years; educating the youth right. Scott has performed hundreds of shows across the country; fluent in many genres. His Roots credentials are deep and true. From 2004-10, his percussion elevated the historic Prisoners. He stepped wise with Session Rockers and spun platter weekly as Kingdom Sound. Currently living near Grass Valley, California; his Royal vibes can be found on classics by Ras Biblical, Army, Abja and Danny I. From 2012-3, he toured with Lions Of Kush Band throughout Northern California. The upcoming “Everlasting Doors” album (Intrinity Records) will feature his Heartical tones. Roots ambassador for sure.

“KING ST.DUB” exudes a complete sound from the dynamic duo. Anthony is a skilled journeyman of numerous instruments. He handles vocals, bass, guitar, keys, melodica and the majority of drums. This project showcases his rising skills as songwriter, producer and engineer. Big Natty came into the studio with a plethora of percussive frequency. He contributed his taut drum theory on three tracks. His percussion kit is “inicredible”. His Kette drum is omnipresent on all tracks. He plays guiro, cuica, tambourine, blocks and shakers, flexatone, vibraslap, clave and cabasa. Observing this Rootsman on stage; he’s completely at ease with these organic instruments and exudes Zion tones all the while.

“Memories” ignites from the first note. Nino’s bass and Scott’s drums anchor this instantly engaging anthem. “Reminiscing is the old fashioned remedy.” A Hearty delivery from Nino about remembrance of days of past. The influx of Scott’s Niyabinghi tones mesh just right with Nino’s spot on licks, bubbling and original Dub thinking at the mix board. This track is absolutely Reggae Radio ready. Boom! The title track clicks on many levels. Cultivated Mind flexes in Jazz tones in their sound and Nino’s licks reflect that nicely. Sparse yet powerful vocals float above a textured riddim detonating with heavy bass and Mystic melodica. Scott’s percussive levels are infinite; a groundation essence is reflected with his numerous instrumentation. The atmosphere is Dubbed with original theory; a Rootical odyssey that flows.

“David Dub” is a Zion high pillar of musical strength. Nino cradling the musicianmanship like a champion. This is a Royal excursion of the brilliant “David” from “Tend The Garden”. This track was rearranged to give more focus to Scott’s sound. Nino’s ancient future lyrics are ethereal amongst the Roots and branches. Scott’s kette and choice of percussion offers a humble yet pulsating presence. In accordance with Foundation percussionists, his experience and vision is the buoyancy of these urgent levels. The listener steps into unpolluted Dub country here.

The vibrations are fertile on “Greener Pasture/I’m Gonna Make It.” A Jazz/big band sound introduces this broad track of positivism. Despite “I’m like Atlas with the world on my shoulders”, Nino delivers inspiration for one and ones to reach higher heights despite any obstacle. Totally engaging scat and chant style brimming with originality. The pulsing riddim is flecked with crucial guitar (possibly influenced from his days with “Dos Maestros”) and lilting bass and drum work. Once more, Scott offers Earth tones with pulsing Kette and a well rounded dish of percussion otherwise. A superb track with a live version included on Cultivated Mind’s “Inna Digital Style” ep.

“Reggaeletto” features Scott on drums and percussion. Lyrics to riddim tight! Nino delivers undiluted truth over the taut riddim. Drum and bass wise complemented with vivid licks. Scott’s Kette is rolling thunder coming down from Kilimanjaro with organic mastery from his percussion kit. Flawless on the mix and Dub theory. “Fair Weather Friends” showcases these Souljah’s ability to create and arrange a tight anthem. Dash in the melodica of fellow veteran Drew Boyd and this is a standout rewinda! Big Natty’s drum patterns intertwines just nice with Nino’s Roots and Blues instrumentation. Drew’s melodica drifts like an Ital breeze. This is a Roots symphony all the way! Nino offers up truthful lyrics with conviction; arranged anthemwise. Rootsman percussion from Scott. The splendid EP closes with the tuff “Iniverse (Sometimes I Sit & Wonder)”. Nino and Scott complement one another in one perfect inity; providing an urgent musical backbone that Nino chants over-undiluted and unapologetic. This track reflects sense of purpose and strength to people across Creation.

Conclusion "KING ST.DUB" is Roots with quality. A committed project that delivers an original and engaging sound. A reflection of unwavering commitment and an "inisight" of the Heartical works from U.S East Coast massive. Highest recommendation! Go deh!