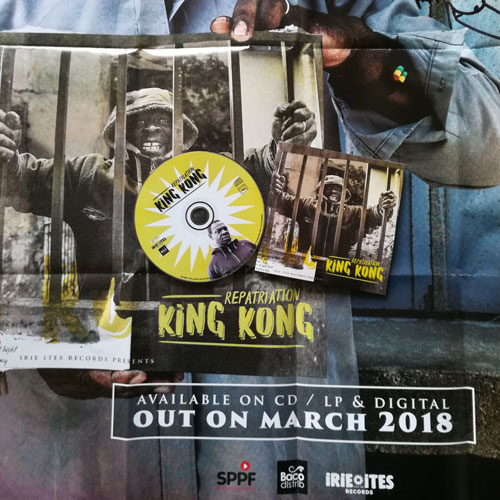 “Trouble again… the world is getting nervous.” Lyrics born to become a reality anthem that stands tall after 30 years. King Kong’s “Trouble Again” was just one of many works that mashed up the dance across Creation in the ’80s and ’90s. The bonafide veteran returns front and centre with “Repatriation.” Flawless levels that pay tribute to the era where he burst on the scene; delivered with fresh potency and urgency. The stamp of Irie Ites Records quality continues with infinite results…

King Kong (Dennis Thomas) stepped on the scene in 1982. A time when the dances were changing; artists like Wayne Smith, Tenor Saw, Nitty Gritty and countless others were honing their skills. His first single, “Pink Eye”, was a Tuff Gong session; going by the name Junior Kong. King Tubby observed the Youthman’s skill set and the rest is history. Initial Firehouse singles like “Step On Dem Corn” and “Babylon” created a solid stir. The Digital Era was on and the output was tremendous. 1986 was a pivotal year for Mr. Thomas. His split debut (w/Firehouse singer Anthony Red Rose) “Two Big Bull Inna One Pen” solidified his credentials. “Trouble Again” (Jammy’s) took the world by storm! Greensleeves released the album of the same name on Nov, 10 and the global recognition was elevated. He worked for a plethora of producers; Bunny Lee, Prince Jazzbo, Errol Thompson and many more. “Dancehall Session” (Striker Lee) and “Musical Confrontation” (Jammy’s) closed out this prolific year. The albums and singles continued with absolute consistency.

By the end of the ’80s, King Kong moved to the US and formed Conscious Music label. He released the Tenor Saw tribute, “He Was A Friend” in 1989 with big impact. Another move to London resulted in solid works with Gussie P and Mafia & Fluxy. He began a longstanding link with New York producer Bobby Konders’ Massive B label with big results. “Call Mr. Madden” became a huge hit and its power influenced The Fugees in a big way. King Kong slowed down his prolific output for a while; returning to King Jammy’s and Bobby Konders for a slew of hits around the new millennium. In 2005, “Rumble Jungle Life” (Massive B) kept the vibes alive. The veteran moved to Ethiopia in 2007 and has recorded two tasty albums – “Ethiopian Dream” (2012) and “In The Old Capital” (2017) – that displayed his flow working with international producers. In the midst of a triumphant European tour, King Kong is igniting the massive once again.

As aforementioned, working with international producers has been a wise approach. France based Irie Ites Records is a perfect fit. Since 2003, Jerome and Jericho Irie Ites and crew have built a top grade label, sound system, studio, distribution, publishing and promo agency (Musical Impact) hub that exudes absolute quality. Albums like Ras McBean’s “Pack Up & Leave”, Trinity’s “Eye To Eye” and Mark Wonder’s “Dragon Slayer” are classics. Juggling projects like “Strange Things Riddim”, “Down In Jamaica Riddim” and “Stop That Sound Riddim” never grow old. A committed collective that keeps the integrity intact every time.

“Repatriation” brings together some of the best in the business. A two year project with international cooperation. Riddims courtesy of Roots Radics, Sly & Robbie, Bongo Herman, Dwight Pinkney, Leroy Mafia, Russ Disciples, hornsman Gilles Le Cossec, riddim masters Naram & Art and Irie Ites All Stars. Vocals were recorded and mixed at Irie Ites Studio by Manuel “Jericho” Malhoeuvre and Judi K. Riddims were mixed by legendary Calvin “So So” Francis; whose mastery has graced countless Irie Ites projects, Mafia & Fluxy… to name a few. Quite an ensemble of musicians and engineers assembled here!

“Money Could A Buy” ignites from the first spark. King Kong rolls out a blazing anthem that listeners will fulljoy! Riding a classic Roots Radics riddim, his delivery is more seasoned and retains equal potency to his early hits. “Because di road to success bring a lot of sweat.” Lyrics just rolling in his signature style that seams into some tuff chanting on par with I Roy or Jah Woosh. Pure reality episode that will rock the space. “Gwaan” excels on all levels. Riddim masters Naram & Art construct a compelling Rub a Dub riddim that the veteran rides front and centre. A pertinent number marking the return of King Kong and observance of proper runnings in the dance. He displays nuff versatility with wailing and his rolling chant style that grabs upfront attention. Crisp excursion indeed!

“Pree The Money” pulls no punches; brimming with urgency and reality. Naram & Art recall the Firehouse vibes found on “Two Big Bull Inna One Pen.” History recalling as mid ’80s vibes are forward again. “An Inna Swiss bank weh di whole ting lock.” Undiluted observation of money grabbers and the plight of the sufferer. Another granite tuff anthem that has chart busting elements. Crisp and clean mix in fine style! The title track is Roots controller. Naram and Foundation percussionist Bongo Herman kick up a Jammy’s caliber riddim to the max. King Kong delivers the importance of going to Ethiopia and the infinite power of The Most High. His years living in Shashamane style has reflected on deep levels within his Heart and Soul. Standout selection that demands repeated listening. Boom!

“Change” is the real deal. Driven by Sly & Robbie frequency, this is lyrics to riddim potency. The Riddim Twins constructed heaps of killer Digi riddims during the ’80s and this is no exception. A powerful message for the youth to change their ways to Rightful trod. The lyrics master is on spit Fyah delivery that swings from his instantly recognizable style to killer chanting style that swings with truth and conviction. Instant rewinder for sure! “Old School” was released prior to the album’s release and created a musical stir. Three the true way – elevated by Burro Banton and Pinchers; what a crucial trifecta of enduring veterans. Gladness to hear more and more from Delroy “Pinchers” Thompson, after a hiatus, he’s been nicing up some stellar projects recently. UK veteran Russ Disciples supplies a KILLER riddim that the veterans ride to the maximum. Each artist is in top form. The balance of Burro Banton’s tuffness, King Kong’s power and Pinchers’ sweetness results in one heavy duty anthem! This should be in heavy rotation on every radio station across Creation! Respect to these “old school” champions.

The excitement continues with “Just A Grow.” Over a tasty Naram construction with possibly Dwight Pinkney adding crucial licks, the veteran bubbles with Royal flow. A positive excursion reminding listeners he’s here to stay with guidance from The Most High. Sincerity and authenticity exudes throughout. Dancehall tight on “Wake The Town” featuring Eek A Mouse. Mr. Hylton has been proper on a slew of recent works and his combination is worthwhile here. Over a bubbling Irie Ites All Stars riddim (sounding Roots Radicsesque), the duo step royal with a double dose of champion sound. Sound system ready with bin shaking capability. Put this inna heavy stereo. “Rootsman Skanking” gives Babylon a spanking! Irie Ites All Stars firing with riddimatic power and King Kong delivering with Heartical manners. In an intoxicating singjay approach, Rastafari trodding is front and centre. Gladness to hear such versatility from King Kong.

“Dancehall Teacher” is sizzling hot! Riddim strong from Irie Ites and hornsman Gilles, this is a tuff excursion. The atmosphere recall the early ’80s; before Digi riddims stormed in. Strictly flowing style with Rub A Dub runnings intact. Great mix with Dubby overtones. “Licky Licky” is absolutely essential. The years rewind as a Jammy’s caliber riddim pulsates. Pure reality anthem that harks back to the killer frequency from “Musical Confrontation” (split album with Nitty Gritty from 1986). King Kong at his best! The album closes with “After Midnight.” Another musical travelling back to Jammy’s sound of the mid-late ’80s. The horn work by Gilles adds Ites texture. “Tonight is a Dancehall warning… hear sound boy calling.” King Kong takes the listener back to late night Kingston dances with potency and depth.

Conclusion King Kong's 12th album is satisfaction guaranteed. The Dancehall veteran and Irie Ites present one of his finest albums to date and has the power to be one of the premier albums of 2018! Highest recommendation! GO DEH!